Hundreds of area residents turn out for Aug. 2 public meeting on closing access to I-495. 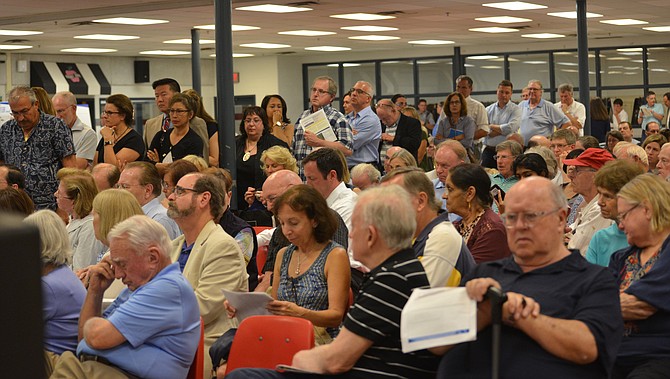 Having their say: Several hundred attended the public meeting to discuss the VDOT proposal to test closures on the Georgetown Pike ramp to I-495. Many came prepared to make comments and lined up to do so. Photo by Andrea Worker.

“It was unbelievable. I witnessed some of the most aggressive and dangerous driving I think I have seen anywhere in the United States.” —Garrett Moore, VDOT chief engineer

VDOT chief engineer Garrett Moore presents the proposal to limit access to the northbound Capital Beltway from the Georgetown Pike ramp to alleviate traffic congestion in the area. 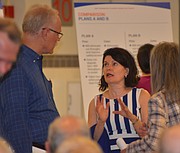 Bill Canis of Great Falls talks about the VDOT proposed pilot plan to State Sen. Barbara Favola (D-31) before the public meeting. Canis, the president of the Great Falls Citizens Association, says the group sees the value in reducing traffic on local roads, but knows that locals use the route to reach schools and jobs in Maryland. 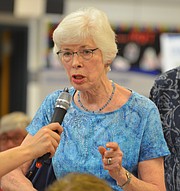 A 50-year resident of McLean, Joanne Theon says the plan is an inconceivable inconvenience to local residents. “It just doesn’t make sense. It’s not a solution.”

“Give it a try,” said Joe Yoon of Great Falls, who thinks the real answer is in a new bridge over the Potomac, but “since we will have flying cars before a new bridge,” Yoon thinks it’s worth testing the plan.

The Virginia Department of Transportation listened when citizens in McLean complained that commuters passing through their neighborhoods to connect to the Capital Beltway via the northbound entrance ramp from Georgetown Pike were causing traffic congestion. Residents are sometimes trapped in their own driveways.

Catherine Lorenze of McLean says it can take her an hour or more to travel the 2.1 miles from her home to Langley High School, where two of her children graduated, and a third is an incoming freshman.

“It affects their schoolwork, their participation in afterschool events and activities. I know parents who no longer let their kids get involved in some after school programs, just because it can be impossible to get there and back in a reasonable amount of time.”

Lorenze wants to see a survey among local parents about traffic effects on school activities, and hopes the test program will gather more information.

VDOT’s chief engineer, Garrett Moore, visited the area to get a first hand look at what the complainants were experiencing.

“It was unbelievable,” said Moore. “I witnessed some of the most aggressive and dangerous driving I think I have seen anywhere in the United States.”

VDOT immediately got to work, studying the problem, holding public meetings in September of 2017 and May of this year and forming a regional advisory group representing affected stakeholders.

Short and intermediate term improvements were put in place. Temporary traffic monitoring cameras were installed, along with additional regulatory signage and the intersection was painted to discourage drivers from stopping “in the box” when making the turn onto the ramp and causing further congestion. VDOT even widened the shoulder on the north side of Georgetown Pike at Balls Hill Road to allow police to safely enforce traffic violations.

DESPITE THESE EFFORTS, the problems persist.

Following additional study and the performance of some scenario modelling, at a public meeting at McLean High School on Aug. 2, Moore outlined a possible next step – a four-month pilot program testing the closure of the northbound I-495 ramp at Georgetown Pike. The VDOT study suggests closing the ramp on weekdays, from 1-7 p.m.

Local resident Graham Jones questioned the lengthy shutdown period. It’s recommended because “drivers adjust to the new conditions,” said Moore. Drivers change their drive times as much as they can, leaving earlier or later than normal and then causing different traffic choke points, according to VDOT studies.

“It’s unique. It’s a radical approach,” admitted Moore, who said that the plan would not go forward without “strong support from the community.”

Since the models show that there could be improvement, with relief to traffic in the surrounding neighborhoods, Moore said they felt compelled to bring the proposal to the public for discussion.

Several hundred area residents – and a few from other parts of the county – attended the meeting to hear the full scope and rationalization of the proposal and to have their feedback delivered in person to officials like Moore, and VDOT’s Transportation & Land Use Director for Northern Virginia, Allison Richter.

Before and after the meeting Comstock, Favola and Foust were surrounded by constituents, wanting to make their opinions known. Foust, for one, is not convinced the proposal is the answer, but in a phone interview earlier in the day, he said he would consider the recommendations and listen to what his constituents wanted.

Those constituents lined up quickly to voice their views during the public commentary period.

“Nothing they can say will make me believe this a viable option,” was Joanne Theon’s reaction to the proposal. A fifty-year resident of the area, Theon says the closures would cause great inconvenience to local residents.

“Why didn’t VDOT listen to us before?” she asked, when residents complained that “dumping the HOT lanes right here” would only add to the traffic pileup before and after the Georgetown Pike ramp.

Michael Mahoney of Langley Oaks is another opponent of the plan. Mahoney has a list of other ideas that should be considered “long before taking this drastic step.” Mahoney says that officials “aren’t using what’s already available to us,” like road shoulder usage with green and red arrows similar to what has been used on I-66, or widening the ramp, or utilizing other road services - what he called the “zipper roads” - such as the road under the Route 123 bridge.

Several of the attendees expressed the concern that while the plan might improve the Beltway traffic flow – although Moore repeatedly used the term “a wash” when describing the potential change in Beltway traffic movement as a result of the ramp closure – it would simply send the bottleneck further down the line, toward the already congested interchange with the Dulles Toll Road, and further down I-495 to Tysons and beyond.

“And what about other neighborhoods, like those along Route 7, Lewinsville Road and around Tysons?” asked several of the commenters. As much as the McLean residents want a solution to their traffic woes, most did not wish to achieve that goal at the expense of others.

IN RESPONSE to those concerns, Moore said that VDOT would “stress test” other areas that appear to be adversely affected by the ramp closures.

Jeffrey Parnes was one of those who pointed out that “there is more going on here” and any proposed solution cannot be so microscopically focused in his estimation. The Oak Hill resident commented that Fairfax County and the Commonwealth of Virginia have “spent millions … to encourage economic development by the relocation of industry, commercial and residential uses to our county” but that infrastructure has not kept pace to support the growth “not just in the Tysons area, but the whole Dulles Corridor, including Reston, Herndon and Vienna.”

Without solving the real issue, Parnes said, “you are removing my ability to transverse state and interstate roads to solve a purely local problem.”

While possibly not in the majority, there were those who expressed approval – even if sometimes with reservations – for the proposal.

Lorenze, the local resident who experiences the “ridiculous” journey from home to Langley High School, is willing to give it a shot. She defends the plight of public school parents fighting to get to Langley High School or Cooper Middle School, versus the inconvenience caused to those who chose private schools in Maryland or the District. In the public school system, parents “don’t have that choice of where to send their kids.”

Lorenze wants VDOT to survey parents in conjunction with area schools to see just how increased traffic in the last two years has affected their children and participation in sports, after-school activities, and other school events.

“Have the courage to move forward with this pilot VDOT,” Lorenze urged in the comments she emailed after the meeting. While the plan may not work, she feels it is an opportunity to gather data, and Lorenze says doing nothing is “simply not acceptable.”

Great Falls resident Joe Yoon also thinks the pilot program should be given a try. “We need the data to make the right choice.” As for affecting traffic further south along the Beltway, Yoon says “those are roads that can still be changed, adjusted, unlike Georgetown Pike.”

Yoon, in agreement with the comments of several of the attendees, said that the ultimate solutions are vast improvements to the American Legion Bridge and a new bridge over the Potomac. Since Yoon thinks “we will have flying cars before a new bridge,” he is willing to support the four-month pilot program. “Let’s see what we get and go from there.”

INFORMATION about the proposed plan is available on the VDOT website www.virginiadot.org and at the Northern Virginia District Office at 4975 Alliance Drive, Fairfax. VDOT is asking the public to submit their comments and suggestions via email to Allison Richter at meetingcomments@vdot.virginia.gov, including “McLean Area Traffic Analysis” in the subject line. VDOT will be updating the site with a summary of comments received and any actions take. Another public meeting will be held in the fall.