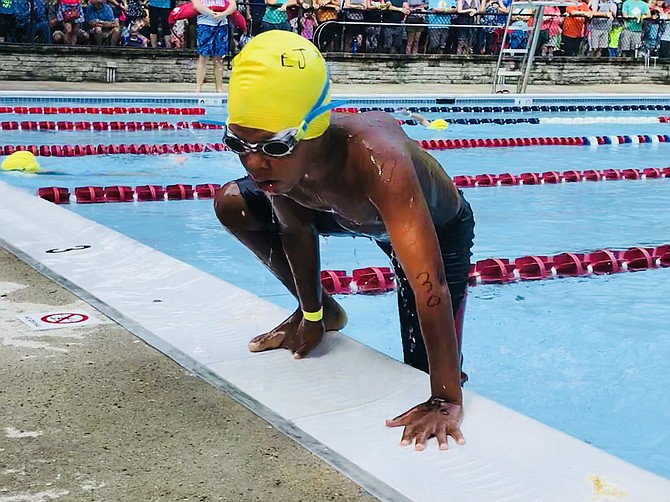 #30 in the 6-8-year-old division of the Reston Kid's Triathlon leaves the pool and gets ready to run to his bike, get dressed, and speed off for the second phase of the tri. Photo by Mercia Hobson. 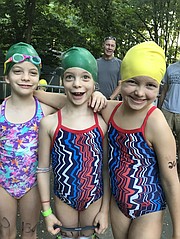 Addison Schimmel, 8, Emily Schimmel, 8, and their friend, Riley McFawen, 8, all of Reston, get ready for the eighth Annual Reston Kid's Triathlon held Sunday, Aug. 5 at the Ridge Heights Pool in Reston. 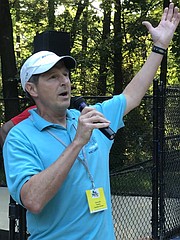 Larry T. Butler, Acting CEO and Senior Director of Land Use and Planning, Reston Association, welcomes all to the eighth Annual Reston Kid's Triathlon and calls attention to the sky, pointing out, at last, it is not raining. 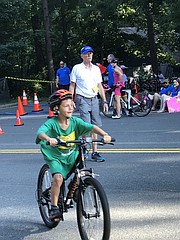 Sergio Sandeli, 7 of Arlington, pedals as fast as he can at the start of bike section of the Reston Kid's Triathlon held Sunday, Aug. 5. His dad, Rob, stood on the sidewalk and after his son flew by he commented, "My children love to race, and they are all very competitive."

Youth athletes from across Reston and surrounding communities participated in in the eighth Annual Reston Kid's Triathlon held Sunday, Aug. 5 at the Ridge Heights Pool in Reston. Children as young as age 6 through age 14 took part in the event that included a swim, bike and run.

Reston Association and the YMCA-Fairfax County, Reston co-sponsored the triathlon with proceeds donated to the Y to assist families and individuals who need financial aid for Y programs.

Age groups for the triathlon were split between 6-8, 9-11 and 12-14 with a broad spectrum of abilities and experiences represented in each group. The massive volunteer support team stood ready and committed, providing the children with an outstanding and very organized experience.

Distances in the race varied by age groups and just like in adult triathlons, the children were body marked and wore official chip timers.

Larry T. Butler, Acting CEO and Senior Director of Land Use and Planning, Reston Association, said "It was great to see about 200 young athletes giving it their all on the course today. This eighth Annual Reston Kids Triathlon, which was put on by Reston Association and The YMCA-Fairfax County Reston, tested both first-time triathletes and veterans on the swim, bike and run courses fully supported by many community volunteers. Our hope is that these kids will latch onto at least one of these sports to carry them into the future with healthy and active lifestyles."