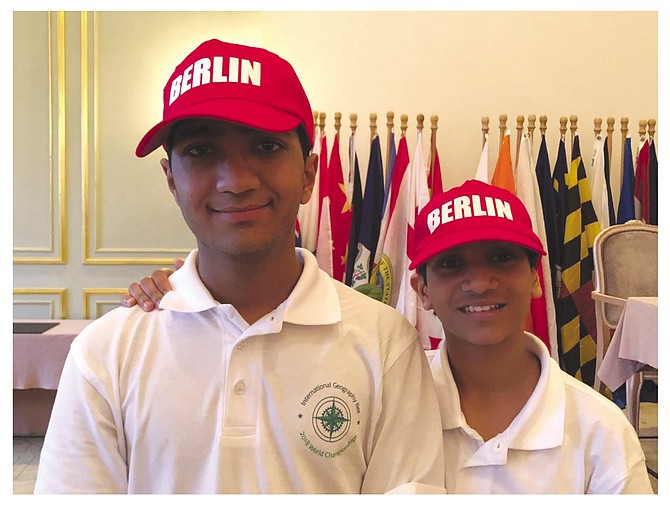 Rohil and Samik Bhinge (ages 14 and 13) got back last month from Berlin, Germany, where they represented the State of Virginia at the International Geography Bee World Championship. ABC 7 channel aired an interview with the family the day before they flew to Berlin.The Bhinge brothers, who are both First Place United States National Champions in the International Geography Bee, brought home a total of 6 medals – 2 golds, 1 silver and 3 bronzes.

One of the fun team events was a Treasure Hunt where students had to travel extensively on the Berlin Metro locating historical landmarks and taking quizzes to earn points. David Madden is the founder of the International Geography Bee. Madden won 19 consecutive days at Jeopardy in 2005 for a winning total of $432,400 (all time seventh highest).

Both Rohil and Samik have been interested in Geography since their pre-school days.They are current school champions and they both have competed at the State and National levels at various geography competitions.

After the Berlin championships, the boys spent a day in Istanbul (Turkey) and then Rohil and his father, Deepak went backpacking to Athens and Thessaloniki (Greece) and Sofia (Bulgaria). Rohil’s best moment of this trip was a 1-hour scooter ride in the Greek Island of Aegina. Samik enjoyed riding the Berlin Metro during the competition and visiting the Olympic Stadium and Potsdam Palaces.

Rohil is a rising 10th grader at the Woodson High School and he loves to travel all over the world. He has visited 38 US States and 16 countries. As a freshman, Rohil competed in the “It’s Academic” competition on NBC and helped his high school team win the first-round playoff in January 2018.