The replacement for Station 33 should be operational in 2021. 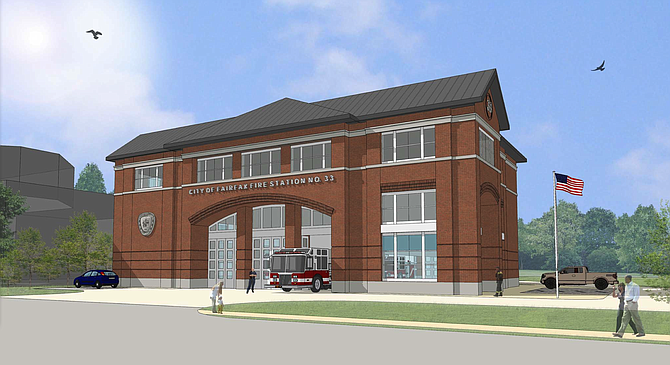 Architect’s rendering of the new Fire Station 33, as seen from Fairfax Boulevard.

Architectural drawing of the new fire station from the parking lot.

Fairfax Fire Station 33 is going to be demolished and rebuilt.

Since the City’s Fire Station 33 along Fairfax Boulevard has nearly reached the end of its useful life, it’s going to be demolished and rebuilt. It was originally constructed for a single-engine company, so its design no longer meets the needs of the modern-day Fire Department.

The current station doesn’t have enough space to adequately store equipment, and its ready-reserve apparatus has to be housed off-site. Besides that, says Fire Chief John O’Neal, a new facility will increase the Fire Department’s operational readiness and also improve safety, health conditions and quality of life for the staff.

Total cost – including demolition of the old building, as well as design, engineering and construction of the new one – is estimated to be $9.6 million. The City’s financial advisor, Davenport & Co., recommended lease financing as the most cost-effective method for Fairfax to take to fund the station replacement, and the City Council agreed and is moving forward with it.

The firm of Lemay, Erickson, Willcox Architects is designing the new building. And after several meetings with City staff, it presented its proposed interior and exterior renderings to Council members during a recent work session.

“The building footprint is slightly larger than the existing building and is in the same location,” said architect Michelle Perry. “The front will be slightly closer to Fairfax Boulevard, with aprons in the front and rear of the building.”

She said the new facility will have three engine bays, instead of just two, like the existing station has. It will also have a much larger support area, a large control room and 25 parking spaces, instead of 20, as now. The second floor will have administrative spaces on the right – three offices and a conference room – and a training area to the left. The third floor will feature the dining and kitchen areas, plus bunks for 14 people.

“There’s the potential for a green roof and terrace to the rear of the building,” said Perry. “And that roof and side wall could also be used for firefighter training, We developed a traditional and familiar building design, but with some contemporary features, including a large, dramatic archway over the three bays. The brick and cast stone add the traditional elements.”

Councilman Jon Stehle asked about security, and O’Neal said there’ll be a secure vestibule. Councilman Michael DeMarco asked if the new building would impinge on the Resource Protection Area, but Perry assured him that it will encroach less on it than the existing building does.

She also noted that the driveway and surface areas for the fire engines and ambulances in the bays will be concrete, but the parking area will be asphalt. However, O’Neal said they could also consider installing some pavers in the parking lot for more pervious surface.

Calling the new station a “handsome building,” Councilwoman Janice Miller asked how the construction would be managed. Project Manager Rick Thoesen, with the City’s Department of Public Works, replied, “I prefer using the architect to take care of things salient to construction, and I’d help the Chief with change orders, etc.” He also said it would be cheaper than hiring a construction-management firm.

As for the project timeline, construction bids are expected to be posted and reviewed between January and March 2019. A contractor should then be selected by that spring. O’Neal said groundbreaking is anticipated by June or July of 2019, with construction completed in December 2020 and a “move-in date of January 2021.”