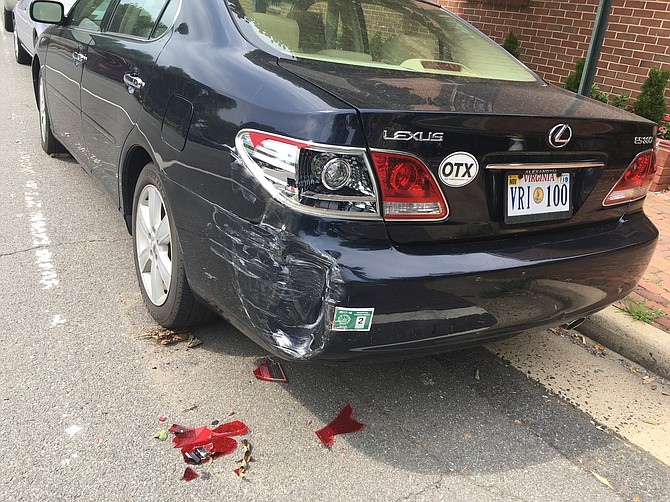 Result of a tour bus side swipe on Princess and Union. Photo courtesy of Van Van Fleet

It’s about time that our great city ban tour buses from the Old and Historic District.

I have been saying for years both verbally and in print that these enormous 45-60 foot vehicles cannot easily negotiate corners when cars are parked near an intersection. Our 1749-designed streets cannot handle these humongous vehicles. Just in the past week an acquaintance of mine parked her car on the corner of Princess and Union, only to have it sideswiped by a tour bus thereby causing thousands of dollars worth of damage. On numerous other occasions I have almost been hit by tour buses attempting to turn one of those sharp corners.

Obviously one solution to this problem would be to disallow corner parking spaces, but this would contribute to the overall shortage of residential parking spaces which we can ill afford to do. In addition, their sheer weight, density, and excessive speed create vibrations that have an adverse effect on the many 18th and 19th century residences to be found in this area. They also damage sidewalks in addition to grazing parked cars. On many of our narrow streets such as Lee Street, cars cannot proceed safely with a tour bus staring them in the face.

It is also obvious that the tour bus drivers are not informed of current regulations, since they continue to park in unauthorized places, block traffic, idle for very long period of times (adding to the already high levels of pollution in Alexandria), and sometimes display an arrogant attitude when confronted about breaking the law. “Visit Alexandria” an organization funded by the city, needs to better inform the tour bus companies before they come here.

Many Old Town residents have long suggested that a designated tour bus parking location be created (e.g., Masonic Temple, Eisenhower Avenue). In a similar manner to what New Orleans, Charleston and Savannah have done, passengers could be shuttled or trolleyed into the Old and Historic District. This would be a way to control daily tour bus traffic without impacting Old Town’s businesses, which are an integral part of this city’s economic engine.

Let’s do something about this insane tour bus behavior. The city does not need to convene another tour bus “Ad Hoc Committee” to solve this problem. The council, the planners and the Transportation and Environmental Services all know this problem well enough to take the appropriate corrective actions now.