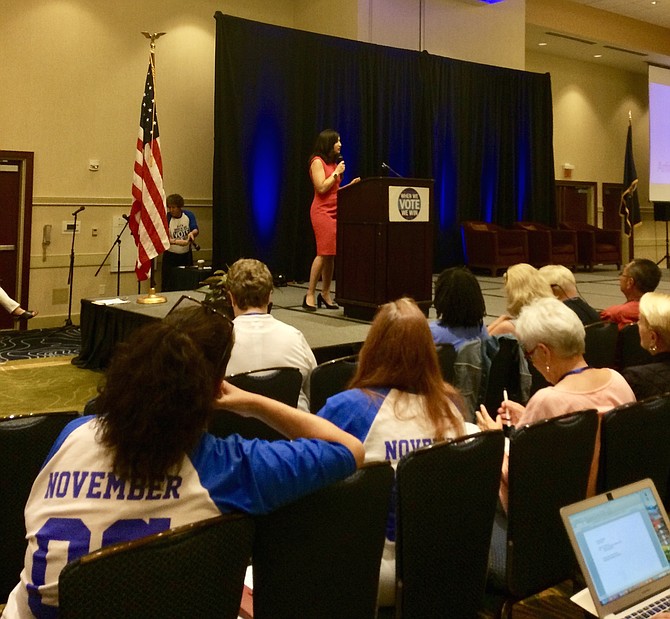 Katie Cristol, chair of Arlington County Board, addresses the crowd at the Women’s Summit in Dulles, on June 23. Photo by Eden Brown. 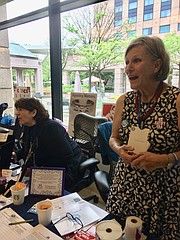 Marge Signer, president of the Virginia chapter of NOW, responds to a question from an attendee of the Women’s Summit about Virginia NOW and the demand for additional rape kit reform measures, a cause supported by Arlington County Commission on the Status of Women member Caroline Gary, Chair of Arlington County Board Katie Cristol, and state Sen. Barbara Favola. Gary founded Rally Against Rape and Sexual Assault – a grassroots, community-action project dedicated to combating sexual violence and raising awareness about the prevalence of rape and sexual assault in Northern Virginia. VA NOW asked summit attendees to join them in pressing the General Assembly, Governor, and Office of the Attorney General for additional progress on testing rape kits, and ensuring survivors get justice and communities are safer. To get involved, visit legislativecp@vanow.org.

“The United States was like a two engine plane that had been operating for centuries on a single engine; imagine what could happen if we started the other.” — Mary Sue Terry, first woman to be elected Attorney General in Virginia

Rape kit reform, the rape crisis hotline, and Inova’s new FACT clinic were a few of the “women’s issues” highlighted at the annual Women’s Summit held June 22-23 at the Hyatt Regency Dulles in Herndon.

Chair of Arlington County Board, Katie Cristol, addressing the crowd, said that since becoming operational a few years ago, thanks to Arlington residents, the hotline now serves 1,200 to 1,500 callers a year — everything from individuals in crisis, to survivors seeking counseling services well after their assaults have occurred, to family members and friends looking for resources to support loved ones.

Cristol also mentioned the new 24 hour forensic and physical and mental health services at Inova Hospital’s FACT Clinic — a significant improvement from the long wait times — and sometimes diversions to other hospitals far from Northern Virginia — in the region.

In her remarks to the group of women, Cristol celebrated Mary Sue Terry, the only woman to ever hold statewide office in Virginia; she was elected to be Attorney General in 1985 and re-elected in 1989. Cristol quoted a speech she gave that Cristol attended in 2006, where she said, referring to the lack of gender diversity in the government, that the “United States was like a two engine plane that had been operating for centuries on a single engine; imagine what could happen if we started the other.”

At the Women’s Summit, Cristol added that, watching all the women in the audience who were ready to run for election and otherwise support women’s issues, she “could imagine Mary Sue Terry’s plane, and when I think about what Virginia women achieved in 2017 and all the potential in this room, my friends, I can hardly hear you over the engine noise!”

Details on the Arlington 24/7 sexual assault and domestic violence crisis hotline can be found at www.doorwaysva.org/our-work/securing-safety/immediate-safe-response/.