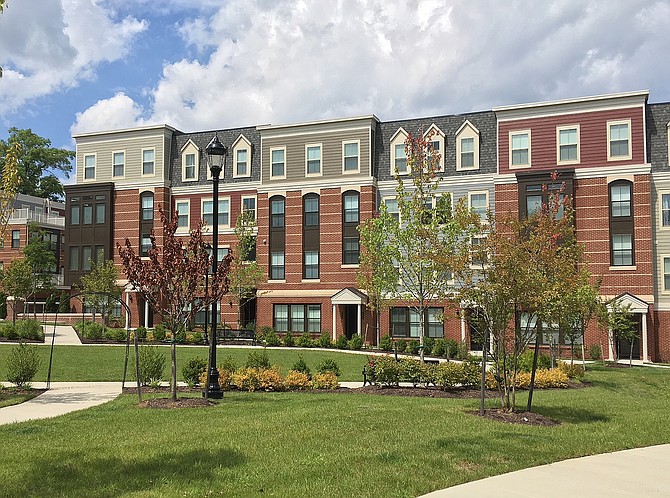 A view of some of the new Mount Vineyard homes and interior courtyard. Photo by Bonnie Hobbs.

The City of Fairfax is an exciting place to be because new things are always on the horizon. Looking toward the future, several development projects are either proposed or in the works. Below are details about some of them:

The Oak Knolls Realty Corp. is redeveloping the former Oak Knolls apartment complex into Mount Vineyard, which will boast 102 brand-new condos and 30 townhouses. The site is 6 acres along Main and Oak streets in Fairfax. Being constructed are two, 32-unit condominium buildings with elevators; 38 stacked condo units and 30 townhomes, for 132 units total.

They’re all for-sale units. The four-story, 32-unit condo buildings will have red-brick, fiber-cement siding, metal railings, stacked siding and bay windows on the corners. And a red-brick, courtyard wall along Oak Street will offer privacy to the 22-foot townhome units.

The developer is undergrounding all utilities on site and in the adjacent rights of way on Oak and Main streets, constructing a bus shelter, donating money for improvements in nearby Pat Rodio Park and contributing $550,000 to the City of Fairfax toward affordable housing. It’s also making streetscape improvements, providing a pedestrian connection to the park and reducing about 95 percent of the site’s surface water flow.

The homes will feature “green” building practices and other contemporary amenities, including rooftop terraces and garage parking. Mount Vineyard is the site of the former home of Richard Ratcliffe, the city’s original architect. The community’s design incorporates several of the mature oak trees on Oak Street, plus a commemorative marker honoring Ratcliffe and Mount Vineyard. Construction is almost complete and should be finished later this year. Meanwhile, many people have already moved in and made this neighborhood their new home.

Site plan for the revitalized Fairfax Shopping Center, which will be renamed Point 50.

Fairfax Shopping Center will be revitalized and renamed Point 50. This development will include a Whole Foods 365 grocery store, plus a restaurant and two other retail uses in three, separate buildings. And Fairfax officials hope this project will be a catalyst for future residential and mixed uses in the City’s Northfax area.

This already-approved, mixed-use development will replace an obsolete strip mall with 400 Class-A apartment units, 29,000 square feet of retail divided between two buildings, plus a Giant Food store – which will be a 54,000-square-foot, full-service, grocery store with pharmacy. Two parking garages are also part of the project.

Dubbed a “transit-oriented development,” it’s located at Fairfax Circle and flanked by Fairfax Boulevard (Route 50), Lee Highway (Route 29) and Pickett Road, so it will have easy access to and from major highways. And once the lease agreement was signed with Giant, the project’s construction schedule was accelerated and site-preparation work has already begun.

CBG, Clark Builders Group, will construct the all-rental apartments, and 6 percent of them will be affordable housing. Two buildings will have retail uses on the first level and five stories of residential above. There’ll be some 3-bedroom apartments, but most will be 1- and 2-bedroom units. Parking-garage entrances will be from Route 50 and from a back street.

Planned for the 8.33-acre site were 403 multifamily apartments, 24 of which would be affordable dwelling units. Also slated were 29,000 square feet of first-floor commercial uses – 25,000 square feet would be for retail and a restaurant, and a 4,000-square-foot office space would be dedicated to the nonprofit CASA, Court-Appointed Special Advocates.

But in February, the applicant asked to amend the project. The new proposal maintains all the apartment units. But it features a more varied mix of apartments, including studios, 1-bedroom, 2-bedroom and 3-bedroom. Furthermore, the commercial space has been reduced to just 19,136 square feet, including the 4,000 square feet for CASA.

The remaining 15,136 square feet of commercial use is proposed as a restaurant, plus ground-floor retail. One of the previously approved buildings has been removed from the plan and the footprint of another has been revised. And the pool has moved from the roof of the garage to behind one of the other buildings. The City Council public hearing on these revisions is tentatively scheduled for Sept. 11.

The plan also contains a through street with a connection at the Bevan Drive signal at Fairfax Boulevard, plus a new, un-signalized entrance on Lee Highway. The community’s road network could correspond to the future redevelopment of the rest of the Kamp Washington triangle, while treating the section connecting Lee Highway to Fairfax Boulevard with several, traffic-calming elements to reduce cut-through traffic.

Also planned are trails connecting to adjacent properties, plus open space including a 5,600-square-foot contemplative space next to the Jermantown Cemetery. Novus will maintain this space and the cemetery.

The Paul VI High School site will be redeveloped when the school moves to Loudoun County.

In 2020, Paul VI High School will move from its 18.5-acre home in the City of Fairfax to a much larger site in Loudoun County. And developer IDI Group Cos. hopes to redevelop this land along Fairfax Boulevard after the school leaves. The property also includes two, adjacent, single-family lots on Cedar Avenue.

For the past 2-1/2 years, IDI executive Enrico Cecchi has proposed various incarnations of a complex, mixed-used development there, but many residents believe it would be too dense. So he’s met with them and with City staff several times to come up with something more palatable.

At the June 12 City Council public hearing, the latest revision contained 295 residential units comprising 131 townhouses and 164 condos, 20,000 square feet of retail in two buildings, plus 24,000 square feet of commercial and/or community uses in the retained, original portion of the school building. Fifteen of the townhouses along Fairfax Boulevard would be live/work units with retail on the bottom.

The new, retail buildings would be one-story and to the east and west of the remaining school building. Overall, building heights would be one to five floors, with three floors adjacent to neighborhoods. A four-story, multifamily building would face Oak Street, with a five-story building behind it.

Drivers would access the site via an existing entrance from Oak Street and four points along Fairfax Boulevard. No vehicular connections are proposed between the site and McLean, Cedar or Keith avenues. A service road would run the length of the Fairfax Boulevard frontage, and Fairfax Boulevard would have slow-lane parking.

IDI would also add a shared-use path along McLean and Cedar avenues and a 10-foot-wide walkway along the Fairfax Boulevard frontage. The amount of open space was increased, and the site will contain pocket parks and a village green. Ultimately, though, the public hearing was continued until Sept. 11 when the Council is slated to act on the proposal.