Memorabilia sale to include Ireland’s Own Reagan table. 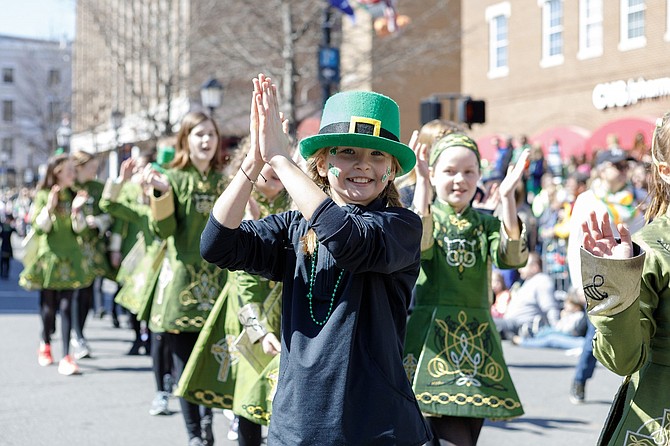 Proceeds from the Alexandria Irish Festival, including this year’s auction items, will go to support the 2019 St. Patrick’s Day Parade. Photo by Mark Mogle.

“This year’s festival will be dedicated to Pat. What a nice way to honor him.” — Pat Troy’s widow Bernadette 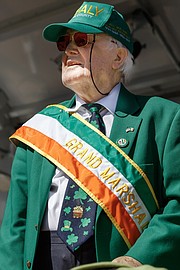 President Ronald Reagan, seated at right, made a surprise visit to Pat Troy’s Ireland’s Own Restaurant on St. Patrick’s Day in 1988. The table he occupied that day will be auctioned off Aug. 25 during the Alexandria Irish Festival.

Pat Troy was larger than life, a proud Irishman who would tell anyone who listened that one of the highlights of his life was when President Ronald Reagan made a surprise visit to Troy’s Ireland’s Own Restaurant on St. Patrick’s Day in 1988.

Until Ireland’s Own closed in 2014, the table Reagan occupied that day held a prominent place inside the restaurant. On Saturday, Aug. 25, that table, along with other storied memorabilia from Ireland’s Own and Pat Troy’s personal collections, will be sold during the Alexandria Irish Festival.

“That is a very special table,” said Bernadette Troy, Pat Troy’s widow. “Reagan’s visit was a complete surprise and it is a part of history. Now that the restaurant is closed it needs to be somewhere it can be seen and appreciated.”

Bernadette Troy will also be donating several items that belonged to her husband, including the tweed jacket he wore when he first arrived in the U.S. from Ireland.

“Pat always kept that jacket as a souvenir,” said Bernadette Troy. “We’ll also be offering the kilt and sporran he used to wear and some of the pins he had collected since first opening the restaurant more than 30 years ago.”

The Alexandria Irish Festival will take place Aug. 25 from 11 a.m. to 7 p.m. at Waterfront Park. Entertainment will include Irish dancers and pipe bands and craft and food vendors will also be on hand.

Festival proceeds, including from the sale and auction items, will go to support the 2019 St. Patrick’s Day Parade. In 1980, Troy co-founded The Ballyshaners for the purpose of organizing a Saint Patrick's Day Parade in Old Town. The all-volunteer, nonprofit organization’s goal is to promote and preserve Irish Heritage.

“This year’s festival will be dedicated to Pat,” said Bernadette Troy. “What a nice way to honor him.”