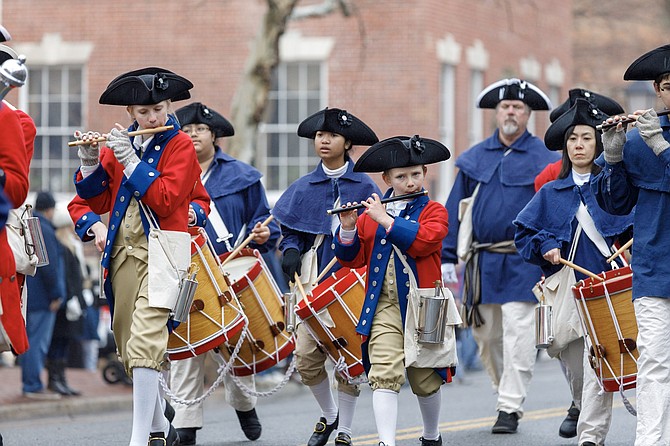 The George Washington Birthday Parade celebrates the birthday of the nation’s first president with the country’s largest parade in his honor. It is one of Alexandria’s many festivals and parades that draw thousands of visitors to the city. Photo by Mark Mogle.

“This is a very special place. No other place celebrates the history and innovation of our nation.” — Astronaut Buzz Aldrin on the Inventors Hall of Fame in Alexandria 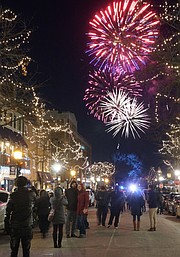 The fireworks finale of First Night Alexandria lights up the sky over the Potomac River to ring in the New Year. The family friendly event features live performances in Old Town and Del Ray culminating with the only New Year’s Eve fireworks display in the region.

The Alexandria Singers, a pops chorus, will hold open auditions for new members on Sept. 11 and 18.

The annual Scottish Walk Parade is one of Alexandria’s signature events and attracts tens of thousands from around the region.

Welcome to Alexandria, known as the hometown of such notables as George Washington and Robert E. Lee. The city was also home to Jim Morrison, Mama Cass Elliot, Willard Scott and House of Cards creator Beau Willimon.

Dig a little deeper and you’ll learn that U.S. President Gerald Ford was a longtime resident, that Miss World 2013, Megan Young, is an Alexandria native and that U-2 pilot Francis Gary Powers lived here after he was released from a Soviet prison in 1962.

At 15.4 square miles and with a population of just over 150,000, Alexandria hosts nationally recognized events such as the Scottish Walk and Del Ray’s Art on the Avenue. But off the beaten paths of King Street and Mount Vernon Avenue are attractions such as the Tomb of the Unknown Revolutionary War Soldier and the National Inventors Hall of Fame.

“This is a very special place,” said astronaut Buzz Aldrin of the National Inventors Hall of Fame when he attended an event there. “No other place celebrates the history and innovation of our nation.”

Another Alexandria landmark is the Captain Rocky Versace Plaza and Vietnam Veterans Memorial. Located in front of the Mount Vernon Recreation Center, the plaza honors the 67 Alexandrians who lost their lives in the Vietnam War.

One of the city’s most obvious landmarks is also one of its best-kept secrets. Located on 36 acres overlooking Old Town, the George Washington National Masonic Memorial was built in the 1920s as a memorial and museum highlighting the contributions of Freemasons to the United States. The structure also serves as a research center, library, community center and performing arts center and offers one of the best panoramic views of the city.

Tucked away on a side street in Old Town is the less obvious “Spite House.” At just 7 feet wide, it is one of the tiniest historic homes in the nation. Built in 1830, the private residence was constructed by John Hollensbury using the existing brick walls of the adjacent homes to prevent horse-drawn wagon traffic from using the alleyway.

King Street in Old Town and Mount Vernon Avenue in Del Ray serve as the shopping and dining hubs of the city. Both are lined with locally owned boutiques and restaurants. The free King Street Trolley runs from the “river to the rails,” bringing riders from the waterfront to the King Street Metro station seven days a week.

The many arts and entertainment offerings in town include the Birchmere, MetroStage and The Little Theatre of Alexandria. The Alexandria Symphony Orchestra, which performs at the Rachel M. Schlesinger Concert Hall and Arts Center on the campus of Northern Virginia Community College, is considered one of the finest in the nation.

If you’re looking to perform yourself, a variety of classes are available for children and adults at LTA’s home on Wolfe Street, where Dermot Mulroney and Academy Award winner Marcia Gay Harden honed their craft. The Alexandria Singers, a pops chorus, also holds open auditions for new members.

It doesn’t take long for even a newcomer to realize that Alexandria is a city that loves its festivals and parades, starting with the largest George Washington birthday celebration in the country and ending the year with First Night Alexandria, a day-long celebration that culminates with a fireworks finale over the Potomac River.

There are no shortage of accolades for Alexandria, from being named a Top Holiday Town by USA Today to being recognized as having the best downtown of any small to mid-size city in the nation by Livability.com. So spend a few years or stay for a lifetime — there really is no place like Alexandria to call home.