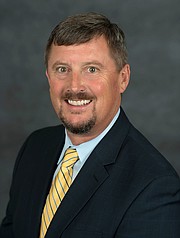 Deliee will oversee 800 students and about 90 staff at Centre Ridge, which is in the Centreville Pyramid. The school has an ethnic breakdown of 23 percent white students; 37 percent Hispanic; 12 percent Black; and 23 percent Asian based on 2016-17 stats. There are 17 percent percent of students in special education and 54 percent on free or reduced meals.

“It’s a very diverse population. We don’t have a majority so we represent several different countries. About 31 percent are English language learners — with English as their second language. With that, the population comes from a variety of backgrounds, countries and experiences, so we work hard to celebrate that diversity and give everybody the opportunity to celebrate their background and diversity,” he said.

He added: “Our focus is on the ‘Portrait of the Graduate’ skills and we spend a lot of time on project-based learning for students, communication, collaboration, and teamwork, so within our classrooms, the students spend a lot of time in small groups.”

Some of the special programs at Centre Ridge include a Heritage Night in the spring where the community comes together wearing international costumes and sharing food from their native countries. There’s also RAM Night — Reading and Math Night — as well as a PTA-sponsored Bingo Night and Family Movie Night at the school.

He added: “As a principal, it’s providing the resources for our students and families and staff to allow them to be successful here. That’s the biggest challenge — to make sure everything is in place so everybody can be successful.”

His personal goal as principal is to increase community involvement. He also wants to empower students to feel successful and learn to really love learning.

“And that’s the biggest one — to get our students to love learning every day,” he said. “For the staff, my goal is to be able to provide opportunities for them and resources for them to come together as a school-wide team and be able to build the relationships with their students.”

What he loves most about the job is the people, he said. “I got into teaching originally to work with students and 29 years later it’s still the thing that excites me every day — getting to work with the students, the families and the staff. It’s something new every day and I look forward to it,” he said.

He works closely with the PTA and meets with them every month to go over business. He said they are very involved by sponsoring activities and helping to organize classroom supply lists. “I hope we can continue to increase the membership and provide an opportunity for families to be able to come in the school and feel like they have the opportunity to support their child,” he said.

According to Dr. Angela G. Atwater, assistant superintendent, Region 4: “Mr. Deliee, as the new principal of Centre Ridge Elementary School, is known to possess a leadership style of clear communication, consistency and collaboration. Mr. Deliee’s transition from assistant principal to principal has allowed the school to continue working without interruption. Mr. Deliee recognizes the needs of the Centre Ridge community and the students, staff and parents trust his leadership. Mr. Deliee believes that building relationships is key to student success. He values community outreach and will continue to seek opportunities to bring the community resources into the school.”

Added David Jagels, principal of Centreville High School: “I have known Chip since he was a teacher and coach at West Springfield High School. Chip has always been kid-centered in all that he does. He has the ability to build strong relationships with everyone he meets. He is emotionally intelligent and compassionate, which will make him a great leader. It is an honor to have him with us in the Centreville pyramid. We have already begun to collaborate and he is already having an impact. I am excited to be working with him.”

Deliee grew up in Burke and graduated from Lake Braddock Secondary. He earned a degree in special education from James Madison University and started his career as a special ed teacher at West Springfield High School where he helped coach boys’ soccer and girls’ basketball. From there he went to the Fairfax County Central Office, in the Professional Learning and Accountability branch. He then held assistant principal positions at Saratoga and Centre Ridge before taking on the principal job there.

“Being the assistant principal has helped me with the transition and allowed me to start to focus on specific areas that I know we need to continue to develop at the school. It’s really special place and I’m really excited to be the principal because the community and staff are amazing,” he said.

Deliee is married to wife Sharon of 23 years; the couple has three children: Brendan, 22; Kristopher, 20; and Amanda, 16. He also has a brother, Kevin, who teaches at West Springfield with his wife Madeleine.