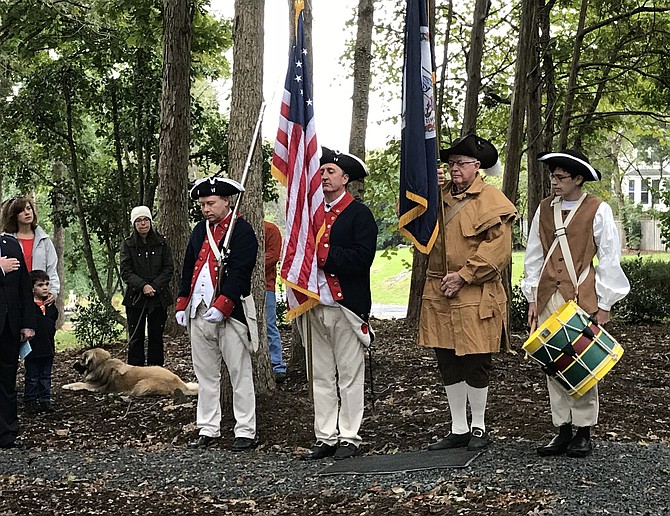 The ceremony opened with the presentation of flags by a four-person color guard from the Fairfax Resolves chapter of the Sons of the American Revolution costumed in 18th century uniforms. Photo contributed

Lidia Soto-Harmon, the CEO of the Girl Scout Council of the Nation’s Capital, with Senior Girl Scouts Lauren and Elizabeth Bradshaw.

A small celebration was held Saturday, Oct. 20, in the Gate Post Estates community, away from the crowds of Centreville Day, but still commemorating an important piece of the town’s history. Senior Girl Scouts Lauren and Elizabeth Bradshaw coordinated and emceed a rededication ceremony for a Revolutionary War-era family cemetery that is the final resting place of one of the founders of Centreville and Patriot, John Orr, and his family.

As part of their Girl Scout Silver Award, the 13-year-old twin sisters coordinated the effort to clean out and preserve the Orr Family cemetery which is located in their neighborhood. Their completed project was commemorated with a half-hour ceremony attended by 52 friends and neighbors.

The ceremony opened with the presentation of flags by a four-person color guard from the Fairfax Resolves chapter of the Sons of the American Revolution costumed in 18th century uniforms. Remarks were given at the ceremony by Del. Tim Hugo (R-40) along with Lidia Soto-Harmon, the CEO of the Girl Scout Council of the Nation’s Capital. Mary Lipsey from the Fairfax County Cemetery Preservation Association, addressed the group, and the Rev. Carol Hancock, Rector of St. John’s Episcopal Church, delivered an invocation.

The Orr Family cemetery is located in Gate Post Estates on a land that is owned by the homeowners’ association, but it had fallen into disrepair and become overgrown in the last 30 years. Clean-out of the cemetery involved clearing weeds, vines, and undergrowth, cutting saplings and dead trees, removing trash and branches, and raking and bagging eighty bags of leaf litter and debris.

Working in conjunction with Lipsey, the girls located fieldstone head stones and foot stones from the 1790s and identified 28 graves. To preserve the grave area, stone markers were encircled with pea gravel to delineate them, and 3,000 periwinkle ground cover plants were planted. Volunteers placed seven tons of gravel to create a walking path through the cemetery, and the area was spruced up with 12 truckloads of mulch. Kline Memorials of Manassas, owned by Chris and Rick Burroughs of Gate Post Estates, donated a granite marker at the entrance to the small cemetery.

Lauren and Elizabeth began work on this project over the summer when they contacted and gave presentations to numerous historic and civic groups in the area to raise awareness and funds for the project. Clean-out began in mid-July, and over the weekends involved more than 300 man-hours of work by 50 volunteers from Girl Scout Troop 3327, the Alpha Rho Chapter of Eta Sigma Alpha: the National Homeschool Honor Society, Gate Post Estates neighbors, and other friends.

Lauren and Elizabeth presented their project on the main stage at Centreville Day and then were awarded a Young Historians’ Grant by the Friends of Historic Centreville. In their remarks, the Girl Scouts thanks local businesses who contributed to their project: Kline Memorials, RulyScapes, Davey Tree, Luck Stone, Village Landscapes, Home Depot, and Lowes, in addition to monetary donors: Fairfax County Cemetery Preservation Association, Fairfax Resolves Chapter of the Sons of the American Revolution, Del. Tim Hugo, Anthony Cascio of Centreville, and Jim and Carline Grove of Kennesaw, Ga. The Silver Award is the second highest award Girl Scouts can earn.