‘It’s All about Helping Others’ in Fairfax
Votes

‘It’s All about Helping Others’ in Fairfax 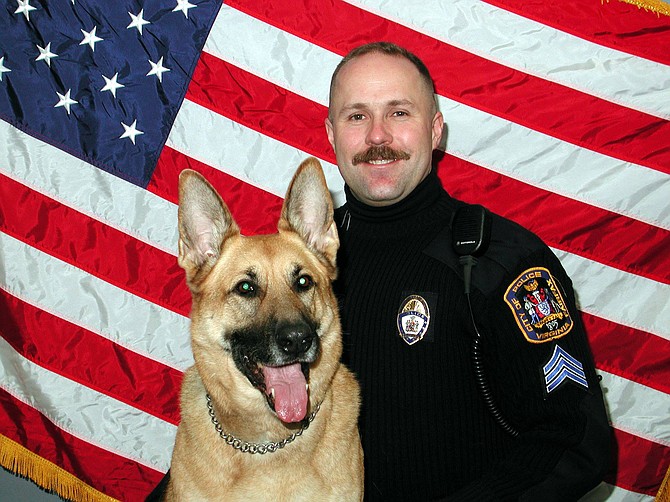 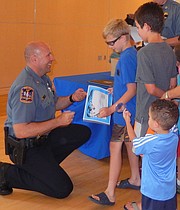 After spending 30 years as a City of Fairfax police officer – the last 4½ as chief – Carl Pardiny retired Dec. 1. But whoever replaces him will have big shoes to fill.

Joining the force as a patrol officer in 1988, he started the Police Department’s Bike Patrol and K-9 programs, plus its first evidence-based, community-policing projects. He’s earned the respect of his officers, Fairfax residents, City staff and officials and leaves behind a legacy of leadership.

“Thirty years has been a very fulfilling career,” said Pardiny, 52. “My primary consideration in deciding to retire is my family – being able to spend more time with my wife, children and grandchildren. It’s my turn to give back to them. But I couldn’t think of a more rewarding career than being a police officer, especially one in the City of Fairfax.”

“We’re a small, but progressive, department, so each member has opportunities to wear multiple hats,” he said. “Over the years, I’ve been afforded these opportunities, and things I started as a young officer – like our first bicycle patrol – can make a really big impact in the community. Our officers can also work on, for example, the SWAT Team, Crisis Negotiations Team, K-9 program or get training as evidence technicians or criminal investigators, in addition to their day-to-day responsibilities as patrol officers.”

PARDINY also enjoyed the community-outreach events, such as Cops & Kids, and seeing adults who attended them as children return with their own children. “Our residents are so supportive and interested in ensuring that this City is a great place to work and live,” he said. “And City staff from all the departments goes above and beyond to make sure we help our employees do a great job to give the best services to our community.”

What he’s treasured most about his job are the networks he’s built and friendships he’s made over the past three decades. “That really makes coming to work fun,” said Pardiny. “Policing is tough; it’s a dangerous job, and I worry about placing our young officers in harm’s way. But we’re hiring the best people and providing them with the best training possible to ensure their success in keeping our community safe and protected.”

Also important, he said, is teaching them to de-escalate high-risk situations to protect the lives of those they potentially have to arrest. “Hiring a diverse, well-educated group of men and women reflects our community and its values,” said Pardiny. “And we provide them with opportunities to earn advanced degrees in college or to specialize in a particular career path that enhances our services.”

He said being a police chief is about seeing that everyone in the department is held accountable, has sound supervision and employs the best practices in policing. So this job’s given him the chance to make “a positive difference in the way we police our community and ourselves, internally.”

“I love working with the new officers,” said Pardiny. “They have so much enthusiasm and show so much promise. They’re the ones who’ll lead this organization in the years to come, so promoting great supervisors and command staff is important because of their abilities to mentor, teach and lead by example.”

Among his achievements as chief were initiating and helping draft the City’s dog-tethering ordinance, starting Kids’ Safety Saturday and Cops & Kids, and expanding the department’s use of social media to keep the public informed.

He also assisted in closing the Jesse Matthew case. Charged and tried for the 2005 attempted capital murder, abduction and sexual assault of a 26-year-old woman in Fairfax, Matthew was ultimately sentenced to three life terms in prison.

Pardiny pushed through the creation of the new, firearms training facility and helped implement the department’s body-worn camera program in December 2016. He began the exchange zone in the station’s parking lot so online buyers and sellers could meet in a safe place, and he drafted the City’s bike-helmet ordinance, which City Council approved.

Furthermore, his department and Fairfax County’s partnered on a diversion program for nonviolent youth under age 18 to keep them out of the formal, juvenile-justice system, reduce recidivism and help them learn from their mistakes in a positive, meaningful manner.

CITY POLICE also mentor schoolchildren at lunchtime. “It shows them our officers are people, just like everybody else,” said Pardiny. “We’re there to help and serve as role models.”

But he stresses that he didn’t accomplish all these things, himself. He said it was possible because he worked with a “dedicated, energetic, enthusiastic team that’s passionate about doing a great job.”

Currently, the department is aiming toward becoming nationally accredited again and has begun a peer-support group. “Not just the big, tragic events, but many small events adding up over time can take a huge toll on an officer,” explained Pardiny.

He also praised the “amazing police chiefs” who mentored him throughout his career – Lloyd Smith, John Skinner, Doug Scott and Rick Rappaport. He said Rappaport taught him to see the big picture and think through issues and problems intellectually, get multiple perspectives and apply all he’s learned to solve problems. “They taught me how to think about where we want to be, several years down the road, and how we can get there,” said Pardiny. “Being a chief requires being surrounded by talented people and great bosses, like them and former City Manager Bob Sisson.”

“Education’s been a big part of my career, so I presented a plan to the City – which was approved – to reinstate funding for tuition assistance for our officers and support staff,” said Pardiny. “Eventually, I’d like to work on a Ph.D – something in criminology – and/or teach at university level as an adjunct professor. I want to give back to the next generation of law-enforcement officers and leaders.”

“There are ups and downs in everyone’s career, but you work through the challenges, take your licks, pull yourself up, learn lessons and become better for it,” he said. “And I can say I’ve worked in a job for 30 years that I’ve loved, been passionate about and has fulfilled me.”

Pardiny won’t miss the middle-of-the-night phone calls and text messages about serious incidents in progress. But he will miss “working with the officers and the great people in the community. My greatest satisfaction was being able to help people within the department and the City.

“I’m so impressed with how much our residents, business owners and community leaders care about this City,” he continued. “That’s what’s kept me here, all these years.

“I thank the community for its support, because they help make our City safe. And I thank City staff and leadership, plus members of our Police Department, for always providing great input and advice. Having their trust and respect has been really important. It’s been a wonderful career, and I’m so happy to conclude it as the chief. But it’s all about helping others.”