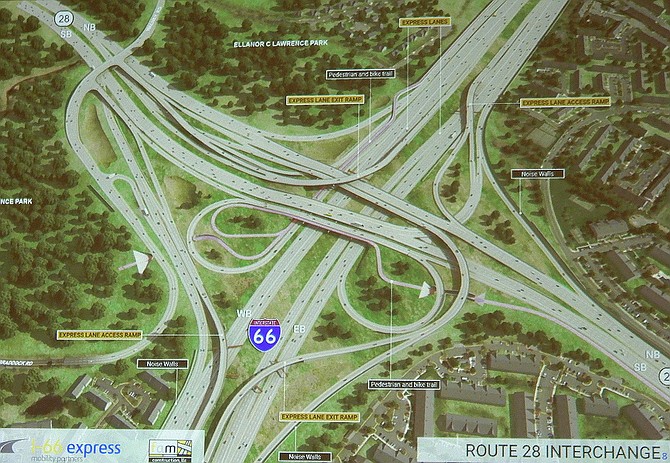 Diagram of the Route 28/I-66 Interchange project.

With so many road projects happening at once in the local area, Centreville and Chantilly residents got an update recently about the ones affecting them most. Hosting this Transportation Town Hall were Supervisor Kathy Smith (D-Sully), Del. Karrie Delaney (D-67) and the Sully District Council.

It was held in the Sully District Governmental Center, and both Fairfax County and Virginia transportation officials presented details of the various projects. They also displayed several maps and answered residents’ questions.

“I serve on the Transportation Committee in the General Assembly, so transportation issues are part of my focus as your delegate,” Delaney told the meeting attendees. “One thing all Northern Virginians have in common is transportation problems. And this event lets you ask specific questions of the staff that deals with these issues every day.”

“We have a lot of projects going on, and it’ll be painful for a while,” said Smith. “But in the end, it’ll be to our benefit.”

Tom Biesiadny, director of the Fairfax County Department of Transportation, discussed Route 28 improvements. “We’re working on the Route 28 widening between Route 29 at the Bull Run bridge in Prince William County and Route 29 in Centreville,” he said. “It’s planned for eight lanes with an HOV lane, ultimately. But we’re currently working on a six-lane roadway, plus various options at the Route 28/Ordway Road intersection.”

He said a noise analysis is being done to determine where noise walls will go. Then, said Biesiadny, “It must be both feasible to be built and able to be built for a reasonable amount of money for the number of people it benefits. We’re also working on the 2040 traffic analysis.”

Improvements are planned at all signalized intersections by adding turn lanes and/or one or more additional lanes on side streets. Doing so would eliminate split-phase, signal operations and improve overall intersection operations. Being considered are:

“A portion of southbound Route 28 has already been widened to New Braddock,” said Biesiadny. “And we’re considering the triple left lanes from westbound New Braddock to southbound Route 28 because traffic is very heavy there.” Overall, it’s a $76 million project, and the NVTA (Northern Virginia Transportation Authority) has provided $26 million. The rest will come from other state and federal sources.

“We’re putting together a design-build contract that we hope to have done sometime this fall,” said Biesiadny. Construction isn’t anticipated to start until summer 2020, with substantial completion expected in spring 2023.

He said the county is also working on finishing the widening of Route 50 northbound to McLearen Road. It’s currently six lanes to McLearen and eight lanes north of there to the Loudoun County line. Estimated cost is $20 million, but the funding has yet to be approved.

Speaking next was the NVTA’s Keith Jasper, talking about NVTA-funded projects and future plans. “We deal with traffic congestion in Northern Virginia,” he said. “Our process is comprised of planning, programming and funding, and we have both long-range and six-year transportation plans. If nothing is built but what’s being built or is already funded now, growth in population and employment will lead to worsening travel conditions. So that’s something we need to work on.”

Noting that the NVTA is “more interested in regional corridors than in individual jurisdictions,” Jasper said that, “Starting in June 2020, we’ll have $400 million [in funding] every two years” to allocate to projects. He said NVTA money went toward the Route 28 widening because that highway contains some of Northern Virginia’s “worst bottlenecks.”

Susan Shaw, VDOT’s Northern Virginia megaprojects director, discussed the I-66 Outside the Beltway project. “Future Metro stations are envisioned for Monument Drive, Stringfellow Road and somewhere in Centreville,” she said. “We’re continuing to work on traffic and noise analyses, and we’ll be removing the traffic signals on Route 28 from mid-2019 to the end of 2020.”

She also noted that, during the I-66 widening, VDOT is “committed to keeping four lanes of traffic open during peak periods.” In addition, Route 28 improvements being made as part of the I-66 project are as follows:

Shaw said the E.C. Lawrence access road will be by the ballfields there. “Poplar Tree Road will have a four-lane bridge going over Route 28, but the road will stay one lane in each direction,” she said. “Construction will tentatively begin in 2020. And we’re opening up the I-66 median at the Route 29 interchange.”

For years, local residents have wanted Braddock and Walney reconnected across Route 28, and Shaw said that project will also include a trail along both roads. As for the Poplar Tree Road extension, it will go from Newbrook Drive to Stonecroft, and the work will be done around the same time as the bridge is built.

For more information about the I-66 project, go to Transform66.org.