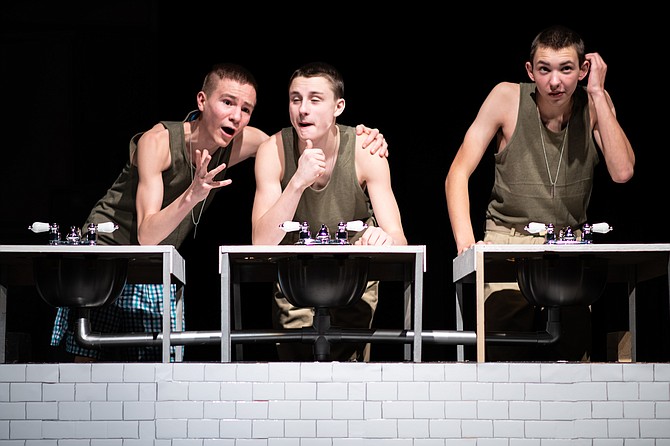 The quotidian life of the young actors involved in Langley High School's production of "Biloxi Blues" likely involves the common woes of America's youth: homework, chores and the like. Through the intricate technical work and innate characterization which this cast and crew brought to their production, a very different period in the country's history was brought to life onstage — one in which teenagers prepared for war, and felt the full weight of that burden.

Neil Simon's "Biloxi Blues" is the second entry in a trilogy of semi-autobiographical plays narrated by aspiring writer Eugene Morris Jerome, a young New Yorker who finds himself at the advent of his basic training for the army in Biloxi, Miss. during World War II. Filled with moments both hilarious and heart-wrenching, Langley's profound production served as a visceral reminder of the moral strife of past generations.

Sporting matching buzz-cuts appropriate for a group of new recruits, the platoon central to the plot of "Biloxi Blues" did not shy away from the mature content of the text, with commendable use of accents imbuing authenticity into their work. The six soldiers executed both crass humor reflective of 1940s culture, and tense confrontations related to the use of racial slurs and the stigmatization of homosexuality. While long scenes staged in the barracks showcased the group's lively chemistry, in smaller scenes each actor revealed the nuances of his character and relationships.

Josh Guinn as Arnold Epstein was effective in conveying the challenges faced by those morally and intellectually opposed to "the Army way," especially as he came into conflict with the intimidating Mark Bosset as Sgt. Toomey. Bosset's realistic representation of a drill sergeant was accomplished through an intensity manifested in his commanding physicality. Tasked with providing a foil to the inexperienced privates, Bosset brought maturity to the role, clearly characterizing Toomey as a man whose fundamental identity was based in his duty to the army.

From the opening moments of the production, Cole Sitilides established himself as the emotional vessel through which the audience would experience the play. Sitilides displayed a sincerity which strengthened his dynamic with each of his scene partners, especially when Eugene left the realm of the barracks and sought to engage fully in life before deployment. With Hannah Cameron-Cadenazzi serving as Eugene's love interest, Daisy, an authentic relationship was crafted in just two short scenes, developing an essential aspect of the play's representation of young men's desires when faced with the inevitability of war.

Langley's student-led production team proved indispensable to the production. Crisp costuming facilitated the actors' embodiment of World War II soldiers, and distinguished the personalities of the few female characters. Natural use of the cyclorama to indicate the time of day and smooth changes in lighting to shift the focus of a scene were both ways in which the lighting crew skillfully clarified the movement of the plot. From the scar on Sgt. Toomey's head signifying the location of a wound mentioned in the script, to the tiling done on a sink set piece used in only one scene, the exhaustive work of the students behind the scenes was essential to exuding the period, and thus the social context, of "Biloxi Blues."

The cast and crew of Langley's "Biloxi Blues" exhibited a complex and profound understanding of a play wrought with challenging themes, crafting an impactful image of American society, both then and now.