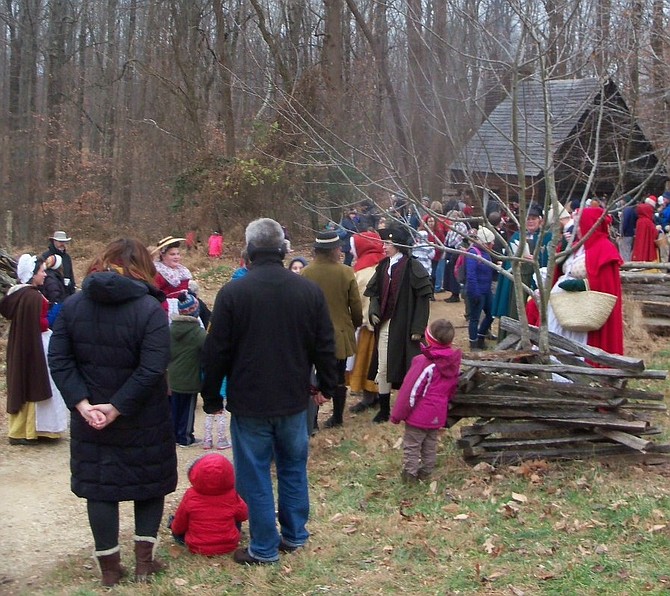 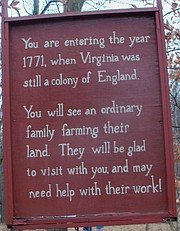 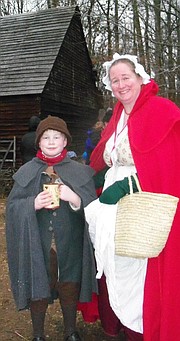 Karen Harris, who began volunteering in 1985, is now assisted by son Alexander.

Northern Virginia is awash with the plantations and magnificent homes of upper-class colonials, such as Mount Vernon. However, only one location reconstructs the lifestyle of the common yeoman farmers who were pushing back the edges of an unsettled frontier. A visitor can find a humble home, shelters for living animals, the animals themselves, a tobacco drying shed and gardens and fields with crops common in those long-ago days. Costumed docents transport the guests to the days before the American Revolution began. The place is referred to simply as “Claude Moore” or “The Farm.”

Sitting on 69 acres of land owned by the Federal government, off Route 193 in McLean, administrative oversight is provided by the National Park Service, Department of the Interior (NPS). After several early years run by NPS, reduced funding threatened the future viability of The Farm. Local community members offered to operate it as a non-profit cooperative. In 1981, The Farm was entrusted to Friends of Turkey Run Farm, Inc.

The expiration date stated in the formal management agreement, as amended, between NPS and The Farm is Dec. 21, 2018.

Under that agreement, organization has been responsible for funding, maintaining, improving, staffing and operating The Farm. A recent annual operating budget exceeded $400,000. Over the life of the agreement, more than $8 million in private funds have gone into operations and another $2 million spent on capital improvements. The Farm has welcomed more than 2 million visitors to view life as lived in the late 1700s before the nation became a nation.

A year or so ago, NPS anticipated the scheduled end of the NPS-Claude Moore agreement, and noted that the language of its terms and conditions was out of step with standardized language common with its other public-private relationships. NPS insisted on revising its agreement with The Farm to bring it into conformity with those other agreements and requirements.

The leaders of the nonprofit found the proposed restructuring of the agreement would be unduly burdensome and expensive and would contribute not at all to continuation and expansion of educational programs and facilities at The Farm. The absence of any suggestion of impropriety by the corporation itself or any of the volunteers conducting operations for more than 37 years was underscored.

After numerous exchanges of views, NPS would not change its position and began pointing to the coming expiration date of the entire management agreement. The nonprofit turned for help to its federal legislators. The Farm is situated in the district of U.S. Rep. Barbara Comstock (R-10). She introduced a bill transferring title to the property to the nonprofit organization, subject to Federal government reversion if use as an 18th century farm ever ceases. With ownership in the private corporation, numerous NPS policies and regulations and requirements for government contracts would be applicable no longer. Costs to NPS would be reduced to less than negligible. The nonprofit was confident that transfer of title would allow it to operate and make capital improvements in the most efficient manner that guarantees the stable, long-term future of a local and national treasure.

Comstock’s bill was favorably reported out of committee last September, with The Farm described as having “a uniquely independent status in the National Park System“and “a model of a successful public-private partnership.” However, the proposal never reached the entire House of Representatives for a vote.

Multiple recent contacts were made to Comstock’s office to learn whether any last-minute legislative efforts would be made to save The Farm. No response was received.

Even less success was had with Virginia’s U.S. Senators, Mark Warner and Timothy Kaine. Neither senator introduced a legislative solution to The Farm’s imminent demise. The final words from Warner’s office were that he had spoken to both the acting director and the current nominee for director of NPS to encourage both sides to agree on an extension of the management agreement: “[A]t this juncture, a mutual agreement is the best productive path forward.”

At this time, nine days remain until the NPS-Claude Moore management agreement expires. Absent a last-minute reprieve — a short extension of the management agreement to permit re-introduction of bills in the new Congress — The Farm will be closed and NPS will allow a reasonable period for the nonprofit to remove all structures and other property from the premises. NPS will then dispose of any items abandoned and the land will revert to the barren field and fringe forest of the landfill existing in the 1970s. NPS has given no hint of possible future uses for the acreage.