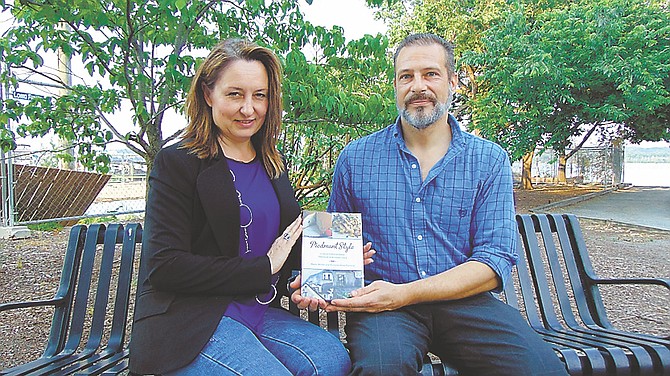 Mount Vernon residents and co-authors Mauro Molino and Nicoletta Shane Scarnera have written the book, “Piedmont Style – A Delectable Journey Through Northern Italy.” Molino, a classic chef by trade and Scarnera, an intellectual property rights lawyer, spent eight months researching and writing the 144 Northern Italian recipes, including 36 homemade desserts. The 336-page book offers an historical account of Italy’s Piedmont region with a month-by-month recipes and references to folk traditions, as well as historic insights of the recipes and ingredients.

“We wanted to give the history, the experience, and we wanted to give something more than regular recipes — the pleasure of sitting together at the table.” —Mauro Molino

The duo structured the book into 12 months with each having three different meals, and every meal having four recipes – appetizers, first course, second course and dessert. To illustrate, the September Menu # 3 includes: Cow’s Tongue with Traditional Green Sauce; Gnocchi with Boar Sauce; Rabbit in White Wine with Olives and Potatoes; and Ricotta Cheese Dessert.

An example was the semolina pasta, Gnocchetti Sardi, which became a staple in the Piedmont region because Piedmont belonged to the Kingdom of Sardinia, and so with people travelling from one part to the other, this recipe traveled from island of Sardinia. “So, we tried to explain why a certain recipe landed in the Piedmont. We wanted to have the reader interested in not only the recipe but also the history of the recipe itself,” she said.

In another example, she highlights the Nutella and Mascarpone Cheese Fudge Cake recipe, on page 306. “After the second World War, the pastry chef Pietro Ferrero wanted to give birth to a dessert based on chocolate, but it was rare during the war. So, they tried to substitute it with hazelnuts, which are spread in the Piedmont region. So, that dessert became so popular, and he founded the Ferrero Company in 1946. His son (Michele) was the one who transformed the tough piece of chocolate into cream of chocolate. They came up with the combination of ‘Nut’ and ‘Tella,’ because it sounded nice — the final name was Nutella,” she said.

Shane Scarnera had been a regular at Molino’s restaurant, the DRP Pizzeria in Belle Haven, and she mentioned that she loved his food; he told her that he’d like to make a cookbook and she agreed. She said Molino then started cooking in her kitchen and they started writing the first draft of the recipes; they tested them to make them as best as possible. Through different drafts, they came up with the final version of the recipes themselves. “It was a pleasure for me to watch a professional chef cooking in my kitchen with the target of writing our cookbook,” she said.

She added: “I always loved reading and cooking and I spent many summers in Piedmont. I used to spend summers cooking and learning their traditions. Piedmont is attached to France; it was under the Royal House of Savoy so there are many recipes — some French origins, so it’s a subject that always attracted me. When I discovered that Chef (Molino) was from that region, it was a perfect match.”

Molino, who lived and went to school there, and whose grandmother was an excellent cook, decided to become a chef. “As a joke, I said with my experience, why not put my ideas in a book — my experiences, my recipes on paper and give it to somebody else.”

Molino said they personally taste-tested every recipe. “Everything was made between the two of us. We figured out the doses; we measured everything. We actually did it. We know it works because we put it together.”

Molino describes his cooking style as classic — traditional with Italian, French, and old-fashioned cuisine. “I really care about all of the ingredients. We work with local produce — very seasonal food. I don’t do cherry tomatoes in January; I don’t do eggplant in December. In the summer, I’m not going to do something very heavy with creams and sauces.”

Shane Scarnera added: “There is a lot of emphasis on the meat. We tried to be as open-minded as possible and made soups and salads from the region, always making reference to the tradition of the region…. We still remember our grandparents cooking that particular recipe -- salad, dish of pasta, or gnocchi. We wanted to put the attention of the region so we always made recipes that go back generations, and at the same time, we wanted to show the creativity of the chef — so adding a little touch here and there.”

He added: “What we were trying to achieve is tell the history about why people are cooking the meat and blanching vegetables that way — because we wanted to teach more than just making the food. We wanted to give the history, the experience, and we wanted to give something more than regular recipes — the pleasure of sitting together at the table.”

She said her favorite recipe in the book is the Capon with a Foie Gras Stuffing for the “complexity of the taste, the earthiness of the recipe, the elegance, the game and the foie gras combined. I can imagine myself appreciating the dish with a good glass of red wine and just enjoying the recipe itself and the company of good friends or members of the family,” she said.

Molino’s favorite recipe is the Tagliatelle al Ragu, a kind of pasta with wild boar ragu. “The richness of the ragu, really rich with the lightness of the pasta, put together — we have only fresh pasta and it’s amazing. It creates a wonderful dish,” he said.