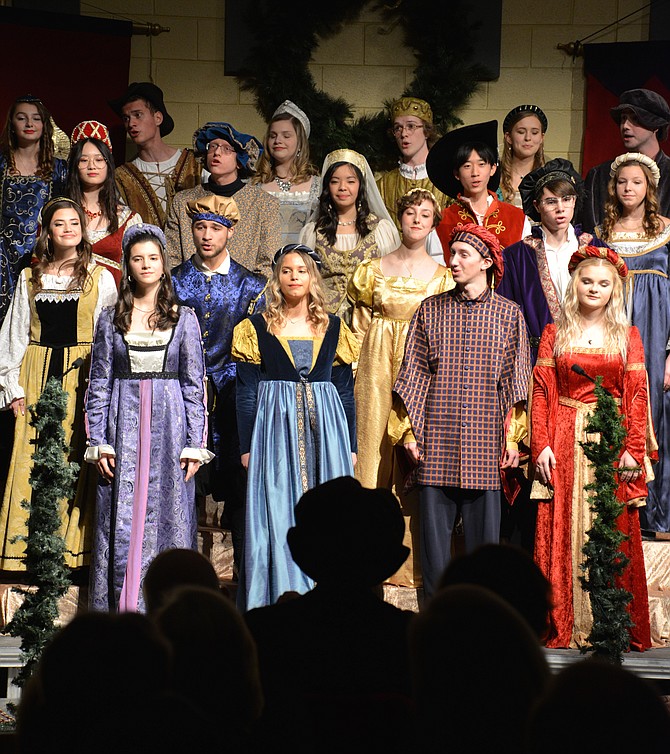 The Langley High School Madrigal Singers outdid themselves at the 17th annual edition of the Choral Department’s Renaissance Feaste. Harmonious madrigals, a bit of history, and the antics of a couple of jesters entertained a packed house of guests during the themed dinner. Photo by Andrea Worker.

“Now bring us some figgye pudding!” The pages of the Langley High School Choral Department Renaissance Feaste comply with that request, escorting a faux figgye pudding into the “halle.”

For the seventeenth year, the talented members of the Langley High School choral groups and a small army of countless other technicians, volunteers, supporters and additional cast members treated a “halle” full of “gueysts” to a re-creation of a Renaissance Yuletide celebration, circa 1584, for two dinner performances on Friday, Dec. 7, and Saturday the 8th.

The “halle” – the large open space that leads to the school’s theatre – was transformed into a medieval dining hall, complete with long communal dining tables, banners, and “candlelight.” The appropriate atmosphere was struck from the moment guests entered, greeted by a line up of costumed singers – and a jester or two. With the sounds of merry Christmas carols to accompany them, the attendees were then personally escorted to their tables, after, of course, being properly announced by their “pages,” where the first course of their feaste – a cheese, bread, and fruit plate – already awaited them.

THE LANGLEY MADRIGAL SINGERS took center stage – literally - at this performance. From the “First Fanfare” which was the welcome, to the Seventh, which was the post-dinner concert, the Madrigals told the story of this type of traditional Yuletide gathering, imparting a little history with a bit of humor and a lot of awe-inspiring harmonious madrigal singing.

In between enjoying their Cornish pasties of beef or chicken with a cup of wassail to wash it down, the diners learned that the English adopted the Italianate form of singing in the 16th century.

By the “modern” 1500s, the madrigal had become a sophisticated art form, the feaste-goers were informed, with “overlapping sections of single voices in some portions, some with voices singing the text all together… other sections with each voice part being interesting and independent.” It was part of the education of noble or wealthy ladies and gentlemen of the time to be trained in the art of singing.

The Madrigals Singers, and in fact the participating Langley Treble Choir, the Select Choir, the Minstrels, the Concert Choir and the singers who played the pages and the jesters have all, indeed, been well-trained in their art form under the direction of Dr. Mac Lambert, Langley’s Choral Director.

Together, the young singers gave a performance that would not have been out of place at any professionally-staffed concert hall. If truth be told, they really were that good.

Before allowing the “gueysts” to dig into the victuals, one of the fair ladies unrolled a lengthy scroll and read out the rules of the house, titled “the Book on Curtasye.”

The diners were admonished to “avoid querrlying and making grimaces with other gueysts,” or telling “unseemly tales at the table,” nor to “wype theyre greezy fingers on theyre beardes” as part of the proper etiquette for guests at the manor house.

FOR THE BETTER PART of two hours, the Madrigals sang songs of intricate harmony, while telling their tales and melodiously celebrating the arrival of each “Fanfare:” Welcome, Processional and Wassail Bowl, Dinner Concert, The Boar’s Head, the actual main course, the “Flaming Figgye Pudding,” and the after dinner concert.

Thankfully, the “boar’s head” was not the real deal. Both the “head” and the “pudding” were carried into the “halle” with much ceremony by a duo of pages, who completed their tasks without mishap, despite the “harassment” of the jesters.

When the plates were cleared away by the “serving wenches and fellows,” there was still more songs to be sung, before the troupe made their thank-you speeches to all, from Langley principal Kimberly Greer, school administration, Sarah Kirk, Guild president, Sydnee Calderwood, Feaste Chair, Lori Taylor, accompanist, director Lambert, Cooper 8th grade students for joining the serving staff, and enough more generous helpers and supporters to fill another score of scrolls.

Then it was time to declare the feaste closed for another season, and guests wished-well on their departure and offered the best of holidays seasons and new year.

Proceeds for the Feaste benefit the school’s choral program. The quality and enthusiasm of this performance and its ability to foster a high-note seasonal spirit is reason enough to already mark your calendars for next year. Perhaps we can entreat the Ghost of Christmas Future to persuade the singers to add a performance or two to next year’s gathering so that even more can “make merrye” during the festive season.