The Stage is Alive with The Sound of Music in McLean 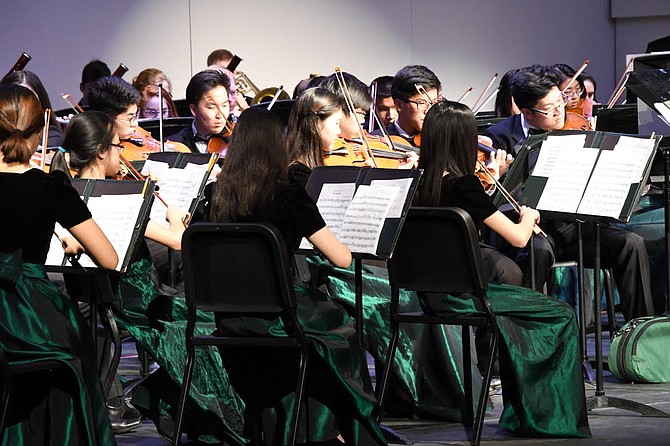 The violins and violas of the Langley High School Philharmonic Orchestra dazzle their audience with music of famous Austrian composers. Photo by Helen Beckner

On a not so cold December evening, Langley High School Orchestra transported a packed auditorium to Vienna. No, not the nearby town – Vienna, Austria. Aside from being the music capital of the world and the home of many of the classical greats, Vienna is also the orchestra’s destination for this year’s spring trip. A combination of a traditional Austrian feast, lavish decorations, German speakers (orchestra students from Langley’s German language department), who announced the pieces in both German and English, and of course wonderful music, the concert succeeded in bringing a little bit of Viennese charm to McLean.

The concert opened with a chamber group of Philharmonic members presenting the Austro-Hungarian anthem “The Emperor’s Hymn,” by Franz Joseph Haydn. A lively piece, sophomore and second violinist Claire Fulton describes it as her favorite part of the concert, and the perfect way to “get the audience in the right spirit.”

The Philharmonic Orchestra continued with the “Magic Flute Overture,” a Mozart classic, with members of Langley’s band. Lyrical in its flowing runs, the song paints a picturesque image of Vienna landscape. Next, the Philharmonic performed the “Finale from the Trumpet Concerto,” of Franz Joseph Haydn. The triumphant melody alternated between the orchestral strings and soloist Forrest Johnston, a senior in Langley’s Wind Symphony and principal trumpet in both the All-Virginia Band and the American Youth Philharmonic Orchestra last year. Many of the audience members were swaying in their seats or gazing in awe at Forrest’s skillful trumpet playing. The Philharmonic concluded with “Morning, Noon and Night in Vienna” by Franz von Suppe, featuring senior Christopher Fox and sophomore Fay Shuai, solo cellists in the Philharmonic. Both have played in the All-Virginia Orchestra last year. As the name suggests, the piece takes a musical journey from a soothing morning to a boisterous night in Austria’s capital.

As the Symphonic Orchestra settled on the stage, pianist and cellist Cao Linh Pham, a junior in the Philharmonic, played Johannes Brahms “Rhapsody in g minor,” on the piano.

Fully assembled, the Symphonic Orchestra presented the Allegro from Beethoven’s “Piano Concerto No. 3, Op. 37.” A nearly 17-minute endeavor, the piece featured Karina Wugang, a junior in the Symphonic Orchestra. Karina, who has been preparing this piece since the beginning of summer, stunned the audience with her brilliant piano cadenza towards the end of the concerto. This intense piece was followed by a strings only performance of the Ländler from Gustav Mahler’s “Symphony No. 1 in D Major.”

A quick interlude was used to showcase the talents of Madeline Yu, Alyssa Kim, and Lauren Cain, all members of the Philharmonic Orchestra, in Shostakovich’s “Pieces for 2 Violins,” with Madeline and Alyssa fulfilling their roles as first violins, and Lauren as the pianist.

As the trio’s melody echoed through the auditorium, the Concert Orchestra, conducted by assistant director, Adam Willett, set up for their performance. They began with Mozart’s “Symphony No. 29.” While many of the students will say their favorite part of the evening was the delicious Apple Strudel from Heidelberg Pastry or the specially made Chicken Schnitzel from Listrani’s, Zachary Sutton, a senior bassist in the Symphonic Orchestra, thoroughly enjoyed the Concert Orchestra’s final piece, Johann Strauss Sr.’s “Radetzky March, Opus 228.” A crowd pleaser, Dr. McCormick and Mr. Willett decided to make the piece an interactive experience by having the audience clap out the march’s beat during key moments in the piece. For this very purpose, Zach and his fellow Symphonic bassist, junior Josh DeFilipps, dressed in authentic Austrian boiled wool jackets and held up signs instructing the crowd on when to clap. Zach, who has had interesting roles in previous concerts such as tambourine solos and playing a triangle, described the role as, “part of my duty as a musician.” At the end of the lively tune, the audience was prompted by Zach’s extra signage for “Thunderous Applause,” and, of course, a “Standing Ovation,” to which the audience dutifully complied.