‘We Are All Kids at Heart’ in Herndon
Votes

‘We Are All Kids at Heart’ in Herndon 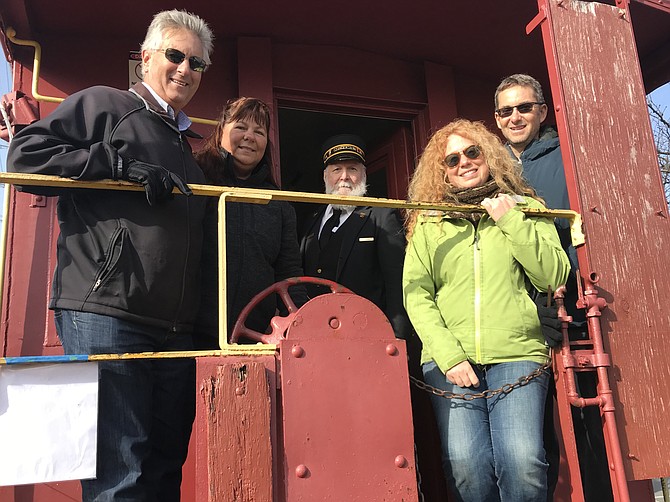 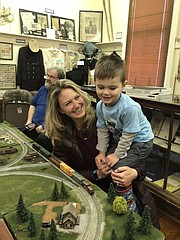 Bryan Gouldey, 2½ of Herndon, decked out in his Thomas the Tank Engine T-shirt and boots, watches N Scale Modular Railroading during the Herndon Holiday Model Train Show. Mom, Kirstyn, gives her son a leg up for a better view. 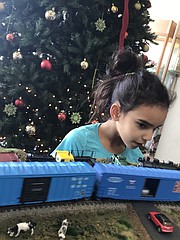 "This is extremely cool,” said Lillie Amirshahi, 7, of Reston. She and her mom, Roya, saw the Model Train Show sign posted outside the Herndon Municipal Center, so they decided to drop in. "The trains are actually moving," exclaimed Lillie. "And there are people inside."

The Herndon Historical Society presented the 13th Annual Herndon Holiday Model Train Show and Caboose/Depot Open House on Dec. 8-9. The Herndon Chamber Committee of the Dulles Regional Chamber sponsored the free event in the Herndon Municipal Center. It featured scaled-down replicas of the real thing in HO scale, the largest and the most common, and the smaller N scale. In the Old Freight Room of the Herndon Depot Museum, located a half block away, the smallest of three scales, the T-TRAK N-Scale Modular Railroading setup fit perfectly in the minimal space due to its compact size and portability.

Late Friday afternoon, J.B. Weilepp spent the day setting up an N scale layout in the lobby of the Herndon Municipal Center. Weilepp explained the difference between the two model train scales in the HMC. "N scale is one-half the size of (the larger) HO scale, and it is 1:160 ratio real-life size.” Weilepp showed the distance or gauge between the rails for N scale is only 9 mm, compared to 16.5 mm for HO modeling scale. Due to its reduced size and smaller turning radius, N scale allowed for more complex layouts than the larger O scale in limited space, Weilepp said.

ON SATURDAY, Lillie Amirshahi, 7, of Reston and her mother, Roya, stopped in the HMC. Lillie stood transfixed at the far end of the O scale layout. "Extremely cool train show," she uttered watching the cars "The trains are actually moving. I never saw that.” Bending down to peer inside one of the cars, Amirshahi exclaimed, "There are people inside."

In the Old Freight Room of the historic Depot Museum, the T-TRAK N Gauge operating layout appeared the perfect size for small space. Scott Tilton, Treasurer Herndon Historical Society, said, "We are so happy to have the Northern Virginia NTRAK set up their tiny T-track model at the Herndon Depot again this year. You know that old saying about not being able to take your eyes off a train wreck that is about to happen? Well, the setup this year has the trains crisscrossing each other. I’ve seen several tiny train wrecks already. I can’t stop watching!”

Bryan Gouldey, 2½, also couldn't stop watching. The boy appeared enthralled by the model trains and came dressed for the event. "Bryan loves all things train," said his mother Kirstyn Gouldey who held him on her knee so he could get a better view. "He has Thomas everything."

Steve Jackson, a member of Northern Virginia TRAK, operated the controls of the T-TRAK model train. Asked how long it took him to set up the track layout, Jackson said he set it up quickly, "less than an hour," adding that its modular system allows it to be easily transported and set up in limited spaces for displays.

HERNDON’S RED CABOOSE sits between the HMC and the Depot Museum. It is a symbol of the railroad that for so many years was the heart of the Herndon farming community and a means of travel to the “resort” town of Herndon according to "More Than a Local Landmark," by Carol Bruce, member of the Historical Society. Todd and Heather Parks of Herndon brought family members, Gregg and Cindy Parks of Gilbertville, Pa. to the event and specifically to the Red Caboose. They readily climbed aboard only to be surprised by the live conductor, Gary Rinker who gave them a brief history.

Asked what they thought of the Herndon Model Train Show and Caboose/Open House, Todd Parks said, "We are all kids at heart. And big kids like model trains too."