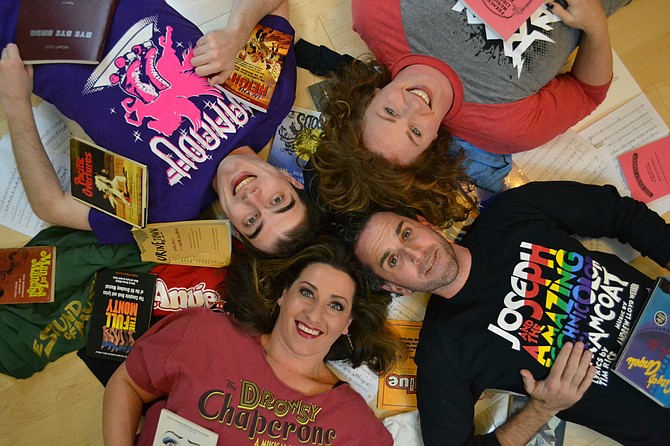 As the calendar changes to January, NextStop Theatre has an anecdote for the long, cold nights with a sharp-witted, upbeat, lively musical. It’s a musical with an unusual name, one that is even surrounded by brackets: “[title of show].”

Under the artistic leadership of Evan Hoffmann, NextStop even has a radical concept for its productions of the musical about the lives of millennial-aged friends who want to break into show business.

“At its core, ‘[title of show]’ is about artists being true to their own voices and letting no one interrupt or distort their creative expression,” said Hoffmann, Producing Artistic Director, NextStop. The production will have no single director to oversee its development.

“I am so excited that NextStop is able to give four remarkable artists and the production’s music director the opportunity to express themselves in such a clear and unfiltered way," added Hoffmann.

The musical, “[title of show]” is about four close friends, two men and two women, who consider themselves “nobodies” in the competitive New York musical theater world. Joined together, they set out to create a musical for an upcoming theater festival.

Over the course of the production, NextStop audiences will get to know the four friends as they develop more than a dozen original musical numbers disclosing their personal lives. The musical numbers include songs about insecurities called “vampires,” serious writer’s block, the sharp competitive natures of the four friends and how to create “buzz” when everyone is unknown. The reason for the unusual show title “[name of the show]” is made clear.

As a group the NextStop cast described “[title of show]” as about self-aware people with plenty of self-doubts, but bursting with personality.” Since the cast will also be taking on the responsibilities of the traditional director, the actors “can be more authentic about their characters who so love musical theater.”

As for the musical numbers, “they are like clever, witty dialogue set to music” noted music director Rosman.

Seeking a pick-me-up after the Holidays, “[title of show]” aims to be a loving homage to the musical. There is even this lyric as an enticement: “When you least expect, opportunity walks through the door, you suddenly connect.”