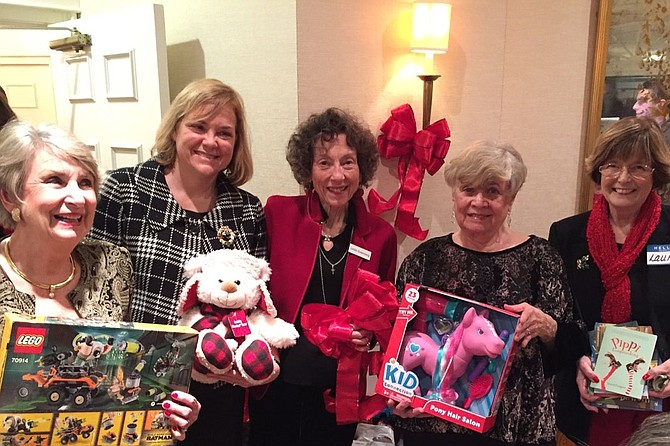 From left: Susie Miller, Susan Fitzpatrick of Community Lodgings, Linda Greenberg, Lois Lipson, and Laurie Kirby as they show a few of the gifts being contributed to the client families of the local non-profit by Commonwealth Republican Women’s Club.

Susan Fitzpatrick, development director, accepted the gifts on behalf of Community Lodgings and thanked CRWC for helping them accomplish their mission of helping families who are experiencing homelessness or instability to achieve independence and self-sufficiency. She noted that CRWC has been a big supporter of Community Lodgings for many years.

CRWC President Eileen Brackens presented a check to former First Lady of Virginia Susan Allen for the Virginia Women’s Monument Commission. The commission is raising funds to prominently place 12 life-size statues of unrecognized women as part of its Voices from the Garden project.

Eileen Brackens and others spoke of their sadness on the death of longtime CRWC officer, Loree Gunn. Gunn was active in the leadership of both CRWC and ARCC, and had been working on organizing the evening’s event. Gunn had worked in the office of Virginia’s Republican Governor George Allen in the 1990s.

CRWC is the Alexandria chapter of the NFRW. See www.alexandriacrwc.org. ARCC (www.alexgop.org ) is the local branch of the national Republican Party.