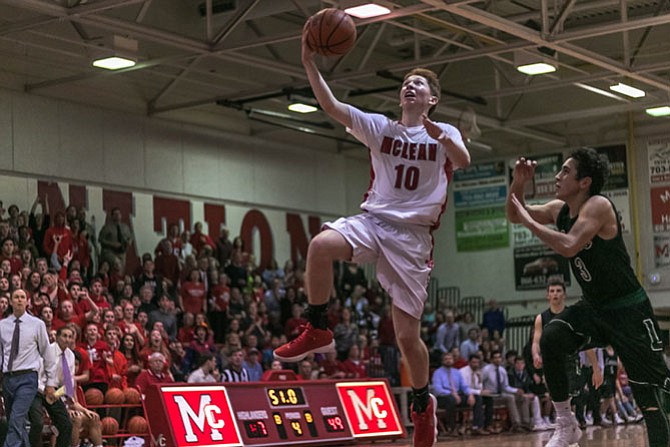 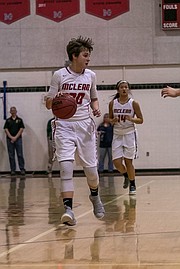 Elizabeth Dufrane from McLean put 12 points on the board for the Highlanders.

The McLean Highlanders boys’ team holding the trophy and celebrating with fans the 54-51 win over the Saxons. 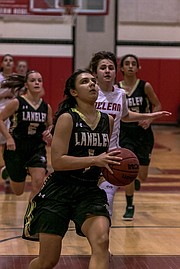 The atmosphere inside McLean High School's gymnasium Thursday night was electric for the second rivalry game of the season between Langley High School and McLean High School's boys' and girls' basketball teams. With the two rival schools separated by less than three miles, and the McLean girls and boys looking to beat Langley after losing earlier this month, both student sections were packed. The girls played first, and Langley started off strong in the first quarter leading McLean 14-7. The Highlander girls bounced back though in the second quarter, and it was a back and forth between the two teams until the end of the game. With 49.8 seconds left in the game, Langley tied the score and the girls went into overtime. Langley's defense did not allow McLean to get a single shot in and the Saxons went on to win 50-43.

With one win for the night, Langley students and fans were eager for the second game and cheering "This is our house." It looked like the Saxons would win both games, with the McLean boys trailing by 13 points at the half. The Highlanders managed to find new life though during the third quarter, and the Saxon's lead was cut down to only six points. The student sections for both schools exploded with 2:26 left in the game as McLean Forward, Brian Aka, was fouled on a lay up. Aka's lay up went in, and he proceeded to make his foul shot. The three point play tied the game 45-45. The two teams continued answering each others shots, but in the end it was fouls by Langley that gave McLean the lead. The Highlanders pulled away and won 54-51 and McLean students stormed the court. Overall it was a fantastic night of basketball with each school taking home a win.