By the Numbers in Alexandria
Votes

By the Numbers in Alexandria 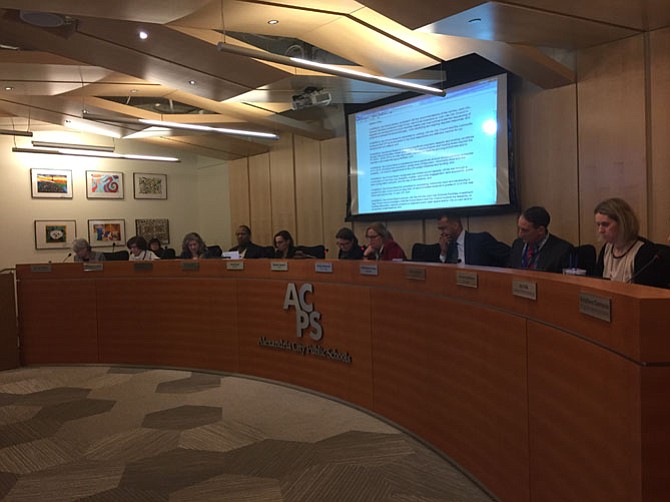 The Alexandria School Board. Photo by Vernon Miles.

Alexandria has a new superintendent, Gregory Hutchings, but with six months before he officially takes over at Alexandria City Public Schools, the School Board voted to give a raise to current interim superintendent Lois Berlin for staying on past her contract. It was part of the consent calendar at the Jan. 25 School Board meeting, but School Board member Karen Graf pulled it out for public comment to raise some concerns.

“The position of superintendent is one of the most difficult and fulfilling positions,” said Graf. “My colleagues wanted to make sure you were appreciated for wanting to stay on another six months before [Hutchings] arrives. However, this is a difficult financial climate for ACPS and the City and is why I’m fundamentally opposed to voting for this just as I would object to a board raise or a staff member raise outside of a normal budget process. I hope you understand that it is not a commentary on your service; but commitment to stewardship of taxpayer funds.“

Graf was alone on the board with her concerns, however, with School Board member Veronica Nolan speaking a moment later to use the commentary on the item to praise Berlin.

“I do have concerns with this contract,” said Nolan. “I believe it’s below market value. You’re being paid below what your predecessor and successor are.”

But Nolan also noted that it is not uncommon for interim superintendents to make more for stepping into a temporary role. Nolan laid out the challenges that superintendents deal with every day, from a macro-school management level to dealing with micro-personnel issues. Nolan suggested that institutional sexism played a role in Berlin’s salary being undervalued.

“I am embarrassed that a seasoned person such as yourself, a female, is being paid less than the male counterparts before and after,” said Nolan. “You were only asked to be here for six months, and you’re being here after. I think you’re worth this and more.”