Come Together in Alexandria
Votes

Come Together in Alexandria

Department of Community and Human Services shifts services towards the West End. 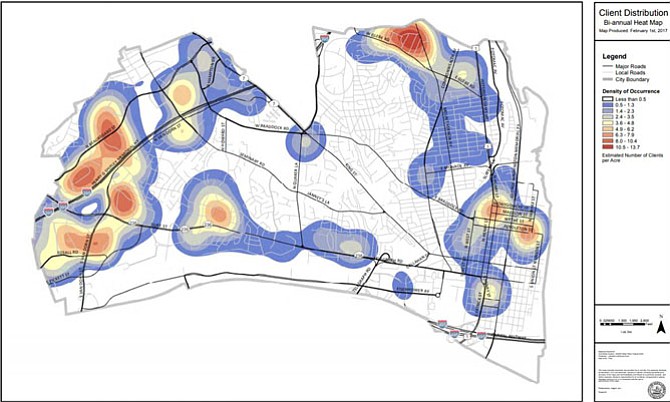 Currently, if you need to visit the Department of Community and Human Services (DCHS), you’ll need to figure out which building your particular case would be managed in. Choose carefully, because there are eight locations scattered across the city. But starting in 2019, DCHS will be consolidating into one central location. What’s more, while much of the city’s departments operate out of Old Town, one of the goals of the search for a new facility is to relocate to an area of the city with the greatest need.

According to Jennifer Cohen-Cordero, communications manager for DCHS, research by the department has shown the highest concentrations of need are located along the Eisenhower corridor and in the West End. The idea behind a consolidated building is to create a “one-stop shop” for clients. Not only will clients be able to move seamlessly between different services within the department, but staff will be able to collaborate and access partner agencies.

An FAQ about the move said the department will continue to ensure confidentiality of clients by increasing access to private service spaces in a new facility and records being secured on a “need to know basis.”

Kate Garvey, director of DCHS, said the consolidation and move for the department isn’t connected to broader discussions in city government about moving and consolidating city services. But moving city services outside of Old Town has been a recurring, and occasionally controversial, discussion in City Hall.

“My overall thought on any movement of city services is that they need to move to areas where they can reach the most amount of citizens,” said City Councilman John Chapman, one of the voices on the City Council advocating for moving city services to the West End and other locations in need. “Historically, that hasn’t really been the case. Our demographics have shifted.”

Discussion of moving services out of Old Town came up in 2015 when the city was staring down the barrel of a $53 million price tag for heating, ventilation and air conditioning overhauls to City Hall. Much of the existing air conditioning infrastructure had been in place since the 1940s. Then Mayor William Euille suggested that the city could begin looking at consolidating services at a new, more modern facility while looking into a public-private partnership to redevelop City Hall. The City Council was divided on the issue at the time, with then Vice-Mayor Allison Silberberg saying City Hall was a defining historic feature of the city and Euille’s plans would essentially sell the building.

The discussion of moving city services to the West End, or consolidating them in one building, has largely died down since then. But with leases coming up for city department buildings, Chapman says it might be time to start looking into it again.

“It’s something we need to be ready for at the end of leases,” said Chapman. “The lease for human services is up, that’s why they’re looking for it. But we need to take a look at things prior to leases being up. It would have been great for city and schools to talk about where the school’s next central office location is prior to their lease being up. There could have been more coordination on that level. I think it would be a great opportunity to have all the city services in one place, and that be a place connected to transit with the most opportunities for Alexandrians to maximize [services]. We need forward-thinking folks interested in placing stuff where it is most accessible to our current community.”

Chapman says the time to start planning for relocations is now rather than waiting for potential buildings to open up.

Chapman says there are several city departments whose clientele has moved since the ‘80s while the city services have not. While Chapman said the Health Department being consolidated in North Old Town was once sufficient for broader access, the needs moved to other parts of the city. Chapman says the same is true for departments dealing with businesses.

“For any business owner, it would be great for anything dealing with business like Planning and Zoning as well as Alexandria Economic Development Partnership and the Small Business Administration to have those all near each other. While [some of those] aren’t city departments, it’s helpful for any city-related department being included in that.”

But while DCHS is moving to the West End, Mayor Allison Silberberg noted that it’s a special circumstance and it’s not a situation necessarily applicable to other city departments like Planning and Zoning.

“As for other services, we can keep this [more in mind], but… I can’t imagine not having Planning and Zoning in City Hall,” said Silberberg. “I don’t think [the DCHS] move is necessarily a one off, but I think it’s wonderful that I can walk down the hall and speak to someone at Planning and Zoning… I don’t think it’s connected, because DCHS has never been in City Hall. It does make sense that they need to be in one spot together … I can’t think of another [city department] that’s in that discussion. I believe firmly that our seat of government must remain where it is.”

Currently, Garvey said it’s too early to estimate the costs of consolidation.