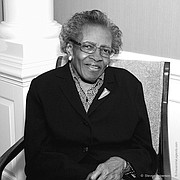 Shirley Virginia Neizer Tyler died on Wednesday, Feb. 7, 2018 at Goodwin House Alexandria. Beloved mother of Richard Tyler and Kathryn Prigmore, she is also survived by her grandchildren, Winona Tyler, Rukaiyah Tyler, Crystal Prigmore and Amber Prigmore; great-grandchild, Chloe Tyler-Carter and a host of other relatives and friends. The family will receive friends at Grace Episcopal Church, 3601 Russell Road, Alexandria, VA 22305 on Saturday, Feb. 17, 2018 from 1 p.m. until time of service at 2 p.m. The Rev. Robert Malm, Rector, is the celebrant. Arrangements are by Greene Funeral Home, Inc.

In 2014, she was named a Living Legend of Alexandria. In a March 2014 profile, Alice Morgan wrote:

“For more than 40 years, Mrs. Shirley Tyler has been a community leader in Alexandria. Tyler has been a resident of Alexandria since 1965 when she, her husband, son and daughter moved to Arlandria.They were the first African American homeowners in their neighborhood. Tyler became involved in her neighborhood association because of the problems of flooding from Four Mile Run, rat infestation and drug dealing. There were three major floods in the area, the worst in 1972 after Hurricane Agnes. As a member of the Arlandria Civic Association, Tyler worked tirelessly to bring about what became the Four Mile Run Flood Control Project by the U.S. Army Corps of Engineers. In the aftermath of the floods, the group worked to make sure the Federal Emergency Management Agency (FEMA) provided support for what, by then, had become a predominantly African American and poor neighborhood. The group’s community efforts at resolving the problems with rats led to city rules requiring trash to be placed in cans with lids. Their efforts at curtailing drug traffic were ongoing and led to the establishment of a satellite police facility in the neighborhood. Also, as part of the Arlandria Citizens Association, she fought the intentional redlining by real estate agents where absentee landlords did not keep their property in good shape or illegally subdivided houses and apartments into multiple units.

“Tyler’s collegiate education in the social services and preschool education, made it natural for her to become actively involved in the Alexandria public school system which was being forced by federal mandate to desegregate. She worked closely with Living Legends Ferdinand Day and Lynnwood Campbell and others to assure that her children and all children would receive a first class education. In 1973, Tyler was appointed to the Alexandria School Board. From 1974 to 1976, she served as vice chair and from 1980 to 1982 served as the first African American female chairperson. Tyler was instrumental in creating racial harmony during the redistricting of Alexandria City Public Schools while vestiges of racism prevailed among many. She worked without recognition or fear. Her concern for fair play and equitable treatment while remaining ethical, independent, and open minded is still the foundation of the school board’s redistricting which resulted in “All roads lead to T.C. Williams.” The end result was the alignment of the schools into the K6­2­2­2 formation and the creation of T.C. Williams into the single high school for the City. K6­2­2­2 was the terminology given to the reorganization of the schools to comply with desegregation law starting in 1971.

“Tyler was an educator. From 1969 to 1979, she was a 2nd and 3rd grade teacher at Grace Episcopal School. In 1975, she became the Headmistress and remained in that position until her retirement in 1989. Under Tyler’s leadership the school’s scholarship program provided opportunities for children from adjacent impoverished neighborhoods to attend.

“In addition to her community service in education, Tyler volunteered on Block Grant Advisory Committees from 1982 to 1990. She worked closely with Living Legend and former City Manager Vola Lawson and former City Manager Phil Sunderland on allocating limited funds to deserving not for profit organizations. This required her to have a thorough knowledge of the workings of each non­profit requesting funds as well as a thorough knowledge of their financial status. Tyler was also involved with the addition of two recreation centers at Cora Kelly School. For over 25 years, she was involved with voter registration drives for campaigns for city council, congress, senate, and presidential campaigns.”