‘The End of an Era for the City’ of Fairfax
Votes

‘The End of an Era for the City’ of Fairfax 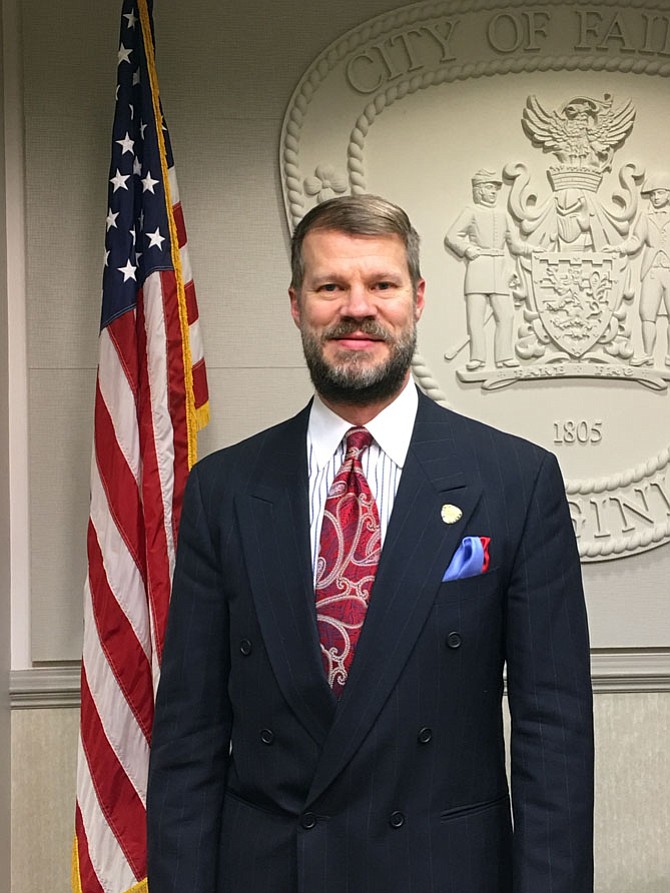 “There is no greater honor than to be elected by your friends and neighbors and represent their interests on a governing body in the place we love to call home.” — Jeff Greenfield, City Council member

In a move that took many residents by surprise, longtime City Council incumbent Jeff Greenfield announced last week that he won’t be running for reelection in May. He’s served 12, two-year terms as a Councilman, and his voice brimmed with emotion as he addressed his Council colleagues during their Feb. 13 meeting.

“This was not an easy decision for me to make, because of my love and dedication to the City of Fairfax,” he said. “It’s my home and it’s a special place.”

Noting that he grew up here, Greenfield said he’s been “blessed” to have served this City in some capacity since 1989, when he was first appointed to serve on the Parks and Recreation Advisory Board. In fact, for 24 of the 25 years he’s been married, he said, “I’ve been proud to serve as a member of your City Council.”

Greenfield also stressed that “There is no greater honor than to be elected by your friends and neighbors and represent their interests on a governing body in the place we love to call home. My wife, Lisa, my daughter, Alexandra, and my entire family have been by my side during the time I have served. I’m very fortunate to have such wonderful people supporting me and – by extension, the community – in my service to the public.

“There comes a time, though, to take a step back and, for me personally, spend more time with my family,” continued Greenfield. “I don’t regret a minute of my time on Council and am truly blessed to have a loving wife and supporting daughter behind me.”

So, he said, after participating in more than 850 official meetings of the City Council – as well as countless committee, neighborhood, regional and applicant meetings – he’s decided not to seek a 13th term on the Council. Instead, he’ll retire at the end of June. “And it’s not because it’s number 13,” he joked. “I’m not that superstitious.”

BEFORE THEN, however, Greenfield will be as busy as ever with his duties on the Council. “I look forward to continuing to serve the remainder of my term and participate in another budget discussion,” he said. “And I will continue to be active in the community, especially with Alexandra, as she goes to Lanier [Middle School] next year.”

“Thank you, Mr. Mayor, to my colleagues, our awesome City staff and the community,” said Greenfield. “It’s an awesome place to call home, and I’m not going anywhere.”

In response, Fairfax Mayor David Meyer said, “I’m having a hard time imagining City Council without you on the dais. The City of Fairfax would not be what it is today, had we not had Jeff on City Council and his family in the community. Jeff took the gift of time and gave it back to his community, and we thank you for your service.”

Greenfield posted his announcement on his Facebook page, the next day; and not surprisingly, more than 200 friends, colleagues and community members expressed their reactions to the news and wished him well.

“Jeff, I cannot thank you enough for your unwavering love and service to the City of Fairfax,” said Del. David Bulova (D-37). “I have been so honored to work with you and Lisa and to be able to call you friends.”

Todd Fisher told Greenfield, “You have served with honor and dignity. I thank you for your service.” Sharon Ricciardi and Claudia Lewis also thanked Greenfield for all he’s done for Fairfax and wished him the best in his future endeavors.

“You made the City of Fairfax a better place for all who live and work here,” said

FORMER City Councilman Dan Drummond said, “It was an honor to serve with Jeff when I was on Council. His leadership and knowledge of the issues will be missed. We are forever grateful as a community for your dedication to our small town.”

Jeanie Odenthal agreed that the people of Fairfax City will miss Greenfield’s voice on the Council. And Terry Jewell Simmons thanked him for all his years and time devoted to the City, adding, “It is never a bad decision to focus on your family.”

Susan Horne sent “Blessings to you, Jeff, as you rediscover the concept of free time on your calendar.” And extending his congratulations to Greenfield, State Sen. Chap Petersen (D-34), told him, “The end of an era for the City, but the beginning of a new era for your family.”