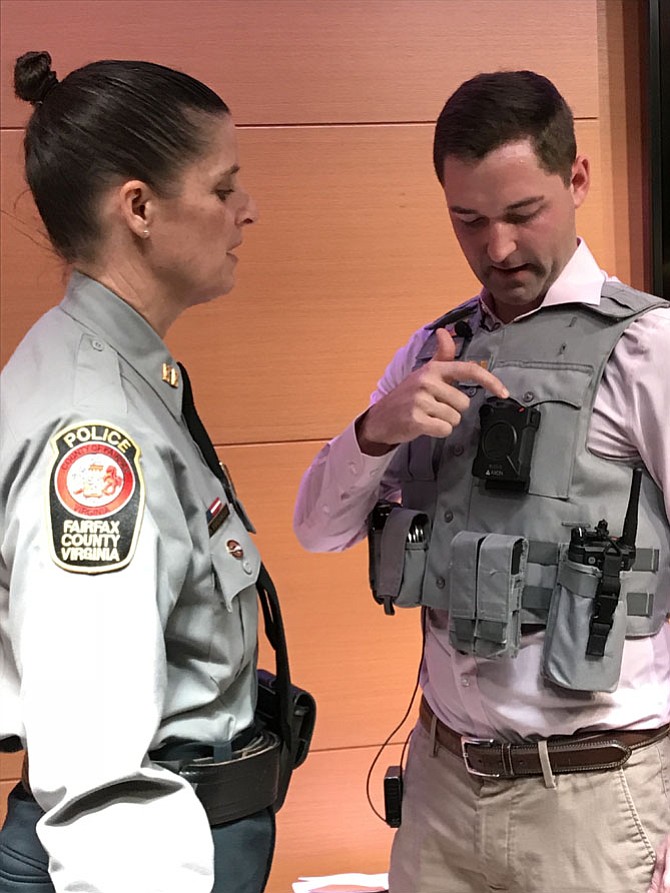 Captain Chantel Cochrane, Fairfax County Police Department, explains how the new body worn camera works as a member of the media tries one on at the Friday, Feb. 16, news conference to announce the launching of the program Monday, Feb. 19, 2019. Photo by Mercia Hobson. 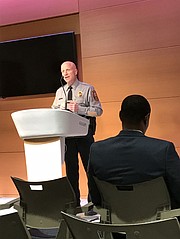 Chief Edwin C. Roessler Jr., Fairfax County Police Department announced that on Monday, Feb. 19, 2018, the department would begin training and the rollout of body worn cameras in Reston and two other communities. 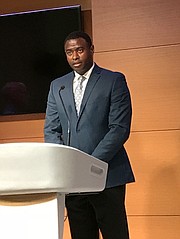 Kofi Annan, President of Fairfax NAACP, praised Fairfax County Police Department for including community stakeholders such as NAACP in the drafting of the Body Worn Camera Pilot Program. "I do think it was very important that the community was involved."

Present at the news conference was Chief of Police Edwin C. Roessler Jr. He was joined by Major Christian Quinn and Captain Chantel Cochrane as well as others, including Kofi Annan, president of Fairfax NAACP. The body worn cameras were on hand and available for demonstration.

ROESSLER explained the Body Worn Camera Pilot Program is a model program based on nationwide best practices and input from a committee of community stakeholders and organizations. Roessler explained the program is designed to understand the scope of the project’s cost, how the policy would best work, staff needed to run a full-time program, and to study whether or not body worn cameras have a reduction in complaints against officers and a reduction in the use of force deployment in the community.

One of the major questions Roessler clarified is when to turn the cameras on and off to protect privacy rights of the community while at the same time not compromising the task or safety of the officers.

During the news conference, Roessler said the department engaged multiple community stakeholders in the development of the program, as well as mental health advocates, and other community agencies that serve individuals in crisis.

According to Roessler, American University will gather and study data from the cameras to see if their use makes a difference in the community and for the police officers. The analysis will cover data and community feedback over the length of the program and will assess the impacts before, during, and after the pilot program window.

During the news conference, Roessler pointed out that School Resource Officers would not be part of the pilot project. He emphasized if an officer who is part of the project is called for service in a school and the officer comes in as a backup officer or if the officer works off-duty at a school function, such as a sports event, the camera will be worn.

During the presentation and question and answer period, topics centered on the body cameras, Freedom of Information Act (FOIA), when videos would be released and deleted, and staffing changes.

Annan said, “The policy has gone from being really a policy written ‘for cops by cops’ to one that includes concerns from the community .... I do think it was very important that the community was involved and especially from the minority community which has traditionally ... had a lot of concerns with the regards of trust …. This is a great opportunity to shore up that trust by helping to bolster the transparency portion that factors into the police trust."

COCHRANE explained, if it is a service call, meaning there is no crime in process, like a domestic dispute, and the officers are let into the house on a consent basis, if the officer is asked to turn off the recording, the officer will stop recording. Notwithstanding, if anytime later while at the scene, there is a sign of something criminal, violent, or there is going to be a use of force, the officers will start recording once again. She noted there is the 30-second buffer built into the camera.

Roessler added: "There are many nuances and this (pilot program) will provide us the opportunity to work with the community, so we all understand on/off, delete/not delete."

Quinn said, "We are bringing in some limited term employees both on the IT side and the Information Technology Bureau. So, we are going to have 24/7 technical support for the program throughout its duration. We're also bringing in some folks that are going to be assigned to the Media Relations Bureau, that's where we currently process FOIA requests, Freedom of Information Act as well as visual video evidence for the Commonwealth attorney and also internal law enforcement requests."

Quinn added that by the evening of March 1 Fairfax County Police Department should have 200 cameras on the street and have all their workforce trained by March 13.