The Long View in Alexandria
Votes

The Long View in Alexandria 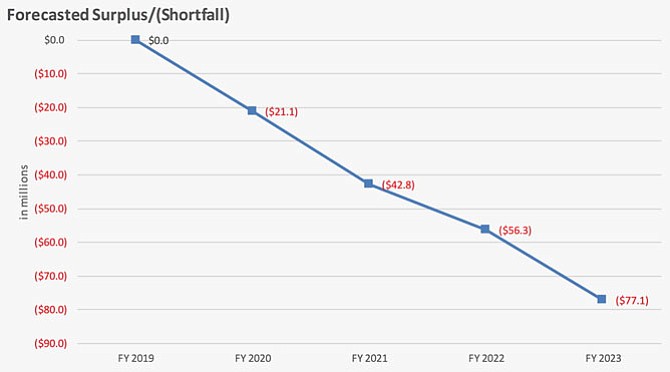 “Last year at this time, I wrote to you that the city was at a crossroads in the face of flat revenues and unexpected new costs,” said Jinks in his opening remarks. “The regional economy has been stable but growing slowly. And that means our revenues have been growing very slowly as well.”

By law, the city must adopt a balanced budget, so the FY19 proposal includes no deficit of expenditures over revenues. However, given current data and assumptions, the city’s 5-year financial planning model, projects that shortfalls will open in subsequent years, increasing by $19 million per year on average to $77 million in FY23.

The city projects $742 million in General Fund revenues in FY19, with the lion’s share (60 percent) coming from residential and commercial real property taxes. These revenues reflect a $14 million (2 percent) increase over the approved FY18 budget.

Of that increase, 69 percent will go to Alexandria City Public Schools (ACPS), 22 percent to transit services, 7 percent to city government operation and 2 percent to cash capital and debt service.

An increase in real property assessments accounts for $11 million (78 percent) of revenue growth, said Morgan Routt, the city’s budget director, at council’s work session on revenues, also held Tuesday. In 2018, residential assessments increased by about 3 percent, the second lowest increasing in the last 8 years, said Jinks. Commercial assessments increased by about one percent. Commercial multi-family housing saw the largest increase (8 percent), while commercial office space saw the largest decrease (4 percent). Overall, the average residential assessment increased by about $18,000, from $530,000 to $548,000. Household tax bills will increase by $112 per year for condos, $279 per year for single-family homes and $199 per year on average.

Except for a $25 per household increase of the sanitary sewer fee, no other significant tax or fee increases are proposed.

Councilman Paul Smedberg suggested that the city consider raising parking fees for third and subsequent vehicles. Routt said that no increase over the current tiered structure was considered for the present proposal. Currently “the residential parking permit is $30 for the first vehicle, $40 for the second vehicle, and $100 for each additional vehicle,” according to the city’s web site.

Last year, council outsourced the collection of over $5 million in delinquent car taxes to Nationwide Credit Corporation, a third party agency. City staff reported that this program has been successful so far, collections are expected to increase, and in future the program could expand to include delinquent taxes other than car taxes.

Residents can access all budget materials at www.alexandriava.gov/budget. Another budget work session, which will be a joint session between council and the School Board, will occur at 7 p.m. on Monday, Feb. 26, at the ACPS boardroom at 1340 Braddock Road.