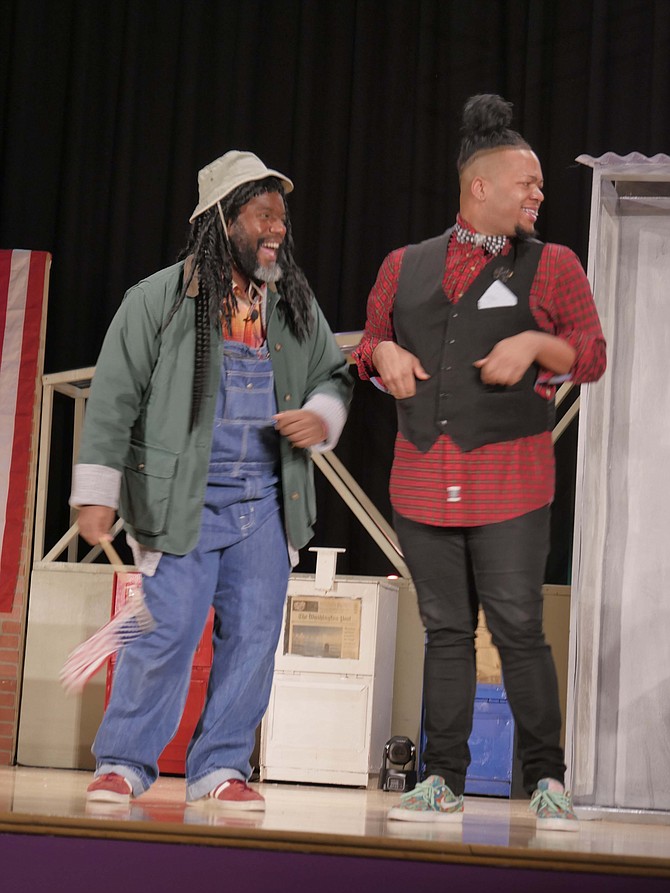 Booker T, a former prisoner, living on the streets of D.C. Photo by Shirley Ruhe. 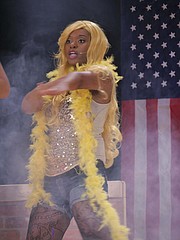 Bianca Moore in her role as a hooker.

Wigs clutter the back room at Richard Kauffman Auditorium in the Lee Center. A large tray of salad sits on a side table, costumes litter the floor. A radio plays in the background and Robert Hamilton playing Richard, a returned veteran in "U-Street, the musical," is singing "what a difference a day makes." Sheron Nelson is putting highlighter around her eyes "so people in the auditorium can see our features." She smooths True-Match on her face. "It keeps down the sweat. Sometimes I put it on between scenes." Then Pro-touch which sets the make up. Finally she sprays on a "nice little mist. It is refreshing. It makes me feel awesome."

Nelson is in charge of all the wigs and already has on the long dark wig tinged with pink that she wears for the first character she plays. "I also sing in the show and I have to climb ladders. I meant to tell Jason to get me a stunt double." Jason Ellis is the writer and director of "U-Street," focused on five homeless individuals living on the streets in D.C. and trying to figure out life. Nelson will wear a second wig, pInker and curlier, for her second role as Esther, a "goofy, quirky and a bit motherly figure who gives out food baskets to the homeless."

Beside Nelson, Bianca Moore is peering into a mirror giving her eyes a deep, sultry look with glitter for extra oomph. She smooths a red base on her lips with a shimmer on top. More glitter. She explains that after the first scene where everyone wears a red, white and blue T-shirt she will have about 60 seconds to exchange her T-shirt for a gold sequined top. It gets matched with a gold feather boa — "lots of gold" — and tall leopard skin shoes to top it off. "I play a hooker that finds her way back to what she should be doing."

Moore says, "The wig makes me feel different; it's not a look I'm used to." Nelson injects, "Let's name your wig. Every wig should have a name." Moore comments, “It’s easy to get into a role when you have a wig." Nelson asks, "Are you ready," and flips the long gold tresses over Moore's dark hair and then combs out the snarls. Then she pins the bangs back "because Bianca has to sing."

Meanwhile, in the corner, Kenneth Waters Jr. flips on his long dreads and steps into his overalls. He is playing Booker T, a former prisoner released to the streets. Waters has threaded gray color through his small goatee. Booker T will later angrily tell TJ, whose LGBT lifestyle led to his homelessness, that "prison is a business and if by chance you get out you are so messed up, you go back in."

“U-Street” covers a week in the lives of the homeless. Ellis explains it underscores the reality that given the right conditions anyone can rise or fall and beckons the audience to undergo some introspection before rendering judgment. Ellis produces his theatre under Momentum Collective, which he incorporated with a mission to educate, enrich and empower the lives of low-income youth. His productions always focus on social commentary and seek to look deeper into issues, which are of particular interest to those served through the organization.

The 3 p.m. matinee is about to begin. Voices work their way up the aisles from the back of the auditorium and soon the stage is covered with swirls of stars and stripes. Arms go up in synchronized fashion while feet jump in the air. Dancers celebrate the Fourth of July in red, white and blue to "Let's Live It Up." Nelson climbs the ladder and belts out her joyful tune. She says, "The opening scene is just a happy time." But then the plot unfolds — "U-Street the Musical — the struggle is real."

"U-Street" is playing in the Lee Center’s Robert Kauffman Auditorium at 1108 Jefferson St. on Thursday-Saturday evenings at 7 p.m. with Saturday matinees at 3 p.m. now through March 3.

People at Work is a weekly column focusing on people in the community doing their jobs. Suggestions may be sent to slrbc@aol.com.