Increased availability behind bars, but no tax breaks during back-to-school week. 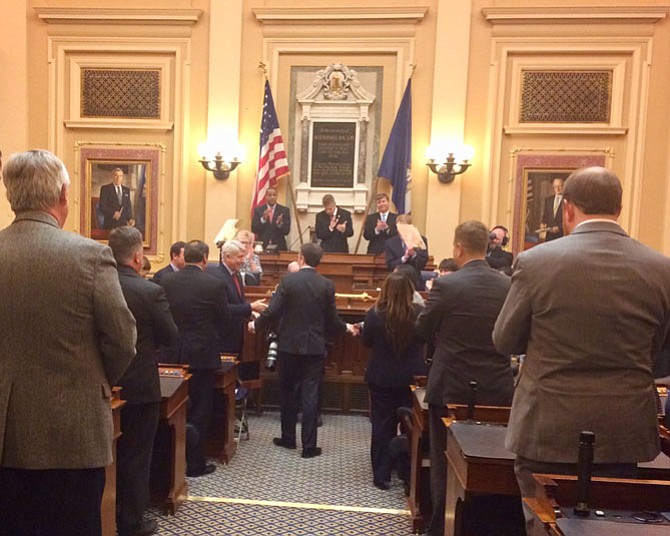 Lawmakers in Richmond approve access on demand to feminine hygiene products in jails and prisons but deny adding pads and tampons to the back-to-school tax holiday.

Several lawmakers from Northern Virginia arrived in Richmond this year hoping to push a cause known as menstrual equity — making sure that feminine hygiene products are affordable, safe and available. But success has been mixed. Lawmakers are moving forward with making sure that tampons and pads are available on demand to inmates in Virginia jails and prisons. But they are not willing to move forward with eliminating the sales tax on feminine hygiene products, even if that’s limited to the school tax holiday.

“Currently under the tax holiday you can buy things like garter belts and wedding dresses,” said Del. Jennifer Boysko (D-86). "But menstrual supplies are not included in that tax holiday, and girls have to have those products to go to school.”

When asked whether feminine hygiene products are available at jails across Virginia, sheriffs across Northern Virginia say they are provided on demand. But talk to inmates, and you hear a different story. In Virginia prisons, pads are provided at no charge but tampons are available for sale at commissaries. But after Del. Kaye Kory (D-38) introduced a bill to force the issue, “The regional jails and the Department of Corrections have now announced that they are going to provide feminine hygiene menstrual products to women who are incarcerated at no cost,” said Kory, whose bill is on the way to the governor’s desk. “Public shaming works sometimes. I’ll have to do it more often.”

ADVOCATES SAY SHAME has been a problem for too many women for too long. The idea that Viagra and Rogaine are tax free in Virginia but pads and tampons are not has been a sticking point among many for years. They praise lawmakers for taking action in jails and prisons but are concerned that Virginia will continue to tax these products even during the sales tax holiday.

"Incarcerated women don’t necessarily get that much empathy, so we thought this was something we were really going to have to fight for,” said Holly Seibold, founder of an organization known as Bringing Resources to Aid Women’s Shelters. “In terms of the sales tax, I think this is politics at its worst."

Virginia is not one of the seven states that exempt sales tax for feminine hygiene products, although states across the country are moving in that direction. Illinois is the latest state to create one, and Connecticut’s new sales tax exemption will begin this summer. The Virginia Department of Taxation estimates that eliminating the sales tax on pads and tampons would cost about $5 million a year.

“I believe that there is a will in the governor’s office to make up for the revenue loss from the sales tax,” said freshman Del. Debra Rodman (D-73), who also introduced a bill to eliminate sales tax on these products. “Even if it didn’t go anywhere this year, everything doesn’t always happen at once. But making laws is a process, and we need to show there’s bipartisan support for this.”

ELIMINATING THE SALES tax is one thing. But adding feminine hygiene products to the list of items exempt from the back-to-school sales tax holiday is a different story. Advocates were hopeful that they could at least add pads and tampons to a list that includes bowling shoes and fur coats. The Department of Taxation estimates that would cost about $40,000 a year, a price Republicans in the House Finance Committee weren’t willing to pay.

“Unfortunately it never received a hearing at all,” said Boysko, whose bill was rejected without a recorded vote. “I’m disappointed but I’ll try again next year. I think the focus on Medicaid expansion has been the top priority, and that’s huge so I’m glad we are looking at that.”