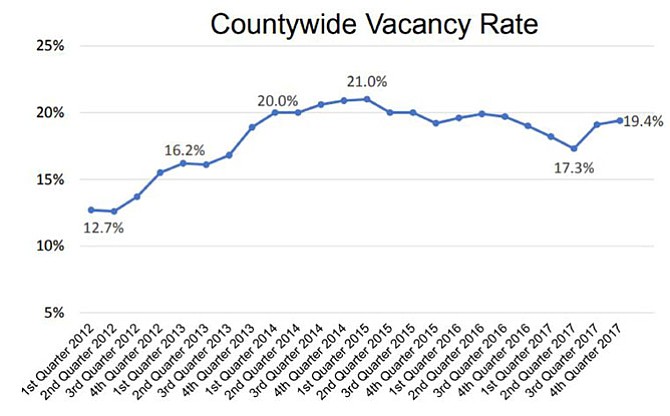 Impact of the budget on the average citizen.

On the surface, there are few surprises in this year’s County Budget. The $1.27 billion budget is a 1.7 percent increase over last year’s budget without much by way of flashy new big items and no tax rate increase. But behind the scenes, city facilities will be suffering the brunt of cuts brought about by a revival of the commercial office vacancy spectre that’s haunted Arlington’s economic development.

The countywide office vacancy rate rose from 17.6 to 19.4, a reversal of the slow downward trend for office vacancy in Arlington over the past several years. County Manager Mark Schwartz says at least some of this is attributable to this year taking the hit of the Patent and Trademark Office’s relocation to Alexandria.

Still, despite the dire economic news, Schwartz did not recommend a tax rate increase. The County Board voted at its Feb. 24 to maintain the existing tax rate to avoid furthering the gap between Arlington’s reliance on its residential tax base over its commercial one. At the current tax rate, the average property tax bill will increase by $297.

As part of $8.4 million in budget reductions, 48 positions in Arlington County will be cut. Of these, 19 positions are currently vacant, but 29 positions are occupied and will involve laying off staff. The department to take the largest hits is the Department of Human Services, where 14 positions are being eliminated. Six of these are from employment services, a department Schwartz says has maintained the same size for years but visits have declined 40 percent over recent years.

Schwartz says Arlington’s main struggle for recruitment is the lack of affordable housing; firefighters in Arlington generally have to drive to work from places like Loudoun, which are beginning to offer more competitive salaries. For police, Schwartz says the nearby federal law enforcement agencies are a big poacher of local talent.

“We’re under a lot of pressure to pay for firefighters,” said Schwartz. “It's harder to recruit new firefighters and police officers.”

The final budget will be approved by the County Board on April 21.