Talent on Display at Saxon Stage in McLean
Votes

Talent on Display at Saxon Stage in McLean 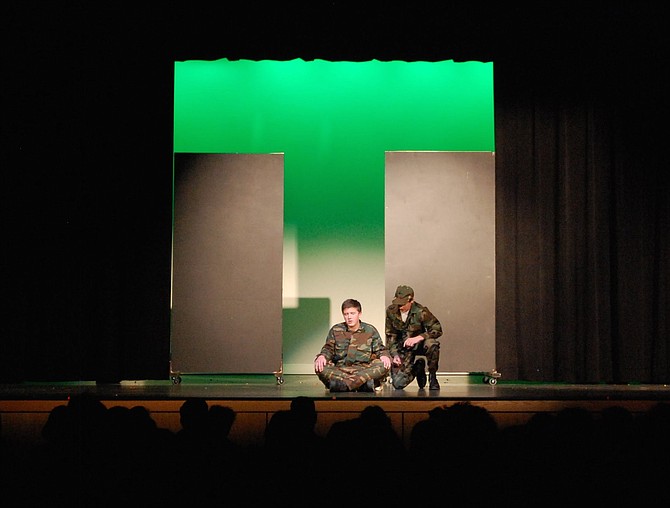 The character called “The Soldier,” played by Aidan Herzig, converses with Major Harris (Michael Hoeymans) as the Major finds his man stuck in one place when he mistakenly sat on a landmine. Photo by Shanzeh Umerani/The Connection

Actress Danielle Generous plays a paranoid and cautious Mary Girard who is surrounded by five “furies” (Evelyn Marzol, Jessica Peros, Mary Peterson, Rachel Lesan and Samuel Buroker) that are fueling the idea of her mental insanity. This one-act will be recorded and submitted to VHSL (Virginia High School League) in hopes that the Saxon Stage will win State Championships.

The Three Bears (from left: Manasi Uprety, Ben Hauptlil, and Ana Grajdeanu) stand as they present their side of the story that Papa Bear (Hauptlil) is explaining to the court and Judge Wallabee (Brooke Siegel).

She (Jane Gerrard) is peacefully feeding her pigeons on a park bench. The Loveliest Afternoon of the Year cast only has two members, She (Gerrard) and He (Ryan Wilson, not pictured).

From tales of insanity to those of love, the drama students at Langley High School put their skills to use by directing and putting on their own shows on Friday, Jan. 19. A total of four “one-acts” flowed through the night as the Saxon Stage’s students directed and performed their sets without the help of an adult supervisor or teacher.

Theatre director of the Saxon Stage Valerie Karasek wanted to give this platform a go for her students so that they may be able to experience the responsibility as well as the excitement of all aspects of theatre from costumes to stage management. “[This] was a bit of an experiment,” said Karasek as she watched her students perform their given acts. “We usually do a winter selection of student chosen one-acts, [however] this year we didn’t have as many student directors who had the time to put it on — so we did something a little different,” Karasek explained. The plays consisted of a comedy called “Goldilocks on Trial,” a drama named “Booby Trap,” a love story titled “The Loveliest Afternoon of the Year,” and a thriller captioned “The Insanity of Mary Girard.”

Anneka Noe is an advanced drama student at the Saxon Stage and was the director for the VHSL chosen piece, “The Insanity of Mary Girard.” The act takes place in the year 1790, where Mary Girard has been seemingly imprisoned in an insane asylum due to her husband declaring her insane after figuring out she will have a child of another man. Mary Girard is wary and paranoid of her surroundings due to five “furies” that are fueling the idea of insanity around her, of which Mary eventually gives in to believing. The story is compelling and haunting as you begin to see the small transformations in the character; actress Danielle Generous surprises the audience with a powerful performance acting as the sane turned insane character alongside her castmates Will Baruch (The Warder), Claire Goldhush (Mrs. Lum), Mark Bosset (Stephen Girard), Adam Taffel (Mr. Phillips), Sofia Duque (Polly Kenton), and The Furies (Evelyn Marzol, Jessica Peros, Mary Peterson, Rachel Lesan and Samuel Buroker).

Drama one students, most of whom are freshman, were part of the first two acts — “Goldilocks on Trial” and “Booby Trap.”

“You get a lot of freedom [doing this],” said Devran Johnson, a freshman at Langley High School and member of the Saxon Stage. Johnson plays the role of Caitlyn in the one-act titled “Booby Trap.” The act revolves around a character called “The Soldier,” played by Aidan Herzig, who finds himself stuck in one place when he mistakenly sat on a landmine. The Soldier evidently knows what is going to happen and starts looking back at his past and wonders how his wife and son back home will take the painful news. “Booby Trap” is a captivating and heart-breaking one act that was beautifully performed by Herzig, Johnson, Michael Hoeymans (Major Harris), Cole Sitilides (Captain Gruss), Cathy (Kaylie Gibbs), Tom (Kathryn Skeen), The Lieutenant (Luke Flaxman), Drill Instructor (Anderson Hauptli), Caitlyn's Mother (Jenna Khatib), The Corporal (John Colligan), The Professor (Sam Chagoury), Sister Anne (Abby Dickerson), Abby (Julia Sensiba), Molly (Mariana Pava), Mark (Lawson Haynes), Stephanie (Kimmy Tallant), and the Soldier’s Mother (Lily Calderwood).

This series of one-acts allows the students in the Saxon Stage to be themselves and do what they love most. “It’s the most amazing feeling [being on stage]; you get to build a[n] ensemble family and are able to perform and work together,” said Johnson after her performance in “Booby Trap.” The members of the Saxon Stage will be putting on their Spring play of Agatha Christie’s “And Then There Were None,” and tickets are available at www.saxon-stage.com. 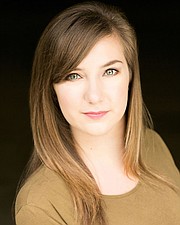 This article originally omitted to mention that “The Insanity of Mary Girard,” Langley High School’s entry into the VHSL one-act festival, was directed by Langley senior Elenitsa Sgouros. Anneka Noe was the stage manager for that play. All of the one-acts rehearsed primarily in class, until after school rehearsals were added as performance time approached. At each rehearsal, a teacher/director was available to help guide students in their efforts. Students were encouraged to make creative decisions and to guide their one-acts from first reading to full production, but always under the guidance of an adult. The Langley High School main stage production scheduled for the spring is “Evita.”