Counting the Homeless in Arlington
Votes

Counting the Homeless in Arlington 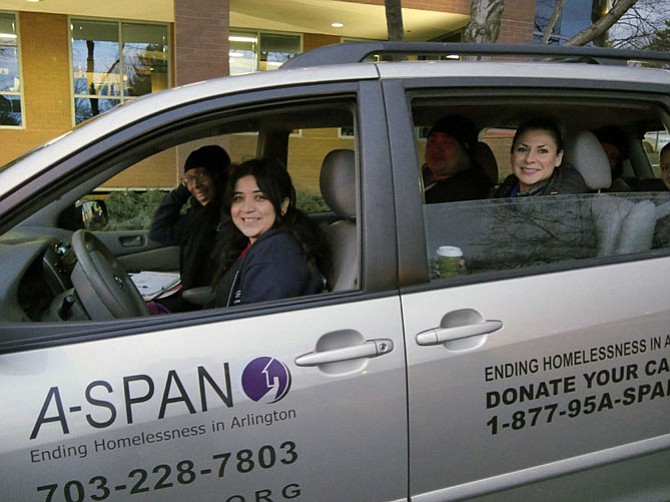 Team 4 takes off for its first stop at the Shirlington Library where homeless gather inside to keep warm. Photo by Shirley Ruhe. 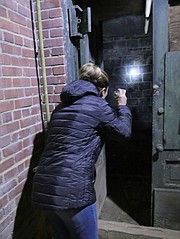 America Caro waves her flashlight into an open door frame in an abandoned structure to check for homeless during the Arlington Point in Time (PIT) homeless count. 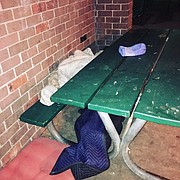 A homeless man sleeps wedged against a wall under a picnic table at Jennie Dean Park. 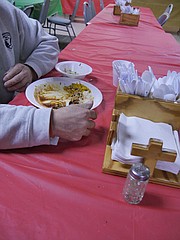 The Assembly of God church on Route 50 offers free dinner five nights a week to the community, both homeless and housed.

Team 4 pulls on warm hats and gloves and heads out the door of the Arlington County Department of Human Services (ACDHS) and climbs into the A-SPAN van. Maria Granados and Bianca Twyman, both A-SPAN case managers, will take turns driving tonight. They are part of the 5:30 p.m.-10 p.m. shift for the Point in Time (PIT) count of Arlington homeless taking place Jan. 24. They are bundled up as the temperatures are expected to plunge during the night.

Forty-eight county staff, non-profit employees and volunteers have signed up to conduct the PIT survey on trails and parks, under bridges, in parking garages, at Metro stops, in alleys and outside some business establishments. The fifth and sixth teams will cover the second shift from 10 p.m.-2 a.m.

It is the first time for the Arlington PIT count for the Rev. Laura Martin from Rock Spring United Church of Christ but, "I have done it at least a dozen times in the past when I worked at the shelter in Falls Church and other places." She says, "It's so important for us to know our neighbors who many of us don't encounter in our everyday lives."

Massen Ma, a diversion specialist for A-SPAN, says this is also his first time here but he participated in the PIT count in Prince William County several times in the past. "It was different there because we went out early in the morning when people were still sleeping on the street."

The team 4 van pulls up at the curb in front of the library at Shirlington. Bianca Twyman explains, "The homeless like to go inside to stay warm. We look for large bags, people who look a little unclean." A quick look around doesn't yield any potential homeless to interview. "They must have left to eat. It's about that time."

The next stop is the Assembly of God Church on Route 50. It is near the end of the 5 p.m.-6:30 p.m. free dinner offered five times a week at the church. Few are left in the dining room eating the chili and spicy rice that was cooked for tonight's dinner.

Maria Granados says, "We know a lot of the people who eat here, and most of them have a home. They eat here to get a free meal and because they know each other and like to be together."

It is getting colder, and a few flurries drift through the air as the van heads to the alleys on Pershing Street. America Caro jumps out of the van, and the group splits up to take both sides of the street. Caro heads for the alley in back of the Glebe Market. Granados points to the other side of the street, "Usually there is someone sleeping over there. It may be a little early for him to be sleeping and it's so cold tonight that a lot of people will have decided to go to the shelter."

Caro detours into an abandoned building wedged behind a wall and waves her flashlight through the open door frame. "This is a perfect place to stay because it is protected from the wind." No one inside, "but you can tell someone stays here because there is a bike parked against the wall."

She heads around the corner and points her flashlight under the tall dumpster. "We look for large bundles of belongings that they like to hide away." Caro says,"I have a couple of clients who sleep in dumpsters for a few hours and then move somewhere else." Caro is a clinician for the Department of Human Services and does street outreach.

The time for each survey can vary. Ma says, "It can be difficult to get some people to talk and others want to tell you their life story. Of course," he adds, "the $10 gift cards from McDonalds or Subway for participation can be a good incentive." The survey includes questions about household size, veterans status and homeless status as well as age, gender, ethnicity and race. It lists health conditions and asks about domestic abuse. The final questions ask about employment, income and need for housing.

Kurt Larrick, assistant director of communications and public engagement for the ACDHS, says while they have numbers on those served in shelters and through other programs and these are better for planning and budgeting purposes, the PIT Count is a useful supplement. Larrick says it is also one of the metrics that is important to the U.S. Department of Housing and Urban Development, and the PIT is conducted nationwide during January each year.

Team 4 makes its final stop at Jennie Dean Park. One homeless man waves them off but another agrees to an interview in Spanish. According to one of the team, the homeless man was seeing someone from the county for mental health issues.