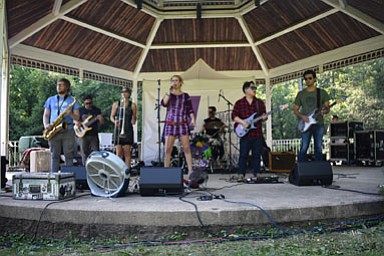 McLean — Boyfriend and girlfriend Mike Morosky and Terry Halter joined upwards of 40 others at the McLean Central Park Gazebo to see Black Masala on Sunday in the first of this year’s Summer Sunday Concerts in the Park.

“It’s free, so I don’t have to spend money on her,” Morosky said, and Halter laughed. Seriously, he added, “How often do you get to go to outdoor concerts unless they’re big productions?”

In contrast to such productions, these Sunday concerts are small-scale and intimate. Audience members sat in folding chairs or on blankets, and some even chatted with the band members during intermission.

Black Masala brought lots of energy to the stage. Vocalist and percussionist Kristen Long danced as the group played a wide range of music with multicultural influences.

“You can’t put us into just one category,” Long said. “I guess we can identify ourselves as gypsy, funk, brass, New Orleans, horn-driven dance music.”

Black Masala’s two-hour concert had people on their feet and dancing despite the 90-degree heat.

This was the first of seven weekly concerts this July and August, presented by The Alden at the McLean Community Center in cooperation with Dranesville District Supervisor John Foust.

Black Masala will perform again this Friday at Jazz in the Garden at the National Gallery of Art, and the a cappella group Backtrack will perform at this week’s Sunday concert in McLean.

Sundays at 5 p.m. in the McLean Central Park Gazebo