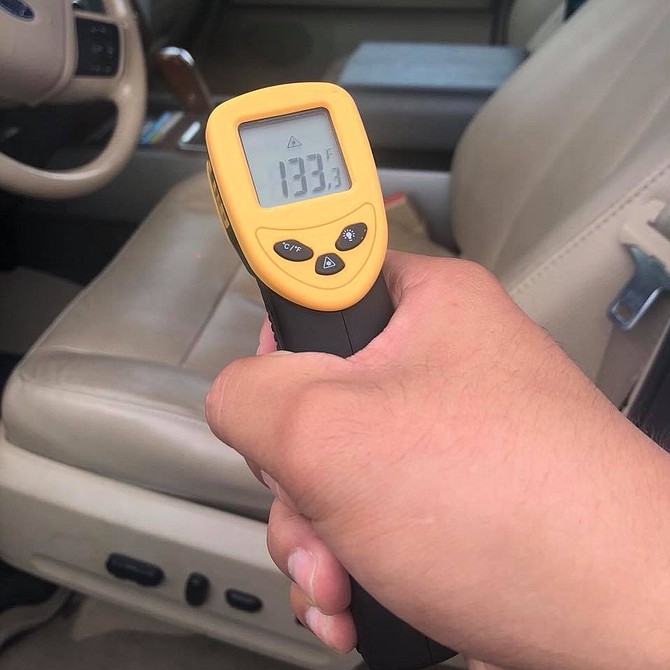 Temperature inside a car during the heatwave. Photo contributed 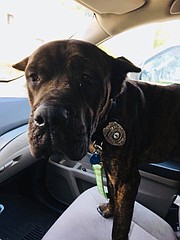 Deputy Lando (up for adoption soon) is supervised in an air conditioned car. 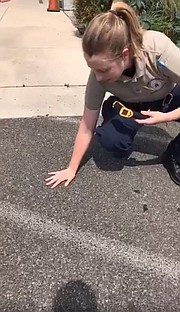 On July 3, temperatures hit a high of 97 with a heat index of 107. For humans, and for their animal companions, a heat wave can pose dire health risks.

William Flagler Jr., deputy director of Department of Public Safety Communications and Emergency Management, said the county works during heat waves to get warnings out to citizens.

“There’s a lot of dangers,” said Flagler. “There’s heat stroke, obviously. Children and pets [are particularly vulnerable]. It’s the summer, so kids hanging outside might not know how much water or fluids they should be drinking. People might not be aware of how dangerous the heat can be.”

Flagler said a heat wave is a great time to check out programming at the local library, which not only has summer activities, but is also all air conditioned.

For those who have to be outside, Flagler said many Arlington parks have spray grounds for younger people to cool off.

It’s impossible to tell how many 911 calls come in for heat-related issues; Flagler said a person with heat stroke is usually called in as a person fainting.

The heat wave also has an impact on Arlington’s four-legged residents.

There’s two categories of animals impacted by the heat wave, owned animals and wildlife. For pets, one of the biggest problems has been animals left in vehicles.

“It gets very hot very quickly,” said Jennifer Toussaint, Arlington’s Animal Control chief. “It’s widely understood that it’s not a good idea to leave your pet in a car, but we’re still pulling animals from vehicles all week long.”

Toussaint said there’s an average of one or two calls for an animal in a car per day, with a total of seven to 10 animals rescued from cars in the last week. For one dog, who showed other signs of neglect, animal control took custody of the dog.

“It’s discouraging to think that people still brought their pets out,” said Toussaint.

Toussaint said many of the calls for animals in cars were discovered to be people visiting Arlington from out of town over the Fourth of July holidays.

There was one dog owner Toussaint encountered over the last week who came running out to her car when animal control showed up to break her car windows, which by law emergency responders answering a call for an animal in peril are allowed to do. The flustered pet owner told Toussaint that she thought her dog was fine because several hours ago it had been in the shade. Even discounting the fact that the sun changes position during the day, Toussaint said, during extreme heat, shade offers very little protection for animals.

Even for well-meaning pet owners who know not to leave their pets in cars, there are still several things people do that Toussaint said can be bad for their pets. One of the frequent calls Toussaint says comes in during heat waves is calls for animals with burned feet.

“People get home at at 4:30 and take their dog out for a walk, but those black tops have been heating all day,” said Toussaint. “The dog’s foot pads are burned. Even a few seconds can burn their feet.”

Well-meaning Arlingtonians also leave out water bowls for animals to get hydration during the hot temperatures. But Toussaint said pet owners should make sure to dump the water every time the dog comes inside. Left outside, the bowl can quickly heat up, so that when the dog returns a few hours later it could accidentally be drinking 90 degree water.

Heat waves also take a toll on Arlington’s wildlife. Toussaint said the heat wave hit at a particularly bad time, with many babies born in the spring just now emerging from their nests or dens.

“They’re branching out when the heat is the worst,” said Toussaint. “We’ve had an uptick in addled animal calls. What we see is lethargy, like animals on back decks, under porches, or trying to get near AC units. Fledgling birds don’t do well either. They spend days on the ground until they’re able to fly and hydration is an issue for them.”