Grant funds “Breakfast After the Bell.” 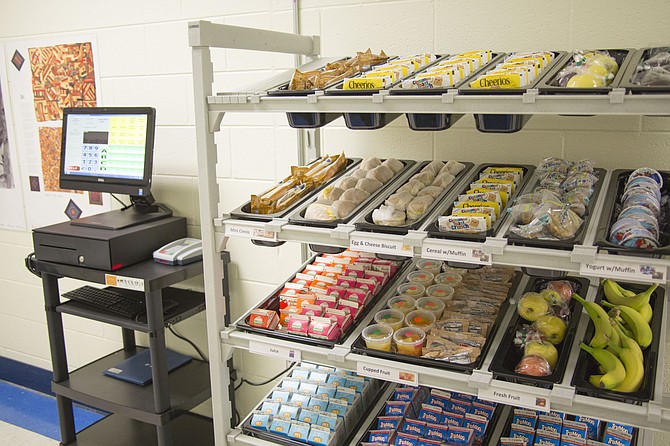 Model of a Grab and Go breakfast kiosk. Photo contributed

Hungry but no time for breakfast? T.C. Williams High just received a grant from No Kid Hungry Virginia to jumpstart a new program called Breakfast After the Bell. This program brings breakfast out of the cafeteria into the classroom at middle and high schools across the state.

Sarah Steely, no Kid Hungry Virginia program manager, says there are a lot of reasons why it isn't convenient for students to eat breakfast in the cafeteria. "There are scheduling issues with carpools or buses, and they can be very busy with dance groups, computer clubs and other activities that meet before school."

She adds there is also the issue of stigmatization since high school students are even more aware than younger ones of social differences, and they know that the students who go to the cafeteria for a free breakfast are economically disadvantaged. The new kiosks level the playing field. Sixty percent of the students at T.C. Williams are eligible for free or reduced price lunches.

T.C. Williams received a $4,269 grant from No Kid Hungry Virginia to fund Grab and Go kiosks that will be situated in high traffic areas around the school. A student can stop by and pick up the USDA-certified breakfast with a required low-or no-fat milk, a grain product and a fruit. They can carry it to the classroom, their tutoring session or wherever they are headed first thing in the morning. Steely says even if it is a Danish, it won't be the same bakery item. It will have less salt, contain whole grains and be more nutritious. The specific kiosk configuration for TC is currently being designed.

Steely says this program has been going for many years now but really got its push in Virginia under the McDonnell Administration in 2011 and then by the next governor's wife, Dorothy McAuliffe. Over 1,000 schools in Virginia have Breakfast After the Bell programs. "We were so happy to see TC apply for this grant because they are choosing to do this to increase breakfast participation."

No Kid Hungry Virginia points out research shows that hunger has long-term ramifications on children including lower test scores, weaker attendance rates and a high risk of hospitalization and chronic diseases.

Steely says that several elementary schools in Alexandria including Cora Kelly Elementary, William Ramsay Elementary and Patrick Henry Elementary have recently started similar universal breakfast programs called Breakfast in the Classroom. It also was instituted at Hammond Middle School in the spring of 2016. These programs have a slightly different model of delivering breakfast to the classroom rather than the high school model of Grab and Go kiosks but they have the same goal of increasing breakfast participation. Advocates point out it is a great community builder where all students can eat together with their friends instead of being labeled as a "free or reduced price child" in the cafeteria.

Attention on childhood hunger skyrocketed in Alexandria after release of a report prepared for the Alexandria Obesity Action Network in 2014. The report identified food access problems in the city indicating "Alexandria is one of the wealthiest communities in the nation; however the report estimates that as many as one in five Alexandrians, disproportionately children, are living in households struggling to make ends meet."