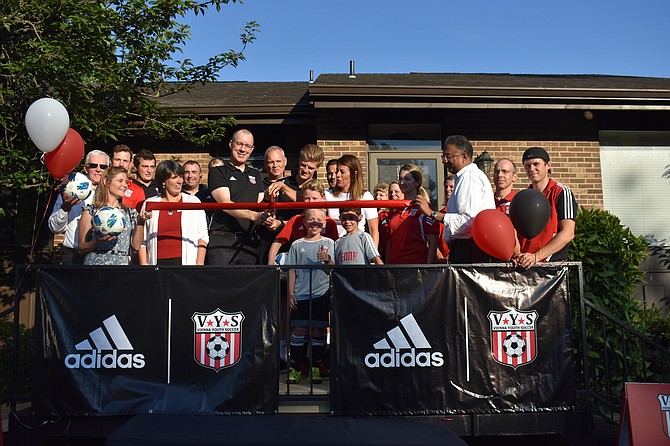 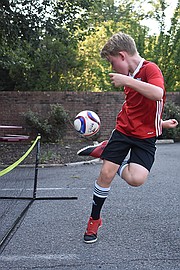 It was the end of an era – a 44-year wait brought to a finish. As the scissors closed and the red ribbon fell to the ground, applause and cheering broke out in front of the new Vienna Youth Soccer office.

“For 44 years, we’ve been working out of garages, kitchens, library conference rooms and cars to basically run the soccer club,” said Bob Lesjak, president of Vienna Youth Soccer. “It’s been high time that we now have effectively our own office space.”

On July 10, league leaders, players, parents and coaches attended a ribbon-cutting ceremony to celebrate the opening of the club’s first office space, located on Maple Avenue.

Though the ceremony marked the end of the league’s need for an office, it really was a new beginning for the club’s staff. League technical and operations staff have been working out of this office since April 1 and have already seen an increase in communication.

Technical Director Kevin James said the office can serve all the league’s players in their varied needs.

“Whether we have a team that is getting to go and compete at a national championship, or we have an individual who’s coming in to sign up for soccer for the first time, this office can aid both of those groups in some way and everyone in between,” James said.

Town of Vienna Mayor Laurie DiRocco spoke at the event and took part in the ribbon-cutting ceremony. DiRocco said she loves Vienna Youth Soccer – both her daughters played for the league and really enjoyed it.

In this league of 3,500 players, community is a central aspect. Various events foster this feeling of solidarity, such as the ribbon-cutting ceremony or even the World Cup watch party that the league held on Sunday at Glory Days Grill.

Even after players graduate, Vienna Youth Soccer makes an effort to include them in the community through a newsletter, and the league plans to create an alumni Facebook page.

“We would like to provide a lifetime of soccer,” Program Manager Adam Coolbaugh said, “not just a relationship that ends as soon as you’re not wearing the VYS uniform anymore.”