Redistricting: Wrong by Both Political Parties 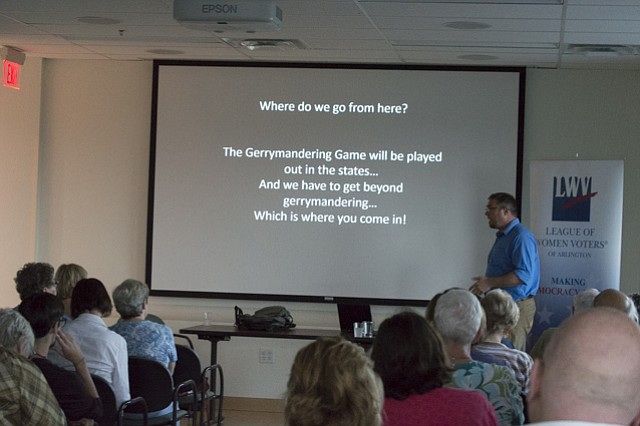 Residents from throughout the area came to listen and express their concerns July 12 about gerrymandering.

“The goal of gerrymandering is to get as many seats in a legislature, in the assembly, in congressional delegations,” and to use that plan to get more seats than the statewide vote would normally occur, said Michael Latner, associate professor of political science at California Polytechnic State University and Kendall Voting Rights Fellow during a meeting at the Arlington Mill Community Center located in Arlington.

The League of Women's Voters of Arlington hosted the event called “Gerrymandering and the End of Popular Sovereignty” to raise awareness about political redistricting through gerrymandering. The event was also a way for the organization to educate the community about the issue.

Jackie Rivas, co-chair of the league’s redistricting committee, said they partnered with OneVirginia 2021 in getting a constitutional amendment to the Virginia constitution. Rivas said that their goal is to get a bill ready for the 2019 General Assembly session and before the 2020 census when the district lines will be redraw. 2010 was the last time the lines were redrawn.

“We have a very short time to make it happen, we have to have a bill ready to go to the General Assembly by the beginning of January,” said Rivas.

Latner said gerrymandering comes in many forms which includes race but he more recently has seen gerrymandering increasing where one political party gains advantage over another.

Gerrymandering is considered legal since the U.S. Supreme Court hasn’t decided the status of it yet, said Latner. Without such a ruling, political parties have had the freedom to gerrymander.

According to the One Virginia 2021 website, Virginia is ranked one of the most gerrymandered states in the country, ranking number 5 on the congressional and state level.

Latner described how the Republican party has a strategy in how they could win seats. He gave an example in which even though the Democratic party won most of the nationwide congressional vote, Republicans still gained 36 seats in the House of Representatives.

In the state of Virginia, the Democratic party won by a 9 percent margin of the state vote, but failed to win the majority of the seats to gain control of the state legislature, Latner said.

Rivas said if they can get a bill passed in 2019 and 2020 it will give a chance for voters in the Commonwealth to vote on gerrymandering and support independent, nonpartisan redistricting. Currently, by using extensive data resources, districts can be drawn to encompass certain voters.

“The legislators don’t need to pay attention to their constituents because the maps have been draw in a certain way, they will be reelected,” said Rivas.

Latner said that even though people are going out to vote, votes are not really counting due to gerrymandering. He said people should ask their local officials and demand their state legislators to have nonpartisan redistricting and to support voting reforms such as multi-member districts.