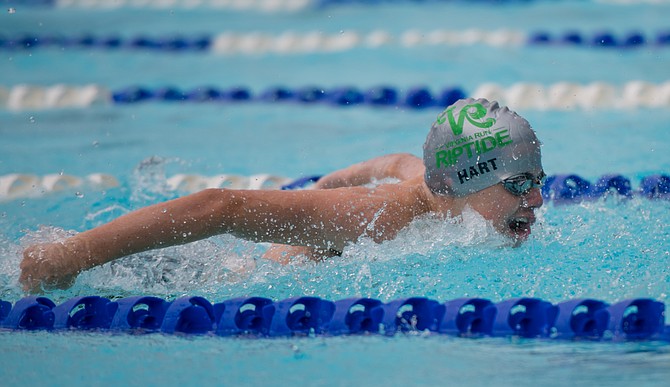 Caitlin Do takes off for her second place finish in backstroke.

The Virginia Run Riptide swam hard but lost in a close meet on Saturday, July 21 to the current division four leader, the Crosspointe Cruisers. In a closer-than-anticipated meet, the Riptide assumed the lead going into the relays but was edged out by undefeated Cruisers 219-201.

The Riptide came to Saturday’s meet off a strong showing at the NVSL All Star Relays on Wednesday where they fielded six teams and the Boys 8 & Under Free Relay and Boys 8 & Under Medley Relay placed first. The team also celebrated their senior swimmers in an emotional send-off at the meet on Saturday that captured the many years of hard work and community spirit that goes into being a Riptide family.

In the 15-18 age group, third place finishes were delivered by Bobby Monroe in freestyle, Anthony Tonthat in backstroke and Harry Schlatter in butterfly. The breaststroke was an exciting sweep with William Beamon, Thomas Beamon and Harry Schlatter swimming one-two-three putting crucial points on the board and giving the Riptide a lead in the meet for the first time since the freestyle event. Allie Hickey and Didi Pace placed first and second in freestyle, with Sarah Boyle and Chelsea Nguyen taking first and third in backstroke; Hickey delivered second in breaststroke and Boyle brought home first in the fly to keep the Riptide ahead in scoring going into the relays.

The relays were intense competition with brilliant swims by both teams that had the crowd on their feet. The 8 & Under boys and girls relays brought home first place as did the 11-12 Boys Medley Relay team and the 15-18 Girls Medley Relay team.

While the Riptide didn’t win their last meet, the score was closer than many thought it would be against the powerhouse Crosspointe team. The Riptide now turns their focus to hosting the NVSL Divisional Meet, welcoming the top swimmers from the 17 divisions to battle it out for a chance to swim in the final meet of the season, the NVSL All Star Meet.