Are there historical buildings or sites in the office park on Association Drive south of the Dulles Toll Road? 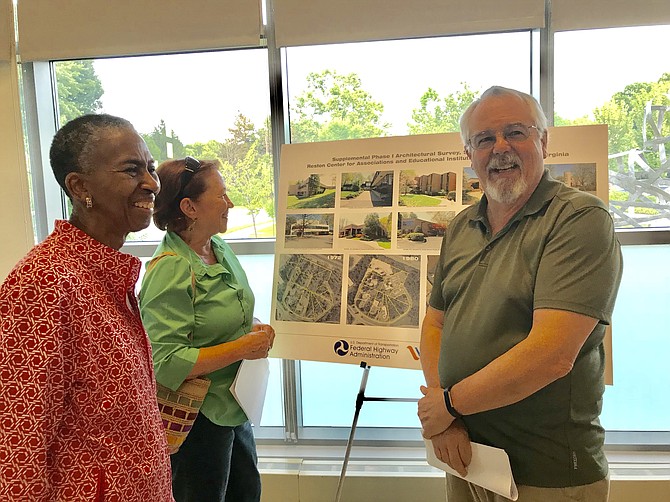 During the Fairfax County Department of Transportation (FCDOT) public involvement meeting for the “Soapstone Connector Supplemental Phase | Architectural Survey,” held Thursday, July 19, residents ultimately understood the purpose of the meeting was to gather by survey "their" feedback on the question of whether or not the building at 1916 Association Drive in Reston and/or sites on Association Drive may be potentially eligible for the National Register of Historic Places and should they be listed on National Registry of Historic Places.

FCDOT also wanted to know if residents had comments "relative to the eligibility of the building and/or office park along Association Drive for listing on the National Registry of Historic Places."

Comments regarding the potential eligibility of the sites will be accepted through Friday, August 3.

According to presenter, Audra Bandy, Project Manager FCDOT, the department had commissioned two historic resource studies for the project, both prepared by qualified architectural historians. The first was an Environmental Assessment presented to the public in the fall of 2017; it indicated "that the buildings on Association Drive are not eligible for listing on the National Register of Historic Places because they are all less than 50 years old."

The Soapstone Connector Project aims to provide a direct connection between Sunset Hills Road and Sunrise Valley Drive crossing over the Dulles Toll Road, as recommended by the Reston Metrorail Access Group.

IN JANUARY 2018, the Virginia Department of Historic Resources requested a Supplemental Phase I Architectural Reconnaissance Survey.

The Supplemental Architectural Survey results as depicted on the slide presentation Bandy showed stated, "All but one of the ten buildings within the Reston Center for Associations and Educational Institution may potentially contribute to the Historic District. The building located at 1916 Association Drive may be individually eligible for listing on the NRHP."

Later during the question period, Audra Bandy, Project Manager FCDOT said that the building and its parcel at 1916 Association Drive were not in the direct path of the proposed Soapstone Connector but could possibly be affected by the project.

Bandy cited that if the building(s) were deemed eligible for listing on the NRHP, then construction of the Soapstone Connector would likely have an adverse effect on the site.

Such would create a domino effect triggering a ruling, stating unless there is no "prudent and feasible" alternative, the site must be protected. With the adverse effect ruling, FCDOT and VDOT would have to reopen alternative proposals for the Soapstone Project. They would have to go back to the drawing board and see if there was a prudent and feasible alternative, perhaps a project plan they had considered earlier.

If a new alternative did less overall harm compared to the original alignment and fulfilled the original purpose and needs of the project, then FCDOT would have to choose it.

Doug Miller of FCDOT reiterated that if they found the current Soapstone Connector Project had an adverse impact on the 10-parcel site or building(s), they would have to move the road.

Miller emphasized though that an adverse effect on the FCDOT proposed Soapstone Connector Project would not control what one or more owners of the multi-owned parcels could do with their own properties, from possibly remodeling, selling, or demolishing.

FCDOT reminded attendees of the current conditions related to the proposed project, that vehicles traveling to and from Wiehle-Reston East Metrorail Station and entering and leaving the Dulles Corridor to compete for the same road space on Wiehle Avenue, and the current Soapstone Connector Project was to provide additional multimodal capacity on a new north-south alternative to relieve congestion there. In other words, help traffic flow without the current backups.

FOR MORE INFORMATION, visit ww.fairfaxcounty.gov/transportation/projects/soapstone-connector or contact Audra Bandy at