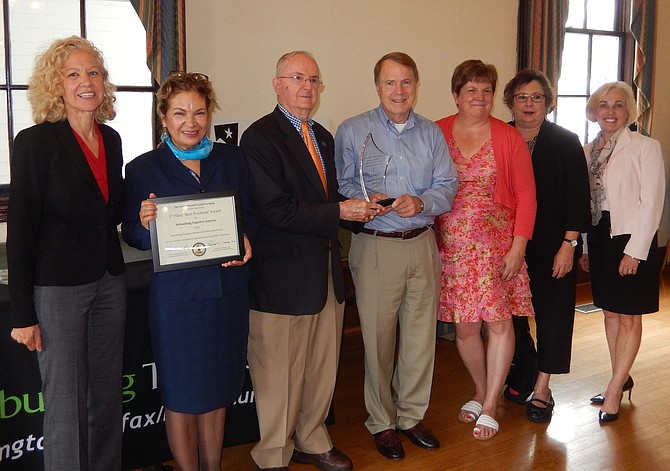 It’s tough enough getting older, but senior citizens increasingly face danger from falling and suffering serious injuries in their own homes. And those on low incomes are hard pressed to be able to afford the needed repairs to prevent these mishaps in advance.

But that’s where the Fairfax City-based nonprofit, Rebuilding Together of Arlington/Fairfax/Falls Church, comes in. It’s new venture, RT Express, uses small teams of skilled volunteers to make targeted repairs that help seniors live safely in their homes so that they may age in place.

This program has proved extremely successful. Over the past two years, 75 RT Express projects were completed by teams of four to five trained volunteers. Via half-day projects, their work corrected 93 percent of the falling hazards and 90 percent of all hazards – at a cost of $500 or less for materials per home.

Recognizing the importance and effectiveness of making surprisingly simple, low-cost repairs to correct these hazards, the Commonwealth Council on Aging recently presented Rebuilding Together with its first-place, “Best Practices” award for 2018.

GIVEN TO A PROGRAM that helps low-income homeowners age in their homes safely, the competitive award came with a $5,000 prize funded by Dominion Energy. And Rebuilding Together officials, representatives and volunteers were honored during a ceremony in Old Town Hall in the City of Fairfax.

“We’re thrilled to have Rebuilding Together in the City of Fairfax,” said Mayor David Meyer.

He recalled how the organization helped fix the home of an elderly Fairfax woman and her son after a contractor she’d hired left it in shambles. Built in 1949, it had sustained serious water and termite damage over the years, so she tried to have it repaired.

But instead, the unscrupulous contractor gutted her house, left it uninhabitable, took her money and disappeared. Her home was then condemned, and she and her son had to rent a basement apartment elsewhere – for nearly two years – while still paying the mortgage in Fairfax.

However, after learning of their plight from the City, Rebuilding Together mobilized a team – with widespread community support and help – and pretty much rebuilt the decimated home from the ground up. Said Meyer: “We were very impressed with what Rebuilding Together did.”

Richard Lindsay, chairman of the Best Practices Committee of the Commonwealth Council on Aging, also praised the organization. “Rebuilding Together is an amazing program,” he said. “We get a tremendous number of applications [for our Best Practices award], each year. We look at innovation and whether the work is cost-effective and replicable.”

He said Rebuilding Together provides a “tremendous service to people unable to make modifications in their homes. These things are critical, and they do it in a short period of time and for a modified cost for older people and the disabled.”

“More than one in four older people fall each year – and one in five falls cause serious injuries, such as head injuries and hip fractures,” explained Lindsay. “And falls are often followed by disabilities, so these home repairs are important because they help prevent falls.” He then called Rebuilding Together’s program “a center for this type of innovative thinking that we need to have more of.”

Stepping to the podium, Rebuilding Together Executive Director Patti Klein said, “It’s indeed our honor to receive this award.” She also thanked Christy Zeitz, executive director of the Fellowship Square Foundation, which nominated the organization for this recognition. The Foundation owns buildings where many low-income, older adults live, and Rebuilding Together’s team installed 80 grab bars in their homes.

Caroline Blakely, CEO and president of Rebuilding Together’s national organization, said, “We’re very proud that we’re strong and innovating. The national office and its affiliates – including our Arlington/Fairfax/Falls Church affiliate – created handbooks with scientifically based safety principles for rehabilitating a home.”

Noting that more than 65 percent of the people her organization serves are senior citizens and veterans, she said, “I’m so excited that Patti was recognized for the great work she’s doing here.”

STARTING IN 2015, said Klein, her group began concentrating on making 30, standard repairs enabling older residents to remain in their homes safely and in a healthy environment.

“We focus on four people working four hours and spending about $400 making quick and specific repairs,” said Klein. “We’ve now done over 75 such projects in three years. We want others to take advantage of the strategies we learned. But we did this as part of our communities and working together with others, including case workers and social workers.”

She then thanked Meyer, the City of Fairfax, other people and entities and Rebuilding Together’s “talented and passionate staff.” Praising all the volunteers and RT Express team leaders, too, she said, “They work with the homeowners, obtain assessments on the homes, get the volunteer workers and do the paperwork. Together, we can do great things throughout the commonwealth.”