Behind the Scenes at Herndon Festival
Votes

Behind the Scenes at Herndon Festival

There are streams of teams that make every Festival, even a rained-out one, a success. 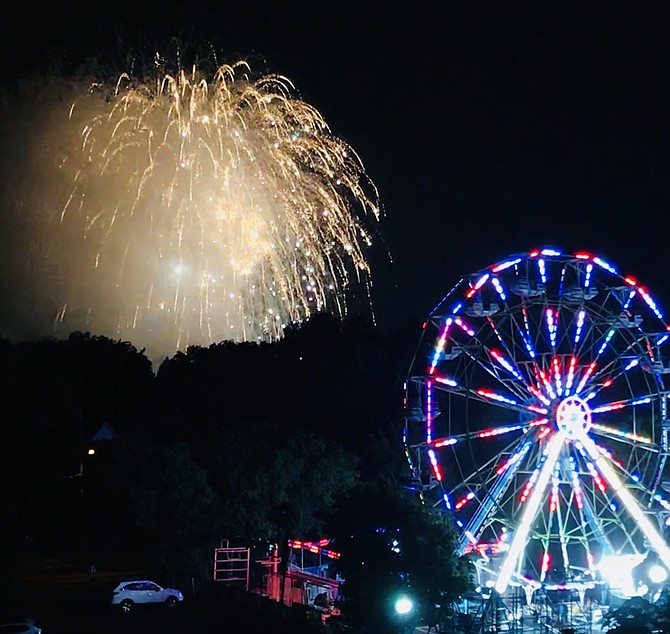 At least the rain momentarily stopped on Saturday night, and the fireworks lit up the sky. The fireworks were choreographed to music. Songs such as "My Little Town" rang loud and clear, stirring the hearts of festival goers. Photo by Mercia Hobson. 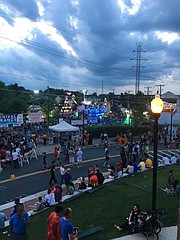 On the evening of Friday, June 1, 2018, the Herndon Festival attracted a large crowd of excited patrons ready for the thrill of a carnival with the fun of outdoor concerts. 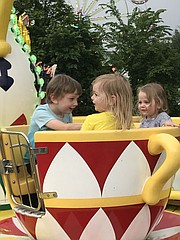 The Avenoso twins, Claire (center) and Adeline (left) enjoy a spin with their brother during the one-hour early Thursday admission for Northwest Federal Credit Union employees and their families. NWFCU was the Title Sponsor of the 2018 Herndon Festival. Thirty minutes into the hour and thirty minutes before General Admission opens, the rains begin. 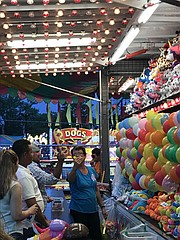 A couple of Festival goers want to try their luck at the Midway by Jolly Shows during the Herndon Festival 2018. 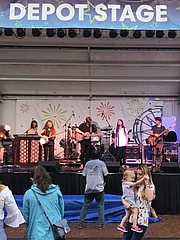 Megan Hervey and her daughter Haley dance to the music of "The Hunts" on Saturday, June 2, 2018, at the Herndon Festival. 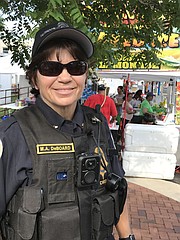 "We take security very seriously here,” says Chief Maggie DeBoard, Town of Herndon. "Which is why we made the decision last year to close Elden Street to vehicles between Monroe and Center Streets. Our people are not just wandering around. They are strategically placed and assigned." 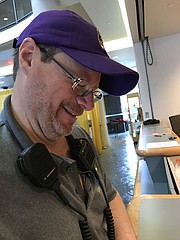 John Mosesso manages volunteers for the Herndon Festival. "Volunteers make this a community event, which contributes greatly to allow this to be a free admission event." Mosesso's unofficial volunteer count as of Sunday was more than 450 individuals, including those serving through civic organizations.

No one ever thought there would be a Herndon Festival like this one. Although forecasters predicted unsettled weather and rain, never in all of its years of operation has the Herndon Festival experienced so many episodes of torrential rain, which unrelentingly drenched the long-awaited and yearlong-planned event held Thursday, May 31 – Sunday, June 2, 2018. The Festival is an unofficial trademark of the Town of Herndon.

Eventually, the gods of rain did win the battle and organizers closed the Festival Sunday afternoon, well before the 7 p.m. official closing, shutting down the last festival in the Historic Downtown District.

The rain did not, however, win the war. It did not drench the spirits of the Town staff, the men and women of the Parks & Recreation Department who spent the last year along with the Executive Festival Committee and all support teams throughout the town organizing the event. Instead, they watched musicians not playing and performing.

The weather did not wear down the Public Works Department who set up, checked and continually maintained, and then took down much of the equipment and banners in poor weather.

The Town of Herndon Police Department kept everyone safe, as did the fire and rescue crews of Fairfax County Fire Station #4 Herndon.

Hundred of unsung heroes carried on through the rain wearing improvised raincoats made out of plastic trash bags, and nearly every one of the hundreds of volunteers scheduled for given shifts showed up for their assigned tasks and tackled their service requests regardless of the weather.

On Friday, things looked better, and there was a short respite. Rides twirled, children tugged parents this way and that, and music played throughout the town. Arts and craft vendors sold their items and the delicious smells of ribs, fried dough, and kettle corn turned the Town of Herndon into the sought after moments of summertime fun. Organizers even got to shoot off the fireworks Saturday as the mist and rain lifted.

It was what thirty-eight years ago, Arno Randall and a group of friends thought a "little" festival in the town of Herndon could be with community support. What began with thoughts of a one-day event grew to a four-day festival which demanded an impressive number of resource personnel- volunteers, musicians, carnival people, vendors and police, security and more.

Cindy Roeder is the Director of Parks and Recreation for the Town of Herndon. The Festival comes under her umbrella. Asked in an interview for her thoughts on this year's event, Roeder wrote and provided the following statement.

"You can't produce an event of this complexity without the support of a dedicated and hard-working team. You know you have a great team when you watch them collectively do the best the can to make the festival a success, despite the less than desirable weather.

And that includes all the town staff, volunteers, civic groups, and sponsors

and vendors. Herndon does this well because we are close-knit- community, with a tremendous amount of pride in our town."