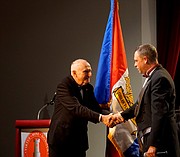 Chris and Christina Weise and children.

There was not one, but three standing ovations in the McLean High School (MHS) auditorium on the evening of Wednesday, May 30, 2018. The auspicious occasion was a formal awards ceremony to celebrate approximately seven years of effort from roughly 240 McLean High School students each year, who comprise the concert band, marching band, guard, jazz, all-state, all-district, and percussion. Their cumulative effort resulted in the school being the recipient of one of the nation's highest awards that can be presented to an ensemble band program. This rare, prestigious and coveted music recognition is known as the Sudler Flag of Honor by the John Philip Sousa Foundation.

Tuba player, guest conductor and Project Chair for the Sudler Flag of Honor, Roy C. Holder, said the award winners are deemed to possess "quality beyond anything normal." He was speaking on behalf of a 22-person committee, comprising former Sudler Flag honorees, who together decided that the Sudler Flag of Honor would be bestowed upon McLean High School in late December of 2017. The presentation of the award was conducted during a special Wednesday night concert performed by the MHS Symphonic Band.

McLean High School's Band Program is one of only five schools in Fairfax County to ever receive the Sudler Flag of Honor two times. This is a big deal for Band Director, Chris Weise. The award represents a culmination of seven years of work that has to be tediously and painstakingly recorded and documented in order to show a whole history. "This is all about the students," he said. "We are celebrating all the students who have come through here. This award represents each one of you!"

The audience comprised proud on-looking band parents with beaming smiles and occasionally misty eyes, as well as family, friends and many other contributing members upon whom the award depends. There was a sense of something big happening. At least seven other Sudler Flag awardees traveled to attend this ceremony. Band directors from Mr. Weise's elementary school, middle school and high school band programs watched fondly as the pupil they mentored, and now profoundly respected, smiled for pictures next to Roy Holder and the Sudler Flag. Even MHS Principal, Ellen Reilly, and Mrs. Christina Weise, joined the band on stage as sign-language interpreter and voice narrator, respectively, during the Symphonic Band's performance of Their Blossoms Down by Samuel Hazo.

Weise gave special thanks to Sean Rolon, the MHS Performing Arts Department Administrator and to Principal Ellen Reilly, both of whom have provided enthusiastic and unwavering support for all of the music programs. "This award wouldn't be possible without their support," said Weise.

He gave a heartfelt shout out to his wife, Christina, and his parents, saying, "I can't tell you how much family is important to me. This takes so much time, and I can't thank my family and wife enough for all their support over the years."

THE CONCERT performance and award presentation was a moving experience that can be nicely surmised by a few profound words said by Denny Stokes, the founding conductor of Symphonic Winds for the Northern Virginia Youth Winds (NVYW) program, and also a former Sudler Flag award recipient himself during his 32 years as an FCPS band teacher. He said, "People in this room are stars the world will never know."

How fortunate the city of McLean is to have such a high concentration of musical talent in Fairfax County. How truly special and uniquely distinguished. FCPS high school performances are free events and open to the public. The entertainment value and affordability of these concerts is a rare occurrence in Northern Virginia. It's an opportunity begging to be exploited by those with good taste, who also know a good deal when they see it. There are several dining options nearby that make grabbing dinner and a concert during the week a very doable, pleasantly surprising date night. Children also love the performances because they are casual and normally completed within an hour. Bringing the community together and sharing the love of music is one way to help our music stars shine more brightly and spread their light.