A Save the Farm Rally
Votes

A Save the Farm Rally 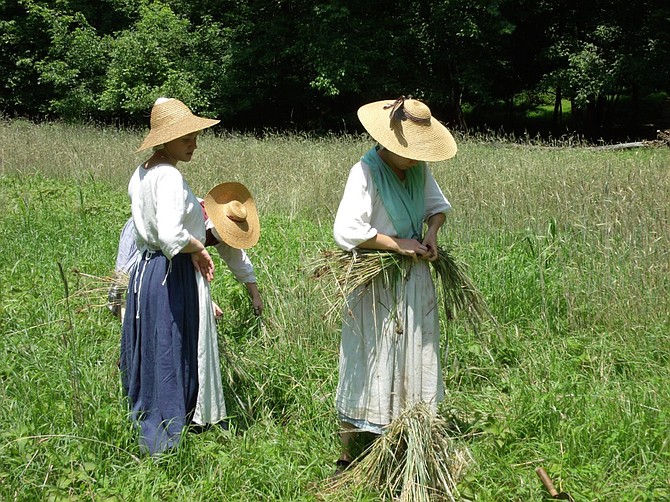 Since 1973, the Claude Moore Colonial Farm has been a living history museum, serving 2 million visitors.

Members of the Board of Directors for Friends of Claude Moore Colonial Farm (from left): Elliott Curzon, Tim Meisburger, Anna Eberly, and Dr. Virginia Norton.

Master of Ceremonies Corky Palmer addresses the Save the Farm Rally, sponsored by the Friends of Claude Moore Colonial Farm on Thursday, May 31, 2018, at the Pavilions of Turkey Run.

The U.S. National Park Service wants to close Claude Moore Colonial Farm at Turkey Run in McLean on Dec. 21, 2018. Since 1973, the farm has been a living history 18th century museum that portrays family life on a small, low-income farm just prior to the Revolutionary War. A Save the Farm Rally, sponsored by the Friends of Claude Moore Colonial Farm, was held on Thursday, May 31, 2018 in the pouring rain, at the Pavilions of Turkey Run, to get the word out to residents on what they can do to save it.

According to Elliott Curzon, a member of the Board of Directors of Friends of Claude Moore Colonial Farm Negotiating Committee, the Parks Service has told them that they intend to close the farm in December because they would not sign their agreement.

“The basic issue is that the agreement that they presented would increase our operating costs and reduce our ability to generate revenue. And it would put us into a death spiral. The key issues are the term of the agreement, the operating limitations they would impose on us, and the ability to generate revenue by operating the Pavilion. Those are the issues we’ve been trying to deal with for some months,” he said.

He added: “It took the Park Service six years to begin negotiating seriously and they presented a take-it-or-leave-it demand. The upshot is that we intend to save the farm through the assistance of our Congresswoman, Rep. Barbara Comstock (R-10), and the aid of other members of the House, including our local delegation who are questioning the Park Services’ activities with respect to our agreement. The farm is unique; we are the only independently operating, self-funding farm in the United States. We get no financial support from the Federal government. In our view, we should be the exemplar of a public-private partnership, but the Park Service doesn’t see it that way yet.”

ACCORDING TO DR. VIRGINIA NORTON of McLean, President of the Board of Friends of Claude Moore Colonial Farm, as a result of receiving notice that the Park Service intends to close the farm, “we will use every resource available – public, private, legislative, administrative – to keep the farm open and operating for the public,” she said.

“We are rallying the troops, really, to write their Congressmen, to write their Senators. Barbara Comstock, our representative, has introduced legislation H.R.-5201, and we want it to be passed and we need our Senators to introduce the companion bill in the Senate and so we are encouraging them to do that. And if they want, they can write the Park Service and Secretary of the Interior, Ryan Zinke, and so we are rallying the troops,” she said. Del. Eleanor Holmes Norton is also a co-sponsor of legislation introduced to keep the farm open.

Dr. Norton said there is a petition on Change.Org with almost 5,000 signatures directed to Secretary Zinke, asking him to intervene and relieve them of having to follow the Park Service rules that only apply to Park Service sites.

According to Jenny Anzelmo-Sarles, a spokeswoman for the National Park Service: “There continues to be a lack of understanding about the agreement the National Park Service offered to the Friends of Claude Moore Colonial Farm. We acted in earnest to ensure the relationship’s future, exhausting all possible legal options to continue the relationship, including a potential lease, a potential concessions contract, and finally a proposed 10-year cooperative agreement. The cooperative agreement included standard terms for National Park Service partners across the country. At the end of the day, the Friends of Claude Moore Colonial Farm rejected all of these options.”

“While the National Park Service and park visitors benefit from the services of partners, concession operators and volunteers, national parks belong to all Americans, and none of them are privately operated,” she said.

“The National Park Service is focusing on the future. We look forward to working with the public and the many dedicated volunteers to shape what that looks like,” she said.

OF THE RALLY with 100 people that included hot dogs and a cash bar, Anna Eberly, Board Member of the Friends of Claude Moore Colonial Farm, said: “The idea is to get people together, let them know what we’re doing to save the farm, hear their ideas to saving the farm and then give them materials and literature that they can hand out to their friends and co-workers so that we can get the word out even more. The purpose is to keep the farm operating; that’s all we want to do.”

Added Farm Site Manager Daniel Gray: “I would be very disappointed if the farm closed, because the visitors would be losing the expertise of our 18th century farmers, our costume interpreters who have studied history and who are very experienced from a first-hand perspective from being out in the fields and actually using the tools and wearing 18th century clothes all day.”

Tim Meisburger, a Board Member who built a copy of the Ball-Sellers farmhouse on the property and who has been volunteering since 1986, added: “I think that our objective is to save the farm for the children of the region. I think adults really love coming out here but more than anything, the children are the ones that they don’t know where food comes from; they are not used to animals; they’re not used to crops. They have no real exposure to farm life and they have less and less exposure in school to history – so the farm serves two purposes: to help teach the children about their past, but also helping them to live in the world.”

Corky Palmer, Master of Ceremonies for the rally who ran the Environmental Learning Center and Gift Shop for 10 years, added: “The significant thing about Claude Moore Colonial Farm is that it is a family-oriented place. My wife first started here back in 1990 with kids for the Environmental Living Center, would bring them out for overnight camping for three nights of camping and she is always hearing back from her students how wonderful it was that they got to come to Claude Moore Colonial Farm.”

Chris Weiss, retired Fairfax County teacher and volunteer since 1986, added: “I certainly hope there will be no closure and I think that would be a real big mistake for the community and the state of Virginia, Maryland, the District of Columbia and Pennsylvania, all the people who come here and have the experience of seeing an indentured farm, so I certainly hope the powers-that-be get their senses together and realize it’s such a valuable asset for the community to have.”

Cindy Palmer, a retired Fairfax County teacher from Chantilly, added: “We need to keep the farm opened because it’s the only place where children and families can come and see how common people lived. You’ve got places like Mount Vernon and Williamsburg, but that’s how the wealthy lived. This shows how 90 percent of Americans were living at the time. We need to save that.”

“This place is beautiful; it’s authentic; it’s a wonderful place to bring children or a family to learn as much about history and the real history of what people went through back then,” said JoAnn Abbott, a volunteer re-enactor from Dale City who attended the rally. “I love re-enacting and I love teaching. I’ve been a teacher in the past; I’ve been a re-enactor since my 20s… Leave this little oasis of history and beauty so our children can learn from it.”