In Cherrydale: From lunch counter sit-in to 9/11. 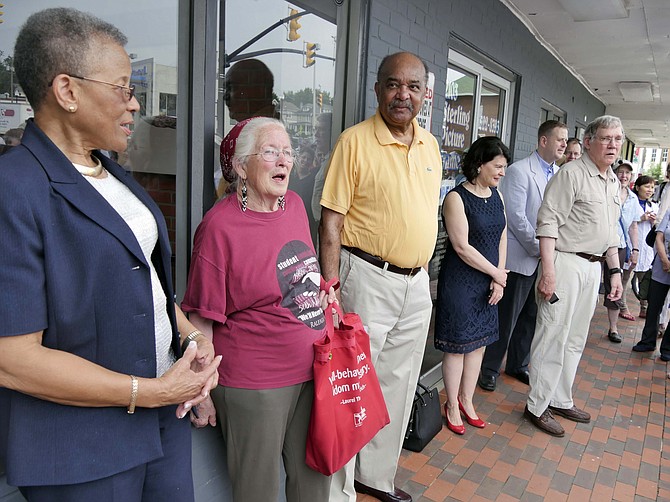 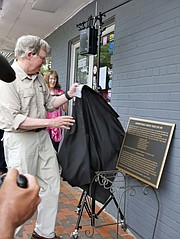 Greg Embree unveils the plaque commemorating the 1960s lunch sit-in in Cherrydale. It will be affixed to the building at 3815 Lee Highway where the sit-in occurred. 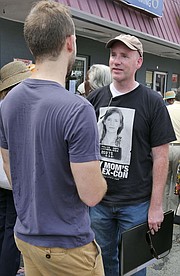 Loki Mulholland, son of Joan Trumpauer Mulholland, wears his "My mom's an ex-con” T-shirt at the Cherrydale 125 Celebration on June 9. He is the producer of the "An Ordinary Hero,” a documentary about one Southern white woman's courage to follow her convictions.

M.J. (Mike) O'Brien studies the display of Cherrydale history at the branch library. He says he met Joan Trumpauer Mulholland through her children after he moved to Arlington in 1977. He has written the book "We Shall Not Be Moved" about her. "I think I helped draw attention to what she did. There wasn't much about her role at the time."

Joan Trumpauer Mulholland looks around the crowd of over 100 observers and political officials gathered for the unveiling of the plaque commemorating the Cherrydale lunch counter sit-in on June 9, 1960. "This is a bigger crowd than we had when we left the sit in."

Ethelene Crockett Jones, another participant of the 1960s sit-in adds, "and much friendlier and without a police escort."

Festivities for the Cherrydale 125th anniversary began on June 9 in the parking lot at 3815 Lee Highway, the site of the sit-in that rippled through other local establishments. It led to integration of lunch counters in Arlington and Alexandria.

Greg Embree, member of Cherrydale's 125 Committee, pointed out it was remarkable that these demonstrations that spread around the country rarely had even a dozen protesters. "There were six individuals at Cherrydale." He added that when JFK met with Martin Luther King, he told him the sit-ins had sensitized him to the civil rights struggle.

"I want to play a song that is appropriate for the occasion and I hope you will sing along."

"We Shall Overcome" blasts out of the speaker and a couple of voices join in and the music spreads through the crowd. Mulholland reaches down with both hands and grabs one hand on each side as the next verse begins, "we'll walk hand in hand."

The crowd gathers closer, vying for a view as Embree pulls the black cover revealing the plaque etched with names of the participants in the sit-in with the date and occasion. The plaque will be affixed to the building that now serves as a small strip mall on Lee Highway. "One thing we are celebrating today and decades from now is our own struggle to expand freedom, equality and justice in this country. In that spirit we unveil this plaque."

The celebration continues at the Cherrydale Branch Library festooned in balloons where Boy Scout Troop 149 hands out programs for the official ceremony. Volunteer firefighters roam through the crowd along with some attendees wearing costumes reminiscent of a previous era. A photo exhibit of Cherrydale history has been prepared by Greg and Suzanne Embree based on research they began in 2015. It focuses on the desegregation of Stratford Junior High, the lunch counter sit-in and the role of the Cherrydale Volunteer Fire Department at the Pentagon on 9/11.