Concrete Cornices Crash Into a Popular Dining Area in Herndon

3,000-5,000 pound decorative cornices fall off a 3-story commercial building; no one was in the dining area at the time. 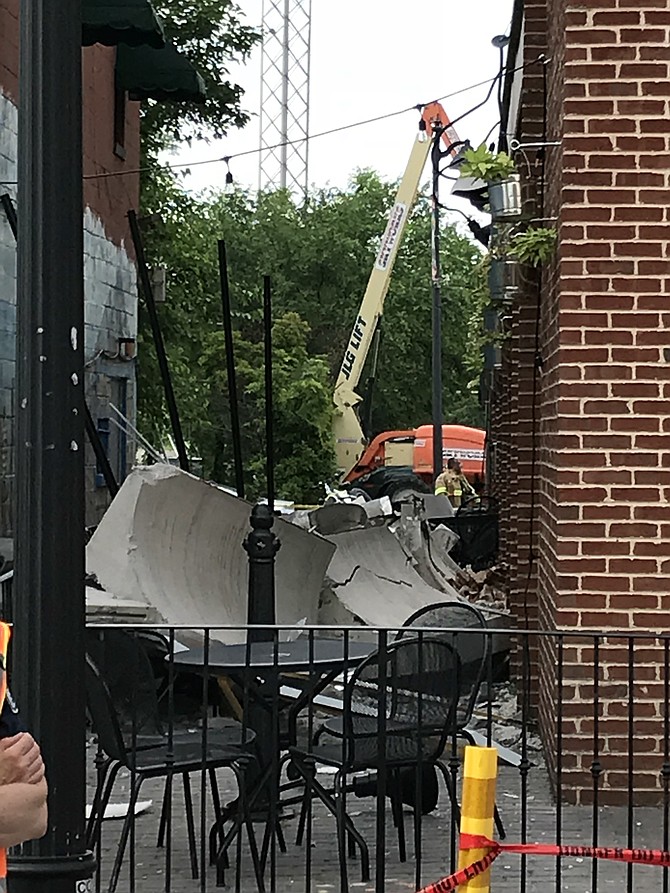 "This is completely unprovoked. There was not a gas explosion. Nothing struck the building," said Fairfax County Fire & Rescue Department Battalion Chief Michael A. Deli. Photo by Mercia Hobson. 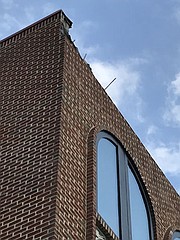 The area on the right-hand side of the three-story commercial building at 754 Elden Street in Herndon shows where the concrete decorative cornices rested up until Saturday, June 9 when they fell for unknown reasons.

The commercial building at 754 Elden Street remains closed after multiple concrete decorative cornices fell off the building. Investigations are underway to determine the cause. 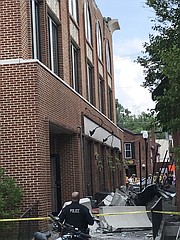 Multiple concrete decorative cornices crashed off the roof edge of a 3-story commercial building and into the exterior dining area of Sully’s Pour House, a popular restaurant in Herndon. The cornices weigh a reported 3,000-5,000 pounds each. Most unusually, no one was in the area at the time.

On Saturday, June 8, at approximately 4:30 p.m. multiple Fairfax County Fire and Rescue units were dispatched for a roof collapse at 754 Elden Street in the Town of Herndon.

A Technical Rescue Operations Team was also dispatched. Units arrived on the scene of the three-story commercial building with damage to the length of one side of the roofline and its concrete decorative cornices, similar in size and look as jersey barriers, filling a long narrow outdoor dining space and pedestrian walkway.

The crews conducted a search of the area and the building for any occupants. No injuries were reported.

Fairfax County Fire & Rescue Department Battalion Chief, Michael A. Deli was on site. He said the Technical Rescue Team had arrived on scene and assessed the building. Asked what may have caused the cornices to fall from the building, Deli answered, "This is completely unprovoked. There was not a gas explosion. Nothing struck the building. They just fell off. It is a decorative cornice. Our guys estimate the pieces weigh 3,000 to 5,000 pounds each. They are solid concrete. No utilities are damaged."

Deli said that the Herndon Building Inspector was on his way. "We do not know how many more will continue to fall," he said. "We searched the upper floors, and no one was at work."

"This is the extent we can do," Deli said. "We’re keeping people away and waiting for the building engineer to give us the next step." Looking toward the rubble and concrete, Deli said, "Herndon's angels were here."

In interviews after the accident, eyewitnesses described hearing nothing before the collapse. Instead, they observed objects falling down the side of the building and then a loud crash.

Cassie Berman is the bartender at Sully's Pour House. The restaurant's exterior wall faces the beer garden where the decorative cornices crashed down. She was inside the restaurant at the time of the collapse as was fellow bartender, Jason Frederick. Berman described what happened.

”I was looking out the window pouring a beer when I saw a huge object fall outside into the patio area. Deafening sound; absolutely. Then a huge wall of sand and dust. ...I felt nothing beforehand."

Frederick reported that he and Berman were behind the bar conversing with a couple. “And then it was chaos. A cannon sound. Concrete dust everywhere. My first thought was, why are a bunch of jersey walls stacked in our courtyard?" Frederick added: "The day before there were thirty people on the patio. I’m glad everybody is safe, and no one was outside then."

The commercial building houses many offices, each a condominium, said Jenna Kuhn, co-owner of Sully's Pour House. One of the companies on the upper floor is Edward Jones. On the ground floor are Sully's Pour House, Illusions Hair Salon, Herndon Nails and Spa and Soliloquy Bridal Salon. As of Tuesday morning, June 12, metal barricades surrounded the building.

In a phone interview Sunday, June 11, Kuhn expressed gratitude to the units dispatched and that there were no injuries. "We are extremely thankful no one was injured," Kuhn said.

"We are waiting for a structural engineer to deem if it is safe or not to enter." Asked how long she anticipates the building closed, Kuhn replied, "I'm hoping not long. We have the staff. This is their livelihood. This our livelihood."