Have no fear; a plan's in gear continuing the same traditions. 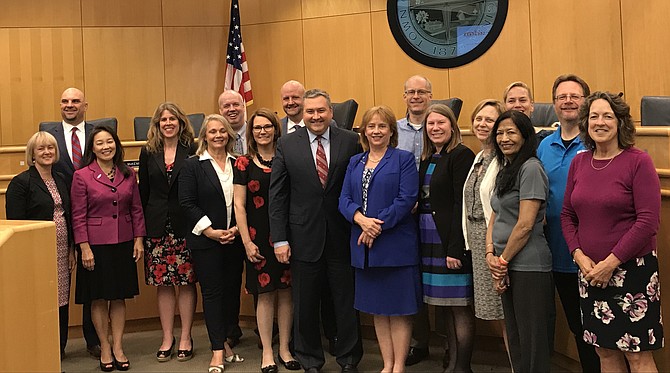 "It is our privilege to serve the residents of the Town of Herndon, “ said Jeff Bentley, President/CEO of Northwest Federal Credit Union (center, front row) as he gathers with other staff members of the financial institution, town staff, and members of the Festival Executive Committee at the Herndon Town Council Public Session held May 22, 2018. Photo by Mercia Hobson.

The parking lot currently used to stage Herndon Festival's carnival is one of the many land parcels in the Herndon Town Council approved Comprehensive Agreement with Comstock Herndon Venture for the Downtown Redevelopment Project. After the contract between the Town and Comstock is executed, the land sale and construction would preclude the use of the parking lot to stage the carnival.

The campus of Northwest Federal Credit Union at the corner of 200 Spring Street and Herndon Parkway will be the site for Herndon Festival 2019.

After 37 great years in the Historic Downtown District, the Herndon Festival is moving to a new location in 2019 due to the proposed Downtown Redevelopment Project anticipated to break ground next year. By resolution passed 6-0 during the Herndon Town Council Public Session held May 22, 2018, the Mayor and Town Council approved a resolution authorizing the Town Manager to sign a Memorandum of Understanding with Northwest Federal Credit Union to host the festival on their campus. NWFCU is located at the intersection of 200 Spring Street with Herndon Parkway. The campus will offer excellent accessibility to the festival via the Dulles Toll Road (Route 267), Fairfax County Parkway (Route 7100/286), the Herndon Silver Line Station due to open in 2020, and by the W&OD Trail.

A news release dated May 23 by Herndon Parks and Recreation reported that the Memorandum of Understanding between the Town of Herndon and NWFCU allows the opportunity for up to three annual renewals and a separate sponsorship agreement recognizing NWFCU as the festival's title sponsor.

JEFF BENTLEY, President/CEO of Northwest Federal Credit Union, attended the May 22 Town Council Public Session as did many employees of the financial institution, which is one of the major employers in the Town. Bentley spoke during the session and on behalf of Northwest Federal, he thanked the mayor and town councilmembers for considering Northwest to host the 2019 Herndon Festival. Northwest Federal Credit Union loves partnering in Herndon, Bentley said, adding that the organization with 500 employees has committed to serving more than 5000 hours of volunteer time "...all of that going hopefully to the nonprofits right here locally...we are big supporters of this community."

As Bentley wrapped up his remarks, he added: "I wanted to make sure everyone understood, it is our privilege to serve the residents of the Town of Herndon, and we are so excited to host the festival in 2019."

Cindy Roeder, director for Town of Herndon Parks and Recreation, the department that produces the festival, acknowledged that the Parks & Recreation Department and the Festival Executive Committee had been searching for a new space to hold the festival, in its entirety, for some time, "for someone to take us in as lonesome festival looking for a home. Lots of people have turned us away," Roeder confided, "Northwest Federal Credit Union was kind enough to listen to our request; got excited about the idea, and we are so pleased they are willing to take on not only the burden but the joy of hosting the Herndon Festival."

Roeder said Herndon has a history of collaborating and working with Northwest Federal and the organization has done so many good things in the local community as part of their corporate outreach program, their interest in serving and making the community a better place.

Roeder said while the carnival is a crucial element to the festival, and something people enjoy, the carnival is also the financial backbone of the festival. It generates approximately 45 percent of festival's revenue. She said it was essential to retain festival at the scope and size it currently is to include the carnival and do so at one site for various reasons.

First, Roeder told how families should be able to enjoy the festival in one location, keeping families together and second, she mentioned that the Town does not have the resources to divide its planning, logistical and security staff between two separate venues.

"It was not logical for us to split up and do something in the downtown and do something somewhere else," Roeder said. "We wanted to move together, as a unit and Northwest Federal campus makes that possible."

THE HERNDON FESTIVAL website states, "The committee also plans to present some new and different elements to keep the festival fresh and worthy of attendees’ efforts to visit the new site...The festival will remain on the weekend following Memorial Day. The dates for next year are May 30 – June 2, 2019."