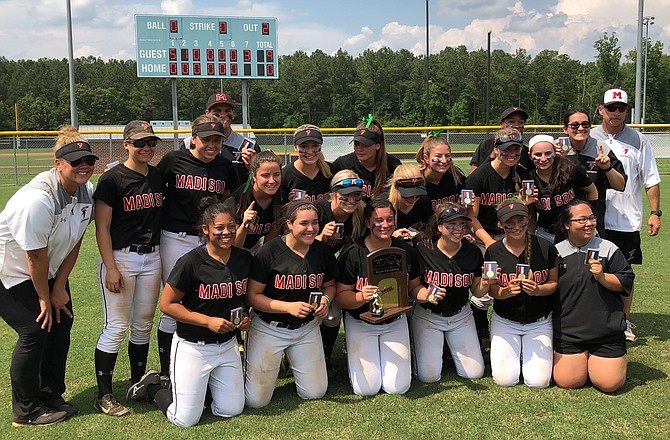 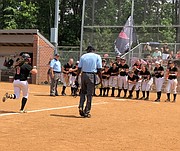 Alex Echazarreta is greeted by the team as she runs home after hitting a home run.

On Saturday, June 9, 2018, the James Madison High School softball team ended its year with a perfect season as they became the 2018 Virginia 6A State Champions.

All eyes have been on this team since the first game of the season, as they won the 2017 Virginia 6A State Championship and were the team to beat. Coached by Jim Adkins and Lauren Frankiewicz, the team was ranked as the number one All-Met team in April and opened the season with a no-hitter in which they earned 16 runs against Chantilly. That was the first of 16 games in which the opponent did not score against the Warhawks.

On April 14, Madison HS faced its biggest opponent of the regular season, Bishop O’Connell High School. Going in to the game, O’Connell was ranked ninth in the nation by USA Today while Madison HS was ranked 18th. The Warhawks walked away with a 3-2 win, which catapulted them to being ranked as ninth in the USA Today rankings. Coming off of the win against O’Connell, the next big game for the Warhawks was against the 2017 Virginia 4A State Champions, Woodgrove High School. Madison toppled Woodgrove as powerhouse senior Alex Echazarreta pitched a shutout with 12 strikeouts.

The Warhawks beat Oakton High School in their final regular season game with a 19-0 win and surged to the number three spot in the USA Today rankings. As the team continued to chase the perfect season, it became the Concorde District Champions as well as the Northern Region Champions. Entering the VA 6A State Quarter-Final game against South County, Madison HS was ranked as the number two team in the nation by USA Today.

Heading in to the 2018 Virginia 6A State Championship game against Manchester HS, the team’s head coach, Jim Adkins, had been named both the Concorde District and Region 6D Coach of the Year. Echazarreta also earned the distinction of being the Concorde District Player of the Year, the Region 6D Player of the year and the VA Gatorade State Softball Player of the Year. The Warhawks took the lead early in the game, earning five runs in the first inning. Emily Klingaman made a diving catch for the last play of the game that helped Echazarreta earn a no hitter in her final high school career game. With a final score of 9-0, the Lady Warhawks defended their title as the Virginia 6A State Champions.