A first-hand look at how the Waterfront Plan is coming together. 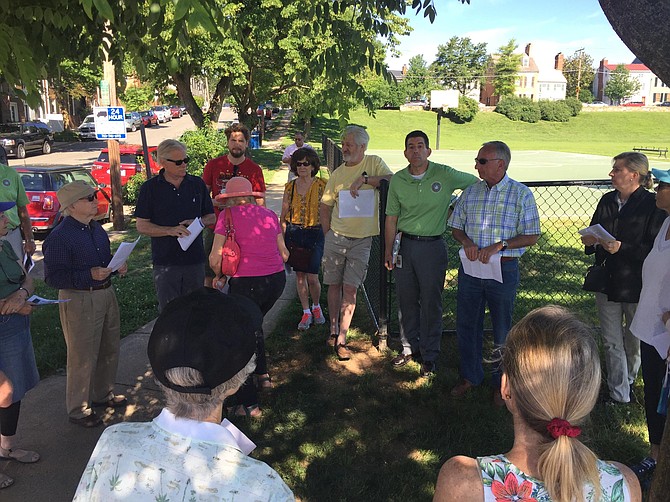 Every year, a small group of interested Alexandrians take a walk along the waterfront. For years, their city staff guide would point to derelict warehouses and fenced-off lots and ask attendees to envision a more walkable waterfront with new projects filling the rundown spaces. But on this year’s walk on June 16, that future for Alexandria took a little less imagination.

Many of the spots along the waterfront are still in-progress, but it’s progress. At the southernmost point of the Waterfront Plan, the Windmill Hill Park has faced a series of setbacks. Originally scheduled to be open by last week, the park is still ringed with metal fences and full of construction equipment.

“We are behind schedule,” said Jack Browand, Division Chief of Alexandria Department of Recreation, Parks and Cultural Activities. “Yesterday was supposed to be completion…but rain in May and high tides hindered progress.”

Plans to restore the park date back to 2002, but funding issues meant it took over a decade for work on the project to get underway. The site was a bay that was perfectly positioned to trap garbage floating down the Potomac. The new design will restore the natural shoreline to the site and turn the land around it into a city park. The site will also include a pier at the northern end and a new sidewalk. The sidewalk will open mid-summer with the rest of the project scheduled to open mid-fall.

Browand said most of the project is finished, but part of the delay comes from giving vegetation on the site room to get established before the park is opened.

On the western side of S. Union Street, Browand said the park there will be receiving some significant overhauls to make it more compliant with the Americans with Disabilities Act (ADA). In response to local residents concerned about the lack of shade and the trees taken away during some of the earlier park renovations, Browand said more trees will be put back into the site.

on the status of the three recently discovered 18th century ships buried under the waterfront.

“Just as the waterfront is transforming today, Alexandrians in the 18th century were changing their waterfront as well.”

Breen said over 100,000 artifacts had been collected from the site, mainly discovered in dwellings and privies. The largest artifacts being the three semi-intact ship hulls that were buried and built into the early expansion into the Potomac River. The ship in the middle of the site was removed last week, and the northernmost ship is scheduled to be removed sometime this week. The third ship, the largest and most intact one at the southern end of the site, is more of a challenge. The ship is larger than the others, but is still mostly buried under soil. Breen said a containment will be set up around the ship to work on safely extracting it.

All along the waterfront, the city is also at work developing and implementing a flood mitigation plan. The plan currently calls for a flood wall that should mitigate flooding in all but the 100-year event (storms of such severity that they have a one percent chance of occurring each year), with pumps on the inside of the wall to send overflow back into the Potomac.

“This is not Richmond or New Orleans with 20-foot walls,” said Bryan Meli, a civil engineer for the City of Alexandria. “We will have a pumping system in place [to mitigate floods] except in the rare occurrence with a significant breach…then just get out of town for a little while.”

The only storms Meli said would cause substantial problems would be those where the flooding is intense enough that pumping water back into the other side of the wall would do no good.

While the open walkability along the waterfront will be completed when Robinson Terminal South opens, Browand said the full promenade along the river’s edge is still two to three years away.

“A lot of the unsexy stuff happens before the promenade is established,” said Browand. “We need to establish the support systems first, so there’s a lot of tear-up without significant improvement.”

Old Town residents in the tour group had mixed feelings on the new development. Bert Ely, co-founder of Friends of the Alexandria Waterfront, had been one of the most vocal watch dogs concerning construction issues along the waterfront.

“The biggest ongoing issue is construction,” said Ely. “There’s lots of safety concerns, along with rodents and construction equipment. It’s an accident waiting to happen.”

But for others, a cohesive waterfront is a long-envisioned dream finally coming true.

“I know after years of hard work to develop the warehouses, I am just happy to see something happening down here,” said Nathan Macek, a member of the city’s Planning Commission. “King Street park is now under construction [and it’s] a more productive use of the waterfront. Many more people will living and eating on the waterfront. It will increase the economic competitiveness of Alexandria [to make it] competitive with other waterfronts.”

Trae Lamond, a local restaurateur, said he was happy that the new waterfront plans would bring in new people to his business.