Risks and rewards of new federally tax-incentivized “opportunity zones” yet to be seen. 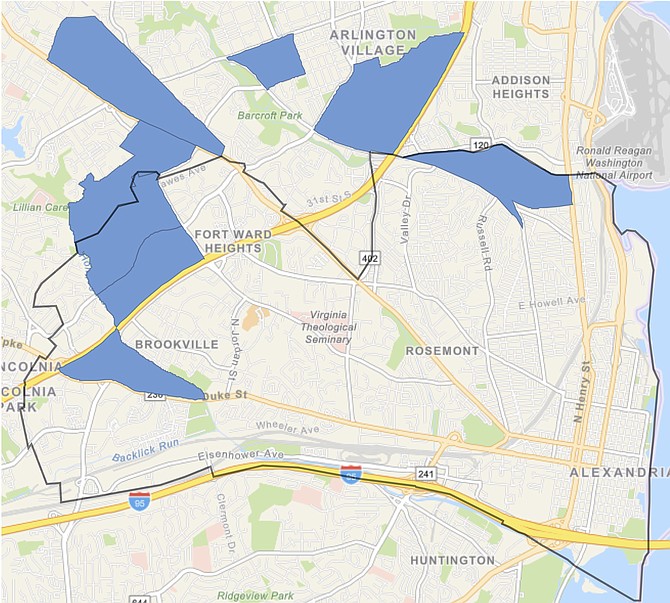 Out of 12 that were eligible, four of Alexandria’s 38 census tracts have been identified as “opportunity zones” under the new federal tax law. As a nationwide incentive to increase private investment in economically distressed communities, capital gains reinvested in real estate and businesses in these zones will receive tax benefits.

The Tax Cuts and Jobs Act, adopted in December, provides for the establishment of opportunity zones. After consulting local jurisdictions and the public, Gov. Ralph Northam (D) nominated 212 tracts throughout Virginia, including 24 in Northern Virginia, which the U.S. Department of Treasury subsequently approved. Alexandria’s zones include three in the West End — in the vicinity of the Landmark Mall, the Mark Center and the Beauregard Corridor — and a fourth in Arlandria.

Ryan Touhill, the Alexandria Economic Development Partnership (AEDP) chief of staff, said in an email: “These four tracts were deemed highest priority because they: (1) have significant economic development opportunities; (2) are included in approved Small Area Plans that contain flexible zoning such as Coordinated Development Districts (CDD); (3) are areas where the city is making significant capital investments such as the West End Transitway; and (4) are neighborhoods where increased investment would help increase the economic prosperity of current residents.”

“The point of opportunity zones is to de-concentrate capital from the three states where most venture capital sits — which are California, Massachusetts and New York — and redirect it through an incentive into areas that have been overlooked by investors,” Rachel Reilly of Enterprise Community Partners, an affordable housing nonprofit, told the Metropolitan Washington Council of Governments (MWCOG) last week. The point is also to attract “patient capital” by tying incentives to thresholds of time that investors must hold on to equity, according to a report from the Economic Innovation Group (EIG), which advanced the idea in 2015.

According to EIG, benefits include the temporary deferral of gains; reduction in the taxable portion by 10 percent after five years and 15 percent after seven years; and complete elimination of capital gains tax if the investor holds the reinvestment for 10 years. Over 8,000 zones will compete for investment nationwide, in hopes of encouraging greater geographic diffusion.

Over the next 10 years, private investors can receive these breaks by investing via “opportunity funds.” The private market is expected to develop funds to provide intermediary management, akin to a mutual fund company. And/or private investors can self-certify as individual funds and make their own investments, akin to buying stocks directly.

“There’s no [further] government role that’s necessitated,” said Reilly in a subsequent interview. But “[Alexandria] doesn’t need to have a role, but it definitely could, if Alexandria wanted to set up its own [publicly sponsored] opportunity fund. … If Alexandria wanted to create certain additional incentives … they could do that, and market that to investors.”

Additionally, she says local governments and other stakeholders should work on “figuring out how to best drive inclusive economic growth. Because what we’re hearing throughout the nation right now is that there’s this balancing act of, how do you ensure that local residents and businesses are benefiting from the investment and that they will not be displaced from any additional investment that comes in, while at the same time attracting this investment? … Twenty-seven percent of the residents in opportunity zones nationally pay more that half of the income on housing. What we’re urging folks [to do] is, how can states and mayors now begin planning and direct their resources to ensure that all the subsidized affordable housing stock is preserved in those opportunity zones? So having that proactive strategy on the front end, knowing that displacement is going to be a risk.”

For example, she says the state of Nebraska intends to stand up a fund to build workforce housing around its major university campuses.

“At this time, AEDP and the city are still waiting on guidance from the federal and state levels on program rules/parameters before developing specific plans for Alexandria’s four Opportunity Zones and deciding if additional local incentives will be needed,” said Touhill. He says further guidance is expected later this year.

Regarding the risk of displacement, he said that local efforts toward “increasing economic opportunity for current residents” include:

Regarding preserving affordable housing, he said: “The city would maintain its commitment to affordable housing in each of these areas adhering to existing city policies while seeking ways to leverage new private capital to ensure affordable housing options remain in these neighborhoods. City staff also plans to attend training to better understand how the opportunity zones program will impact housing-related issues and investments.”

“The promise and potential is there,” though “the Devil’s in the details,” said Reilly. “What I get concerned about is what localities are willing to give up in additional incentives to attract opportunity zone investments, and how they can ensure that they stay in the communities. Because that’s where I see sort of a race to the bottom, when states are competing against each other to attract investments across borders.”